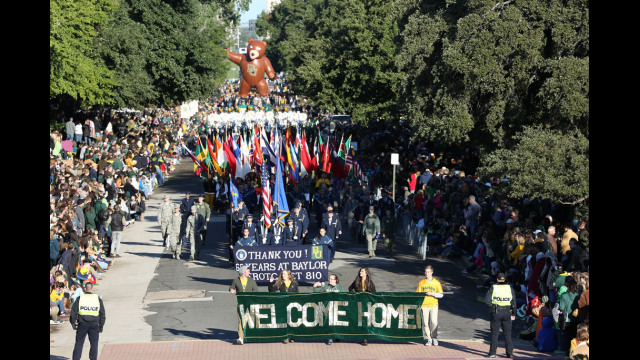 WACO, Texas (July 18, 2014) – At its annual summer meeting, Baylor University’s Board of Regents celebrated a major gift that will provide for significant renovation to the campus’s historic Fifth Street – home to many cherished University traditions, such as Homecoming, Diadeloso and Christmas on Fifth. The gift, which has an approximate value of $8 million, was made by Baylor alumnus and physician Dr. Thomas J. Rosenbalm in honor of his father and mother.

The renovations to Fifth Street will be anchored by a signature fountain that will be named in memory of Dr. Rosenbalm’s parents, the late Clarence and Claudia Rosenbalm of Bartlett, Texas.

“We are deeply grateful to Dr. Rosenbalm for his profound expression of love for Baylor embodied in this remarkable act of generosity that will further beautify our campus,” said Baylor President and Chancellor Ken Starr. “This gift will allow us to transform Fifth Street, which is so much a part of our most meaningful University traditions, and otherwise re-envision an extraordinarily meaningful space on our campus in a manner that will suitably honor the memory of Clarence and Claudia Rosenbalm and the value they attached to higher education.”

A native of Bartlett, Dr. Rosenbalm earned his bachelor’s degree in biology and chemistry in 1950 and his master’s degree in biology in 1951 from Baylor and was a member of the honorary society of Beta Beta Beta in biological sciences. He went on to complete his M.D. at Baylor College of Medicine in Houston in 1955. Upon finishing his internship in San Diego, Dr. Rosenbalm joined the United States Air Force and served for two years in Japan. The remainder of his lengthy career was spent as a family practitioner at North Shore Hospital in Houston, and he served on the board of directors of Hospital Affiliates International, now Hospital Corporation of America. He served the medical needs of East Houston until his retirement in 1985. Both his daughter, Dr. Laura R. Carpenter, B.S.Ed. ’91, M.A. in biology ’93, and son-in-law, Dr. Robert Carpenter, B.S. ’90, M.C.G. ’91, M.B.A. ’93, are Baylor graduates. Dr. Rosenbalm resides in Spring.

Project details are conceptual but the redesign is expected to include major aesthetic and infrastructure improvements to Fifth Street, as well as the addition of the Rosenbalm Fountain. The area scheduled for the improvements extends from the Bill Daniel Student Center down Fifth Street to the circular drive in front of the McMullen-Connally Faculty Center. The architect is the Office of James Burnett Landscape Architecture. Construction is expected to begin in spring 2015 and scheduled for completion by fall 2015.

Also during its summer meetings, Regents set tuition and fees for 2015-2016. Regents voted to increase undergraduate tuition for the fall 2015 and spring 2016 academic year by 5.45 percent. The adopted change in tuition for next year reflects the lowest percentage growth in two decades as the board continues to work actively to reduce tuition increases and introduce additional affordability initiatives.

A board and institutional priority continues to be funding of student scholarships, with an additional $17.7 million allocated for merit and need-based scholarships for the 2015-2016 academic year.

Regents also approved a specific affordability initiative for the 2015-2016 academic year that will increase scholarships for transfer students who are enrolled in a Baylor Bound-affiliated community college with the intent of transferring to Baylor (currently McLennan Community College in Waco and Tyler Junior College in Tyler, Texas). The new program will help Baylor Bound students fully realize the anticipated savings by first attending a community college and then completing their degrees at Baylor.

In addition, Regents approved a revised Guaranteed Tuition Option (GTO), one of the major initiatives included in the recently approved five-year goals within Pro Futuris, the University’s new strategic vision. This option gives students and their parents the opportunity to lock in a four-year tuition rate, which eliminates uncertainty about the cost of tuition and allows students and families to more accurately prepare their educational budgets. Another goal of the GTO is to help students graduate in four years.

“Since most Baylor Regents are themselves alumni, or the parents of a Baylor graduate, we are keenly aware of the tremendous value, great importance and distinctive nature of a Baylor University education,” said Richard Willis, B.B.A. ’81, M.B.A. ’82, chairman of the Board of Regents. “As a result, we are committed to doing all we can to enhance access to a high-quality Baylor experience while limiting the financial burden we place on students who wish to pursue a Baylor degree. We are working hard to reduce annual tuition increases, build our endowment so that we might provide maximum financial support and implement programs that will help students graduate in a timely manner and effectively transition from Baylor at the conclusion of their studies. With President Starr and senior leaders at the University, we continue to make great progress advancing these critically important goals.”

Baylor’s tuition and required fees continue to remain lower than peer private institutions in Texas, including Rice, Southern Methodist University and Texas Christian University and well below those of most private universities outside of Texas, such as Duke, Emory, Northwestern, Notre Dame, Pepperdine, Stanford, Tulane, University of Southern California and Vanderbilt.

In addition to providing students with the highest quality Christian education, the increase will allow Baylor to support its current operations, provide for new faculty and staff hires, create a merit raise pool for faculty and staff, fund initial five-year goal priorities within Pro Futuris and maintain a growing University campus.

The summer board retreat also included a new Regent orientation, Regent committee meetings and tours of campus facilities. Regents participating in their first board meeting were: