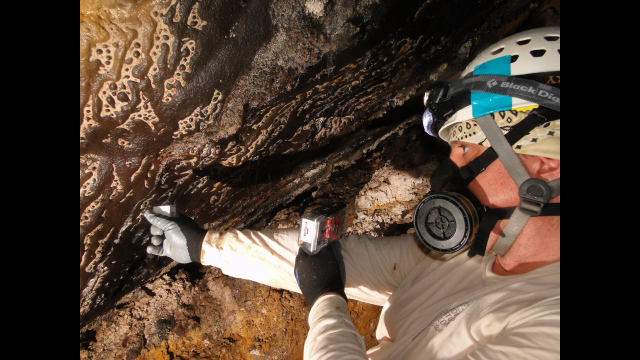 Keith Schubert studies biological patterns that could be 'universal signature'

WACO, Texas (June 23, 2014) – When looking at the series of photos on Keith Schubert's computer screen, most people will likely see what they believe is some sort of black goo arranged like an intricate maze on a rock wall.

Specifically, he sees patterns of life.

From those patterns, Schubert has developed cellular automata and differential equations that he believes can help predict the movement of biological communities as well as the health of extreme environments like deserts, caves and rivers, and, possibly, environments on other planets, like Mars.

That black goo in the photo? Those are billions of microorganisms, Schubert explained. The rock wall? That's the wall of a cave in Tabasco, Mexico. And the cave? Oh yeah, it's suffused with deadly sulfuric acid.

Schubert was invited to be a part of the research group by team leader and colleague Penelope J. Boston, Ph.D., professor of cave and karst science at New Mexico Tech and associate director of the National Cave and Karst and Research Institute. Boston is a renowned scientist and a popular TED Talk speaker who, like Schubert, studies life in extreme environments.

Boston described the expedition team as a "powerful" group of scholars and scientists with whom she'd worked individually but had never pulled together to work collectively.

"This was an opportunity to bring all of these people together for a single expedition," she said. "We had the opportunity to compare our work and see how it all fits together. Keith was a big part of that."

Schubert's role was to build custom camera equipment, mount that equipment in the cave system and study the resulting images. Those images of the cave wall, which will be taken daily over a minimum two-year period, focus primarily on the intricate patterns formed by the microbes.

He explained that biological organisms tend to congregate where life-sustaining resources are prevalent. Therefore, a dense cluster of microbes indicates that there are nutrients available in that area of the cave wall; thinner clusters of microbes reveal diminished resources; no clusters reveal a lack of resources.

So what does this mean for life outside the cave?

Schubert hypothesizes that scientists might have discovered that the patterns are a "universal signature" among biological populations, something replicated throughout the world. He has seen the same patterns many times before.

"We're finding that it doesn't matter the family of microbes or the chemistry; they all make the same patterns," he said. "All life seems to do this."

The same patterns found in the Mexican cave have been found in tidal pools in California, caves in Hawaii, in the tropics off the coast of Africa, in the cold of Alaska and in the arid deserts of Australia and Israel. The patterns are found among both plant and animal populations.

"Our general belief is that the patterns move toward stability. They harvest the resources and move on," Schubert said. "In human terms, it's the hunter-gatherer concept."

With more than 10 percent of Baylor University's freshman class pursuing major courses of study in the School of Engineering and Computer Science (ECS), the focus remains on preparing graduates for professional practice and responsible leadership with a Christian world view. ECS majors include bioinformatics, computer science, electrical and computer engineering, general engineering, and mechanical engineering. Among ECS graduate programs are Master of Science degrees in all disciplines, a Ph.D. in electrical and computer engineering, and several dual degree programs. The Teal Residential College for Engineering and Computer Science, in which students and faculty live, fosters the pursuit of wisdom, academic excellence, and meaningful relationships for the development of diverse, innovative leaders.