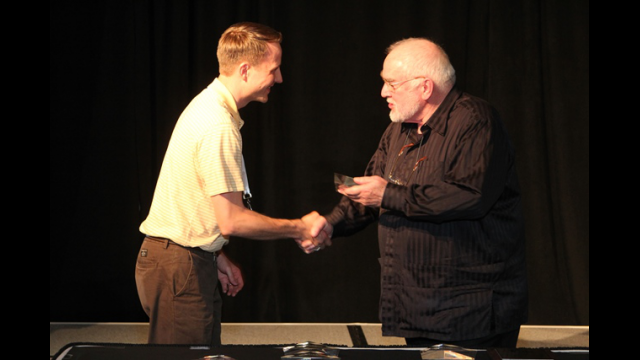 WACO, Texas (June 9, 2014) – Kent Eshelman, Ph.D., assistant professor in the department of instrumental studies, was awarded the Roger Bobo Award for Excellence in Recording for his album, Flavors.

The award, presented to Eshelman through the International Tuba-Euphonium Association, recognizes the "the very best artists, composers, and researchers who have produced work of the highest distinction in the fields of recording, composition, and research."

“I can't say exactly what set Flavors apart, but I do know that I poured my heart and soul into every detail of the project,” Eshelman said. “I found it to be an exciting creative outlet, and in many ways it was a culmination of all the work I've done in tuba performance to this point.”

Eshelman described the style of Flavors to be an array of different styles of music played on the tuba and accompanied in great part by his wife, In-Ja Song Eshelman, Ph.D., on piano.

“There is a wide variety of music on the CD, representing four different centuries as well as disparate compositional forms and styles,” Eshelman said. “Bringing together this assortment of music led me to the concept of presenting different ‘flavors.’”

The process of creating and recording his CD took about two years. Preparing and editing the compositions took months of time, both prior to and after the recording took place. Receiving a University Research Committee grant from Baylor was a huge help in getting the process off the ground, Eshelman said. When the CD was released in June of 2013, he had worked with recording studios, graphic designers, record labels, recording engineers and many more components that made the project complete.

“The international scope of the award makes it special, as well as the fact that the International Tuba-Euphonium Association presents the award only every other year,” Eshelman said. “I felt very honored to be among the finalists, and to be chosen as the winner is an extremely gratifying recognition of the hard work and creative energy that went into this project.”