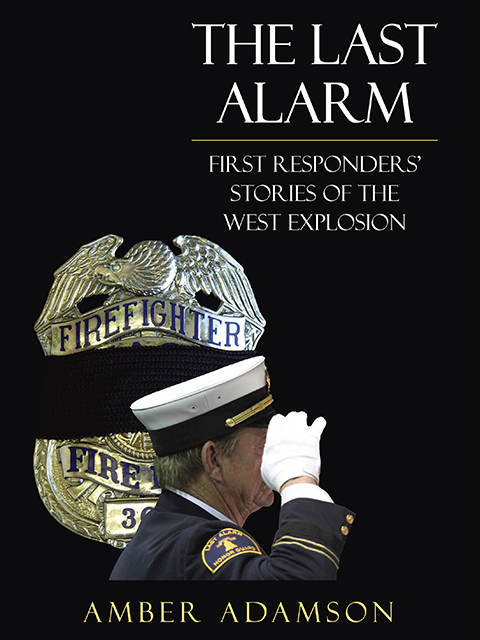 WACO, Texas (April 15, 2014) – It’s not always easy to get first responders and emergency workers to talk candidly about “the job,” particularly something as devastating as the deadly fertilizer plant explosion in the City of West one year ago this week.

In the new book, The Last Alarm: First Responders’ Stories of the West Explosion, author Amber Adamson, lecturer in Baylor’s department of journalism, public relations and new media in Baylor’s College of Arts and Sciences, chronicles the first-person accounts of more than 40 first responders and tells the story of the explosion that ripped a hole in the town and killed 12 firefighters and emergency workers.

The explosion caught the attention of the world and brought President Barack Obama to Baylor University for a memorial to honor those who died. The book is scheduled for release the first week in May.

“Everyone I talked to was so humble, so gracious, so not impressed with themselves,” Adamson said of the first responders interviewed for the book. “They don’t think that anything they do is extraordinary, but everything they all did was extraordinary.”

Adamson, whose husband is a firefighter in Waco and whose brother is a firefighter in Red Oak, said no one turned down her request for an interview. She said she believed her family relationships and experience with first responders opened doors that wouldn’t have been opened to most writers or reporters.

“As the wife of a firefighter and the sister to a firefighter, it’s given me a chance to see what the brotherhood is all about,” she said of researching and writing the book. “I tried to have as much of an understanding as possible – why first responders do what they do; why, when there’s a fire, they run toward it.”

In all, more than 140 departments or agencies from within and around Texas responded to West in the minutes, hours and days following the explosion.

Adamson said she did her best to represent men and women from every level of response – from those in the community who rushed to the flames to the members of the honor guard who stood by the bodies of the fallen and supported the families around the clock until their loved ones were laid to rest.

In addition to a comprehensive list of responding agencies, the book features transcripts of 911 calls, biographies of those who died, photos that have never been published and, of course, the stories, many of which, Adamson said, have never been told publicly.

The book was designed by Baylor graduate Stephanie MacVeigh, BA ’99, and features photos from photographers for the Baylor Lariat, the University’s student-produced newspaper. The book was edited and published by Sharon Bracken, senior lecturer in journalism, public relations and new media.

Bracken, a lifelong resident of Waco, said the book can spark an emotional response. She said she cried when she read the manuscript, particularly when reading the story of one woman, a first responder, who still felt guilt because she was talking to several of the victims just minutes before they rushed to the fire.

“We never know on any day if we’re going to get up and our lives are going to change,” Bracken said. “When you read the book, it really hits home.”

Many of Adamson’s face-to-face interviews were recorded digitally and are being transcribed and collected by Baylor’s Institute for Oral History. The transcripts and recordings will be added to The Texas Collection at Baylor.

The College of Arts & Sciences is Baylor University’s oldest and largest academic division, consisting of 26 academic departments and 13 academic centers and institutes. The more than 5,000 courses taught in the College span topics from art and theatre to religion, philosophy, sociology and the natural sciences. Faculty conduct research around the world, and research on the undergraduate and graduate level is prevalent throughout all disciplines. Visit Baylor's College of Arts & Sciences.