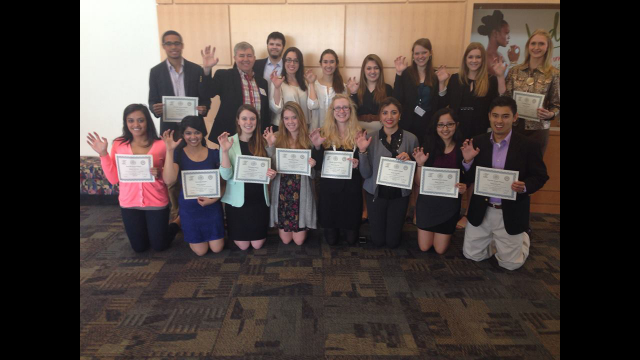 Representing Tunisia and Yemen, the Baylor team competed against teams from 12 universities from Texas, Oklahoma, Arkansas, Missouri and Louisiana.

"This was an outstanding effort by all 16 members of the team," said the team's faculty adviser Mark Long, Ph.D., associate professor of the Baylor Interdisciplinary Core in the Honors College and director of Middle East studies. "It's important to note that Baylor's Model Arab League team is not a formal class but has met as an extracurricular club. Although there is a faculty sponsor, the students themselves do the recruiting and training, providing every aspect of leadership. They have represented Baylor exceptionally well."

A highly competitive academic activity, the Model Arab League simulates meetings of the League of Arab States. Participating delegations become diplomats for the weekend and represent one of the League's 22 member states in both general and specialized councils. Students draft resolutions addressing the important regional and global issues outlined in an agenda that closely mirrors real-world Arab League issues. The resolutions are debated in moderated council sessions following rules of parliamentary procedure. If passed, these council resolutions are presented to the entire conference during a Summit Session for closing debate and a final vote.

Baylor's MAL team is sponsored by the department of modern languages and cultures and the Middle East studies program. Students Bergfield, Lawrence and Clark provide leadership and training for the team.

"I am extremely proud of everyone who competed at the conference," said Clark, a senior international studies major from Austin, who served as the team's head delegate for Tunisia. "They really took it upon themselves to further their own education. Not only were they willing to do their own research, but many of them, some of whom had never studied the Arab world or knew very little about politics, did a great job of learning on their feet and made allies during the competition. We taught them how to debate and write resolutions and, to the best of our ability, information about some of the countries, but they truly took it upon themselves to do better, and it showed."

The MAL experience is designed to deepen students' knowledge of the history, culture, religion, economics and politics of both their assigned country and the region as a whole. Through active participation in a model, students develop and sharpen skills in debate, consensus-building, critical thinking, parliamentary procedure and public speaking. By arguing the positions and foreign policy objectives of the Arab States, model participants gain personal insights and a meaningful understanding of the issues underlying U.S.-Arab relations.

"Within the Arab world, regimes are constantly changing and we as Americans, let alone well-educated humans, need to know where we stand with the changes happening," Clark said. "Egypt, alone, has had three different rulers in the past three years, each very different from each other. This affects how we trade, who we have political alignment with and our behavior towards the world. There are huge changes happening right now, good and bad, and not just in the Arab world, and we need to know about them."