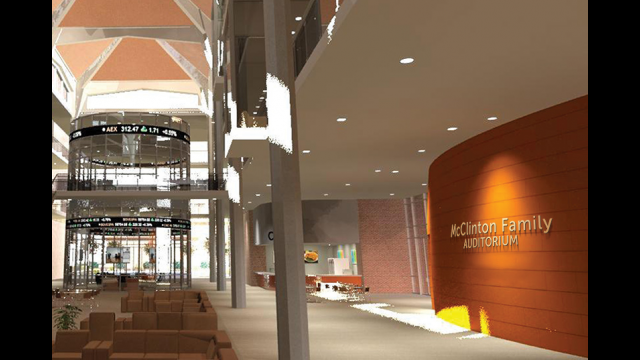 WACO, Texas (Nov. 12, 2013) - Baylor University today announced a gift of $1.5 million from Paul and Carol McClinton of Waco, Texas, that will name the McClinton Family Auditorium within the Paul L. Foster Campus for Business and Innovation, a major new facility to be constructed across from the new East Village Residential Community on Bagby Avenue between Third and Fourth Streets on the Baylor campus.

"Carol and I have had the opportunity to watch Baylor grow throughout the years from a small school into the beautiful campus it is today," said Paul McClinton, BBA '62. "I feel very fortunate that I was able to go to Baylor and gain the skills and friendships that helped me become successful in several businesses, starting with the one that I began in college. Baylor gave so much to me, and I am glad to give something back."

The $100 million, 275,000-square-foot Foster Campus for Business and Innovation will create a new home for the University's nationally ranked Hankamer School of Business. Its development was significantly advanced in June with an historic gift from Paul L. Foster, BBA '79, of El Paso. After successful fundraising for the project, Baylor Regents approved construction of the facility during their fall meeting on Oct. 18. Construction could begin as early as December.

The McClintons said they hope their support of the University's expanding dedication to business education will bolster Baylor's broader mission of preparing men and women for worldwide leadership and service. They noted that watching their son, Matthew, earn a BBA degree from Baylor in 1989 reconfirmed the power of the Baylor experience and that now, as a multi-generation Baylor family, they want to enhance that experience for future students. The McClintons also have a daughter, Melinda, who graduated from the University of Mary Hardin-Baylor.

"The generosity demonstrated by Paul and Carol McClinton through their philanthropy -- both with this gift and the many that preceded it -- testifies to their unwavering enthusiasm for Baylor University's future," said Baylor President Ken Starr. "Specifically, their support of the Foster Campus for Business and Innovation is a fitting union of their entrepreneurial spirit and the University's commitment to preparing independent thinkers whose actions are grounded in ethical principles."

The architectural design of the Foster Campus for Business and Innovation features a highly corporate and sustainable business environment, including a centerpiece atrium that will showcase some of the school's classrooms, such as the Southwest Securities Financial Markets Center. The design also includes a variety of classrooms that will incorporate the latest classroom technology for collaborative learning, innovation and problem solving. The new building is expected to expand the business school's size by nearly 40 percent.

"Paul McClinton is representative of the many business school alumni who have expressed great eagerness for strengthening the mission of the Hankamer School of Business through a new building where our innovative business programs can expand and flourish," said Terry Maness, DBA, dean of Baylor's Hankamer School of Business. "He and Carol have stayed close to Baylor over the years and have seen how a Baylor education can sharpen the mind and spirit of our next generation of forward-thinking leaders in business."

Paul McClinton grew up in Silsbee, Texas, and served as a U.S. Congressional Page in Washington, D.C., during his final year of high school before enrolling in Baylor University in 1957. After launching his first business venture as an undergraduate, he earned a BBA degree in 1962. The following year, he married Carol, a native of west Texas who had graduated from the University of North Texas. The couple went on to form a strong partnership over the following decades, supporting Paul's business ventures while raising a family in Waco. For several years, Carol taught biology and chemistry in the Lorena ISD.

Known to friends and family as "Crunch" -- a college nickname given in honor of his impressively firm handshake -- Paul McClinton has always had a passion for what he calls "the deal." He got his start in business pushing a "Goodie Cart" around Martin Residence Hall and selling advertising for the student-run newspaper The Lariat as a junior at Baylor. The following summer, he convinced the Baylor administration to give him, rather than a national company, the contract for installing and managing new vending machines on campus. And so with $750 gained from selling his car and the financial backing of a college friend's family, McClinton and his new company, Automatic Chef, were launched into the business world in the fall of 1960.

Automatic Chef's business dealings soon expanded within Waco and beyond. By the time McClinton sold the company in 1987, it had expanded to become a vending operation with annual sales of more than $5 million and about 75 percent of the market in Waco, with a reach into the Temple and Bryan-College Station areas. Following roles with several companies over the ensuing years, particularly in the areas of marketing and merchandising, he currently serves as chairman of Credit Corporation of America, based in Waco.

McClinton has worked with a wide variety of nonprofit organizations, serving as chairman of the National Automatic Merchandising Association.