The "Messy Middle": Many Evangelicals Are Ambivalent about Homosexuality and Civil Unions for Gays, Baylor Study Shows 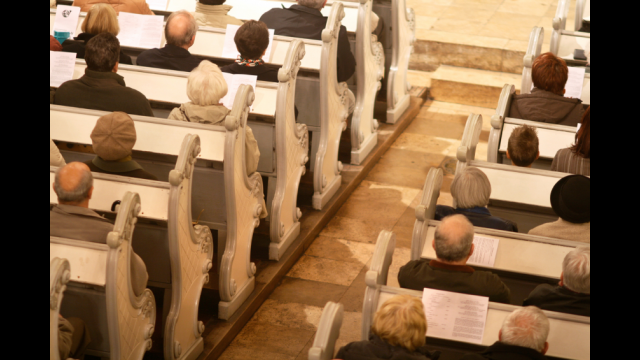 WACO, Texas (Aug. 12, 2013) -- Tolerance toward gays and lesbians is growing within the evangelical community -- long a stronghold against homosexuality -- with many expressing ambivalence, according to a Baylor University study.

The emerging voice of the so-called "Messy Middle" -- evangelicals who oppose homosexuality on moral grounds but support equal rights such as civil unions for gays -- has strong implications for the gay marriage debate, say Baylor researchers, who presented their paper Monday at the American Sociological Association's 108th annual meeting in New York City.

"As a moral issue, we predict that the opposition to gay civil rights will not have the same staying power as the abortion debate," said study co-author Brandon Martinez, a sociology researcher in Baylor's College of Arts & Sciences.

The recent apology to the gay community by Exodus International -- an evangelical parachurch ministry that had long championed the "gay cure" movement -- and its disbanding shortly after that are evidence of the shift within the evangelical community, says Lydia Bean, Ph.D., an assistant professor of sociology at Baylor. Exodus International's leader stated that the group's previous worldview was "neither honoring our fellow human beings, nor biblical."

For their study -- "How the Messy Middle Finds a Voice: Evangelicals and Structured Ambivalence toward Gays and Lesbians" -- researchers analyzed national data from the 2010 Baylor Religion Survey, a random sample of 1,714 individuals across the country. Researchers found that 24 percent of evangelicals fit into the ambivalent category, supporting gay civil unions even though they are morally opposed to homosexuality. The survey, designed by Baylor University scholars and conducted by The Gallup Organization, included more than 300 items dealing with religion and the attitudes, beliefs and values of the American public.

"We've known that moderate and ambivalent evangelicals are there, but now they are actually starting to have a voice and beginning to be more political," Martinez said.

The "Messy Middle" -- which researchers refer to as "Ambivalent Evangelicals" -- has differing views from evangelical "Gay Right Opponents," who oppose civil unions, and also from "Cultural Progressives," who support homosexual behavior and civil unions.

But when it comes to religion, "The Ambivalents have the same level of belief, church attendance, prayer life, Bible reading and friends in church as Gay Rights Opponents do," Bean said. "They're enmeshed, not peripheral. You have these people in the pews and serving as Sunday School teachers who are supportive of civil unions."

Other research findings about Ambivalent Evangelicals:

� They are similar in biblical literalism and religious practice to those who oppose civil unions, while the 35 percent who are Culture Progressives -- with positive attitudes toward homosexuality -- are less involved in such activities as church attendance, although they pray privately.

� They are more likely to be married, have lower levels of education, be biblical literalists and attend church frequently than Cultural Progressives.

� They are more likely to believe that sexuality is innate than Gay Rights Opponents but less likely than Cultural Progressives to do so.

� They are more likely to identify themselves as "born-again" than Cultural Progressives are.

Since the 1990s, evangelicals have struggled with how to "do" religion in regard to gays and lesbians, with approaches ranging from shunning homosexuals to seeking to "hate the sin but love the sinner" to openly affirming homosexuals, researchers said.

The study notes that in 2004, Christian Right groups, led by Focus on the Family and the Family Research Council, mobilized to defend traditional marriage and pass state-level referenda banning civil unions. They were joined by Exodus International, which held that homosexuality is a sin, that gays and lesbians could "overcome" homosexuality by spiritual "healing," and that sexual orientation is not biologically fixed, the researchers wrote.

They noted that in November 2012, evangelical pastor Rick Warren of the country's largest megachurch and bestselling author of The Purpose-Driven Life expressed regret for his public statements supporting Proposition 8, which banned same-sex marriages in California. Richard Cizik, spokesperson for the National Association of Evangelicals, was forced to resign in 2008 after he expressed support for same-sex civil unions on NPR's Fresh Air, the researchers wrote.