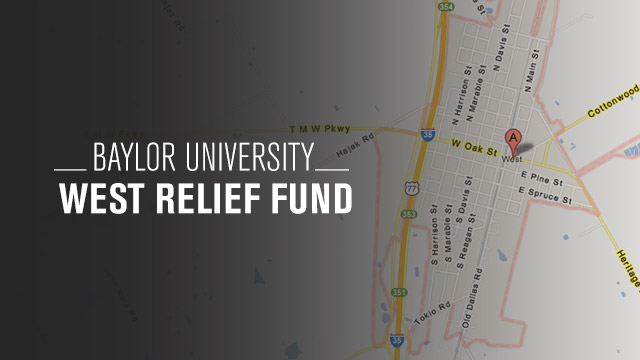 As community rebuilds after devastating explosion, more than $290,000 from Baylor fund will help homeowners with demolition of damaged homes

WACO, Texas (July 10, 2013) - Following extensive discussion with the Waco Foundation and the City of West Long Term Recovery Committee, Baylor University announced today that $290,716 in total contributions to the Baylor West Relief Fund will be allocated to First Baptist Church of West to aid the remainder of its debris removal project for the residents of West.

For the past six weeks, the church partnered with Texas Baptist Men to coordinate the demolition of 57 homes, saving local homeowners - who plan to rebuild - between $10,000 to $15,000 in debris removal costs that often are not fully covered by insurance. John Crowder, pastor of FBC West, said his church provided the funds to work with a local debris removal company, with RDO Equipment of Hewitt donating its heavy machinery for the project. Experienced crews from Texas Baptist Men, the church and the West community provided their labor for free to help with the demolition.

However, with still another 50 to 60 homes to be demolished, funds for the project at FBC West have been nearly depleted.

"When a family whose home was destroyed sees the rubble left behind, they cannot help but feel discouraged. However, when they drive by their lot after all of that rubble has been cleared away, they have hope," Crowder said. "That's what we are providing by doing the demolitions and debris removal. Not only are we helping our families and our town financially, but we are giving the people of West hope. We are extremely grateful to Baylor University and all of the donors who gave to the Baylor West Relief Fund for allowing us to bring that hope."

Only a month ago, Crowder said, all anyone could see was "devastation and destruction."

"The face of West is changing. Today, you can see real progress and the promise of a better tomorrow," Crowder said. "The Baylor family is playing a big role in making that happen. On behalf of the Long Term Recovery Committee, First Baptist Church of West and the City of West, I want to express our deepest gratitude for this generous gift."

Baylor established its West Relief Fund less than 24 hours after the massive fertilizer plant explosion rocked the town on April 17, taking the lives of 15 people, including 12 first responders, injuring more than 200 and severely damaging buildings and homes in the area. The horrific devastation personally impacted the Baylor family, as a dozen students, more than 40 faculty and staff and 262 alumni call West home.

Through Baylor's West Relief Fund, nearly 1,800 individuals from throughout the country responded to the community's great need by donating to the fund.

"This gift of $290,716 on behalf of many generous individuals across the nation represents Baylor University's care and concern for our neighbors in West," said Baylor President Ken Starr. "The University worked closely with the good people at the Waco Foundation and the City of West to determine the most meaningful way the Baylor West Relief Fund could help address the city's most pressing needs. Providentially, the funds needed by First Baptist Church of West to complete an enormous debris removal project - so local homeowners can begin to rebuild - is nearly the precise amount raised by the Baylor fund. Our prayers remain with West as residents continue to rebuild a community rightly acclaimed for its courage, strength and compassion."

Once debris removal is completed, any remaining resources will roll into the church's long-term West recovery fund.

"I can't thank Baylor enough and all those who gave to the West Relief Fund for this generous donation that goes directly to people in our community who need it," said West Mayor Tommy Muska. "It eliminates some of the cost of debris removal and allows residents, especially those under-insured, to use that money for living expenses or a down payment on a new home. The fund is a direct way to help citizens recover from disaster. It's a wonderful gesture on Baylor's part, and we are thankful for the support. They're our neighbors, too."