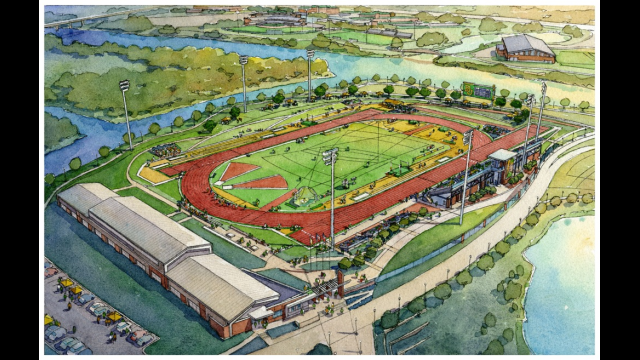 Artist's rendering of Baylor's new on-campus track and field stadium, which was approved by Baylor Regents on Friday.
Tweet
May 17, 2013

WACO, Texas (May 17, 2013) - At their spring meeting today, the Baylor University Board of Regents approved construction of phase one of a new on-campus track and field stadium and voted to move forward in developing the design for the proposed new School of Business building.

Baylor Regents gave their approval to the $13.6 million track and field stadium, which will be built along the Brazos River on the far east side of the 93-acre Baylor Stadium property. The new facility - designed by Kansas City-based Populous, which also designed Baylor Stadium - will accommodate 5,000 spectators and include a 6,000-square-foot team building containing men's and women's team locker rooms, training room, meeting room and equipment space, and a 13,500-square-foot indoor practice facility.

In April 2012, the University received a significant lead gift from former Baylor track letterman Richard Woodall, BBA '80, MSEco '81, and his wife, Donna, for the new on-campus track stadium in honor of his father and mother, Lewis and Mary Woodall. During the 1920s, Baylor track and field teams competed at Carroll Field on the Baylor campus, before moving off campus to Waco Stadium (later called Municipal Stadium) around 1940. In 1960, Baylor opened Baylor Track Stadium, now known as the Hart-Patterson Track and Field Complex on Clay Avenue near Floyd Casey Stadium.

Just as Baylor football returns to campus with the building of Baylor Stadium, so will Baylor's acclaimed track and field program with its new facility. One of the nation's most successful and prominent programs, Baylor's track and field program has produced nine Olympic gold medals, 36 NCAA championships and more than 600 All-America performances.

"We are excited about bringing Baylor track and field back to campus and constructing one of the premiere facilities in America," said Ian McCaw, director of athletics. "This project will enable Baylor track and field to build upon its long standing tradition of excellence and appeal to the next generation of elite student-athletes."

"It is a great and humbling day for the Baylor track and field family," said head track coach Todd Harbour. "It will be a huge blessing for us to be on campus with all of our other outstanding facilities. When completed, the overall facility, including the indoor workout area, will be one of the nation's finest track and field complexes. We thank all who have been involved in making this a reality."

Austin-Flintco will serve as the contractor. Construction is expected to begin this summer, with the project slated for completion in time for the spring 2015 track and field season.

The track and field stadium represents the final project in Baylor's Victory with Integrity campaign, a remarkably ambitious fundraising effort that raised more than $95 million, including $62 million to support new athletic facilities.

Following more positive reports on fundraising efforts to date, Regents voted to approve $2.8 million to continue with programming and design developments for a new 275,000-square-foot business school building. The architectural design for the new Baylor business school building features a highly corporate and sustainable business environment, including a centerpiece atrium that will showcase some of the school's signature classrooms, such as the Southwest Securities Financial Markets Center. The design also includes a 350-seat auditorium to accommodate guest lectures and special events, and a variety of classroom spaces that will incorporate the latest classroom technology for collaborative learning, innovation and problem solving. The project cost is estimated at $100 million. With continued fundraising success, the project could break ground as early as December.

In academic business, Baylor Regents approved a Ph.D. in health services research offered by Baylor's Hankamer School of Business through the Robbins Institute for Health Policy and Leadership. With Baylor's long association with excellence in the health care field, the new Ph.D. program will advance the goals of Pro Futuris, the university's new strategic vision, by promoting transformational education and compelling scholarship in the areas of health care delivery and policy. The interdisciplinary nature of the program will provide a unique opportunity to apply theoretical knowledge from the fields of statistics, economics, finance, health care and administration and provide solutions to the challenges that confront the nation's ability to deliver timely medical care in an efficient manner.

A member of the Inventors Hall of Fame, Gordon Teal (1907-2003) graduated from Baylor in 1927 with a degree in math and chemistry. He was instrumental in developing the first silicon transistor while working at Texas Instruments - an invention that revolutionized the electronics industry - and later became the first director of the National Bureau of Standards Institute for Materials Research in Washington, D.C. Teal served as a Baylor trustee from 1970-79.

After earning her bachelor's degree from Baylor in 1901 and one year later her master's degree, Dr. Hallie Earle (1880-1963) became the first female graduate of Baylor Medical School in Dallas. She later served as the first licensed female physician in McLennan County history. When she eventually retired in 1948, Dr. Earle was still the only female physician in Waco. In 1996, the Texas Historical Commission placed a marker on her grave in Oakwood Cemetery commemorating her accomplishments in the community.

"We wanted to provide these residential communities with a strong sense of identity by seeking out meaningful names that were Baylor specific, historic in nature, inspirational and timeless, and applicable to a residential college and living and learning center environment. Out of our committee's research arose the names of celebrated Baylor alumni Gordon Teal and Dr. Hallie Earle, who fit our criteria perfectly," said Kevin Jackson, Ph.D., vice president for student life. "With the endorsement of their surviving family members and now with approval of the Board of Regents, we are excited for the future of Gordon Teal Residential College and Hallie Earle Hall, which will engage a new generation of students in living, learning, leadership and life-changing service while carrying on the bold commitment to excellence, which has always been a hallmark of Baylor."

More information about Gordon Teal and Dr. Hallie Earle can be found here.

In other business, Baylor Regents approved a 2013-2014 budget of $482 million that reflects an increase of $38.6 million or 8.7 percent over the original 2012-2013 budget adopted by Baylor Regents last year. It also includes an additional $16.3 million to support merit and need-based scholarships, graduate assistantships and scholarships for graduate and professional students. Over the last four years, Baylor has increased scholarship funding for students nearly 60 percent.

"We are grateful, through God's abundant grace and the judicious stewardship of our resources, that Baylor continues to move forward boldly as a University with a very clear mission of academic excellence and Christian commitment," said Richard Willis, BBA '81, MBA '82, chair of the Baylor Board of Regents. "As we continue to enroll diverse classes of high academic standing, we remain sensitive to the costs of higher education and are committed to ensuring educational access to families with need. As we complete our first year under Pro Futuris, we remain steadfastly committed to our priorities, which include attracting and retaining talented students, faculty and staff, providing more work-study opportunities for our undergraduates and increasing the academic caliber of our graduate students by enhancing stipends for graduate assistantships."

The Board also elected three new Regents and welcomed one new Regent appointed in November by the Baptist General Convention of Texas. The new Board members who will begin their terms on June 1 are:
• Shelley Giglio, BBA '86, of Alpharetta, Ga., chief strategist and manager to the bands for sixstepsrecords and co-founder of Passion Conferences/Choice Ministries
• Larry P. Heard, BBA '80, of Houston, president and CEO of Transwestern Commercial Services
• Kathy Wills Wright, BS '85, MSEd '88, of Arlington, Va., consultant in Washington, D.C.
• Randolph L. (Randy) Pullin, BBA '82, of Houston, chief financial officer with Stedman West Interests Inc., who was elected by the BGCT

"We are profoundly blessed to be able to continue to populate the Baylor board with dedicated and enthusiastic servant leaders. These men and women bring distinct skill sets that will help guide and inform our future decision making, particularly in areas where these individuals have specific expertise," Willis said.

In addition, Willis was reelected to serve another one-year term as chair, while Robert E. Beauchamp of Houston was re-elected as vice-chair.

The Board also expressed its appreciation to Regents who have completed their terms of service on the Baylor Board of Regents: Albert C. Black Jr. of Dallas, Neal T. "Buddy" Jones of Austin, and Kelly Rapp, who completed a one-year term as the inaugural Student Regent on the Baylor board.