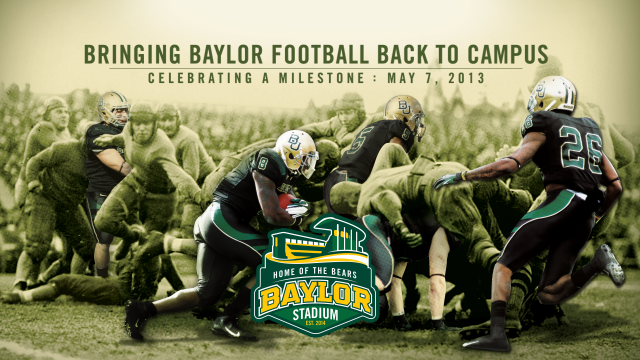 WACO, Texas (May 7, 2013) - With a backdrop of Baylor Stadium rising above the banks of the Brazos River, Baylor University today celebrated significant progress in both fundraising - at $100 million in private support - and construction on the University's $250 million on-campus football stadium which is slated to open in fall 2014.

Hundreds of dignitaries, Baylor fans and local citizens gathered on the football practice fields at the Highers Athletics Complex to hear of the significant milestones from Baylor University President Ken Starr. Just two weeks ago, Starr announced that the University had successfully raised more than $100 million for student scholarships through the President's Scholarship Initiative, and today announced more good news on the fundraising front.

"Only one year ago - on the heels of an athletic season that will be remembered for generations - we took our first step forward in this historic project. Drayton, Elizabeth and the entire McLane family provided a generous lead gift that has given rise to a period of unprecedented philanthropic support for Baylor. Additional leadership gifts followed from John Eddie and Sheridan Williams and Sheila and Walter Umphrey, which gave the University the impetus necessary to move forward with construction of this remarkable facility," Starr said.

"Over the course of the past year, Baylor Nation has risen up in record numbers and with unparalleled generosity, and today, we are privileged to announce that we have reached the $100 million milestone in private support for Baylor Stadium," Starr said.

Baylor Student Body President Kelly Rapp, who will graduate next week from Baylor, recalled the excitement of running out on the Floyd Casey field for the first time with the Baylor Line as a freshman and cheering the Bears on year after year.

"Baylor Stadium and the President's Scholarship Initiative are two examples of the passion and loyalty of Baylor Nation. For Baylor students, the future is bright and we look forward to leading the charge onto the field at the new Baylor Stadium," Rapp said.

Baylor Director of Athletics, Ian McCaw, told the gathered crowd that enthusiasm for the stadium is running high. Premium seating for the new Baylor Stadium, including Founders Suites, Premium Suites and Loge Boxes, have all sold out, with great demand expected for club seating options when they become available on June 1. McCaw also announced that season ticket sales for Baylor's forthcoming 2013 football season have been brisk, already running well ahead of this time last year.

"It is exciting to see the progress that has been made over the past year to bring Baylor football back to campus," McCaw said. "We are deeply appreciative of the generosity of Baylor Nation, and the outstanding work of our development team. Through these efforts, Baylor Stadium will open in 2014 as the most modern, student-athlete and fan-friendly college football facility in America.

"In addition to selling out the Founders Suites, Premium Suites and Loge Boxes, we have received more than 1,500 new season ticket orders for the 2013 season. The outstanding work of Coach Briles, his staff and student-athletes has inspired Baylor Nation to rise up and be a part of Baylor football," McCaw said.

When it opens in fall 2014, Baylor Stadium will be arguably the most dynamic college football stadium in America. The $250 million on-campus stadium is under construction on a 93-acre site at the intersection of Interstate 35, one of the nation's busiest highways, and the Brazos River, the longest waterway in the state of Texas. The stadium will hold 45,000 spectators, with the flexibility to expand to 55,000, and feature the Shelia and Walter Umphrey Pedestrian Bridge that will cross the Brazos and connect the stadium to the campus in the area of Baylor Law School.

"Baylor Stadium is a game-changer not only for the football program, but for our University and the Central Texas community," said Baylor Head Football Coach Art Briles. "We are grateful for everyone who has given generously in support of the stadium, as well as our University leadership for stepping forward to turn this vision into reality.

"The stadium has created tremendous excitement with our current student-athletes, as well as those we are recruiting for future success," Briles added. "People know Baylor is a great academic University but there's no question this has enhanced peoples image of the University as a whole, and they look over and say, 'Baylor's doing it right, all the way across the board.'"

Brian Nicholson, associate vice president for facility planning and construction at Baylor, said construction on Baylor Stadium is on schedule for the August 2014 opening. The contractor for the project is a partnership between Austin Commercial-Flintco LLC, which have worked on such Big 12 football facilities as Oklahoma State's Boone Pickens Stadium, Oklahoma's Gaylord Family Memorial Stadium and TCU's Amon G. Carter Stadium. The architect for the project is Kansas City, Mo.-based Populous, which has designed several stadiums, including Minute Maid Park in Houston, Yankee Stadium and the new football stadium at the University of Minnesota.

"The project is running smoothly and we are right on schedule. All of the foundations for Baylor Stadium have been installed, and today we poured and placed our 300th column," Nicholson said of the largest construction project ever undertaken in Waco and Central Texas.

Nicholson provided a series of construction highlights to illustrate the magnitude and complexity of the project. To date, Baylor Stadium crews have:
• drilled 1,129 piles, each one between 45-50 feet deep
• poured 7,000 cubic yards of concrete
• installed five miles of piping underground
• brought in 22,000 truckloads of dirt
• pumped 33 million gallons of water
• and logged 155,000 combined work time hours without a lost time accident

Over the summer, Nicholson expects work to begin on the precast seating bowl and installation of structural steel and exterior skin of the facility on the west side of the stadium.

In addition to moving football games to the Baylor campus, the Baylor Stadium project is expected to help stimulate riverfront development, revitalize downtown Waco and bring jobs and economic development to the region. During his remarks, Nicholson noted that about 50 percent of the dollars contracted to date have been spent locally.