Older People May Be at Greater Risk for Alcohol Impairment than Teens, According to Baylor Study 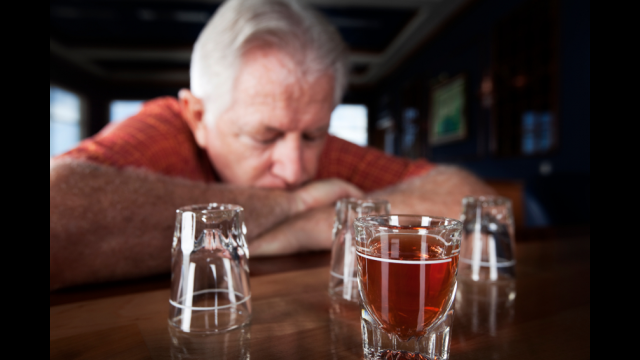 Elderly may be at greater risk of impairment from alcohol than younger people. (iStockphoto)
Tweet
April 11, 2013

WACO, Texas (April 11, 2013) -- An acute dose of alcohol may cause greater impairment in coordination, learning and memory in the elderly than in young people, according to a study by Baylor University.

Researchers said the findings have profound significance for older people --a population that is aging worldwide at an unprecedented rate and that includes Baby Boomers as they become senior citizens.

"Health implications such as falls, accidents and poor medicine-taking are pretty easy to conclude," said Douglas B. Matthews, Ph.D., senior author of the paper, published online in the journal Alcoholism: Clinical and Experimental Research. April is Alcohol Awareness Month.

In the United States, as many as 13 percent of men and 8 percent of women over age 65 engage in risky drinking behavior, with an estimated 1 to 3 percent of those afflicted with an alcohol use disorder, according to prior research. Because of improvements in medicine and public health, nutrition and education, people 65 and older will account for 20 percent of the U.S. population by the year 2030, according to U.S. Census Bureau estimates.

While previous data have indicated that aged people show significantly greater impairments than younger adults when alcohol is consumed, understanding the neurobiology underlying that increased sensitivity in the aged has been hampered by the lack of an adequate animal model, said Matthews, a research scientist in psychology and neuroscience in Baylor's College of Arts & Sciences and head of psychology at Nanyang Technological University in Singapore.

The Baylor research, the first of its kind, established a baseline of the acute effects of alcohol in aged populations, which can aid future research into neurobiology and in determining the effect of prolonged alcohol abuse.

"We know a lot of neurobiological changes occur during aging which underlie age-related cognitive and behavioral deficits. It's reasonable to suspect a significant interaction exists between age-related and alcohol-induced effects in the brain," said Jim Diaz-Granados, Ph.D., a study co-author, chair of Baylor's department of psychology and neuroscience, and chair of the Council of Graduate Departments of Psychology, a national organization.

"Our hope would be that further findings in this area will serve as a basis to educate the public regarding the risks and provide insights in the clinic," Diaz-Granados said.

Findings were presented at the Research Society of Alcoholism conference in June 2012 in San Francisco. Also conducting research in the study was Adelle Novier, a doctoral student in psychology and neuroscience at Baylor.