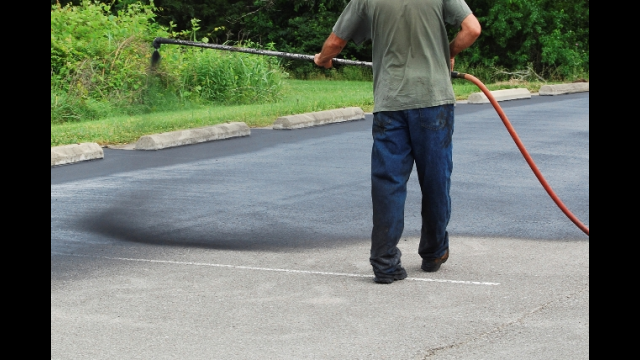 WACO, Texas (March 28, 2013)- People living near asphalt pavement sealed with coal tar have an elevated risk of cancer, according to a study in the journal Environmental Science and Technology. Much of this calculated excess risk results from exposures in children, age six or younger, to polycyclic aromatic hydrocarbons (PAHs) from the sealant.

"The increased cancer risk associated with coal-tar-sealed asphalt (CSA) likely affects a large number of people in the U.S. Our results indicate that the presence of coal-tar-based pavement sealants is associated with significant increases in estimated excess lifetime cancer risk for nearby residents," said E. Spencer Williams, Ph.D., principal author of the study and Baylor University assistant research scientist at the Center for Reservoir and Aquatic Systems Research in Baylor's College of Arts & Sciences.

Researchers from Baylor University in Waco, Texas, and the in Austin, Texas, are the first to report on the potential human health effects of PAHs in settled house dust and soil in living spaces and soil adjacent to parking lots sealed with coal-tar-based products.

"Exposure to these compounds in settled house dust is a particularly important source of risk for children younger than six years of age, as they are expected to ingest this material at higher rates," Williams said. "This indicates that the use of coal-tar-based pavement sealants magnifies aggregate exposures to PAHs in children and adults in residences adjacent to where these products are used and is associated with human health risks in excess of widely accepted standards."

Data on PAHs in settled house dust used for this analysis were published previously by the same authors. In that study, settled house dust and parking lot dust were sampled for 23 ground-floor apartments in Austin, Texas. The parking lot surfaces adjacent to the apartments were coal-tar-sealed asphalt, asphalt-based sealant over asphalt pavement, or unsealed concrete. Concentrations of PAHs were 25 times higher in house dust in residences adjacent to coal-tar-sealed pavement compared to those with other pavement types. "This study was the first to find a strong association between a product or a behavior and PAHs in house dust," said Barbara Mahler, the USGS research hydrologist who oversaw the study.

For this study, doses and risk associated with residences adjacent to unsealed asphalt lots were considered relative to those adjacent to (CSA) parking lots. Benzo(a)pyrene concentrations in CSA-affected settled house dust were high relative to those reported in most parts of the U.S. where coal-tar-based sealcoat is not used (California and Arizona). Data for PAHs in coal-tar-sealed asphalt-affected soils and unsealed asphalt-affected soils are available from samples from New Hampshire and suburban Chicago.

The analysis did not consider exposure to the dust on the pavement itself, which has PAH concentrations 10s to 100s of times higher than those in house dust or soil, or inhalation of air over sealed pavement. "Over time, about half of the PAHs in the sealcoat are released into the air, and concentrations in air are extremely high, particularly in the hours to days after application," said Peter Van Metre, USGS research hydrologist and author of two papers on volatilization of PAHs from sealcoat.

Sealcoat is a black, shiny substance sprayed or painted on the asphalt pavement of parking lots, driveways, and playgrounds to improve appearance and protect the underlying asphalt. An estimated 85 million gallons of coal-tar-based sealant are applied to pavement each year, primarily east of the Continental Divide in the U.S. and parts of Canada. Coal-tar-based pavement sealants are 15 to 35 percent coal-tar pitch, which has been classified as a human carcinogen by the International Agency for Research on Cancer. Over time, the dried sealant is worn away from pavement surfaces, and the resulting mobile dust particles can be transported into nearby homes.

"Although the analysis presented here is based on a limited dataset, the results indicate that biomonitoring might be warranted to characterize the exposure of children and adults to PAHs associated with coal-tar-based pavement sealant," Williams said. "Further investigation is also needed into the impacts of coal-tar-based pavement sealants on PAH concentrations in indoor and outdoor environments."

The College of Arts & Sciences is Baylor University's oldest and largest academic division, consisting of 26 academic departments and 13 academic centers and institutes. The more than 5,000 courses taught in the College span topics from art and theatre to religion, philosophy, sociology and the natural sciences. Faculty conduct research around the world, and research on the undergraduate and graduate level is prevalent throughout all disciplines. Visit www.baylor.edu/artsandsciences