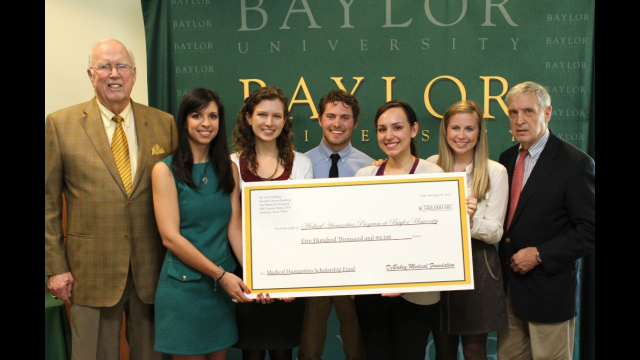 WACO, Texas (Feb. 21, 2013) - During a special campus ceremony today, Baylor University accepted a $500,000 gift from the DeBakey Medical Foundation to expand the Michael E. DeBakey, Selma DeBakey and Lois DeBakey Endowed Scholarship in Medical Humanities. With this gift, the Foundation has invested $1 million in the DeBakey Scholarship fund, which was established in 2009.

"On behalf of the DeBakey family, this magnificent gift is yet another compelling testament to their leadership and commitment to invest in meaningful health care and the effective education of future leaders in the medical profession," said Baylor University President Ken Starr. "This generous gift from the DeBakey Medical Foundation will expand the good work already being done in conjunction with the DeBakey name, and we offer our deepest gratitude for the immediate and future impact of the Foundation's generosity through this scholarship."

The Michael E. DeBakey, Selma DeBakey and Lois DeBakey Endowed Scholarship Fund in Medical Humanities benefits Baylor students pursuing studies in Medical Humanities. Students awarded the scholarship are designated as "DeBakey Scholars" to carry on the legacy of a family that revolutionized the field of medicine.

"Dr. Michael E. DeBakey was a great scholar and a great believer in this program that you have here at Baylor University," Noon said. "I started medical school about 50 years ago and all the information I have gathered over 50 years of on-the-job training, your students will be able to get in four years; so we are very happy and pleased to help fund this program."

Humanities, the arts and the human condition

The Medical Humanities program at Baylor University incorporates the insights of disciplines ranging from literature to economics to religion into the practice of modern scientific medicine. By providing a broad base of knowledge about the human experience, the program produces students with the scientific background, as well as the human understanding, that will result in physicians able to care for their patients' well-being in addition to their wellness.

"I was thinking on the way over here of how far the Medical Humanities program has come in such a short time," said Lee C. Nordt, Ph.D., professor of geology and dean of the College of Arts and Sciences at Baylor. "Medical Humanities is a program that is now on the cutting edge and that other programs across the country are trying to emulate. We are indebted to Dr. Noon and Gale Galloway. We owe a great deal of thanks to these two men.

"The DeBakey Medical Foundation has invested $1 million in scholarships, specifically for Medical Humanities. It validates the program to have that type of support from a world-renowned medical foundation," Nordt said.

"Dr. DeBakey's name is one of the most prestigious in all of American medicine, so we are particularly thrilled to have the support of the DeBakey Foundation," said Lauren A. Barron, MD, lecturer and associate director of Medical Humanities at Baylor. "Such a generous gift will go a long way to help us in our mission to bridge the art and science of medicine and to prepare Baylor students who not only excel in the sciences, but who also understand medicine as a sacred vocation."

"Receiving the DeBakey Scholarship was an incredible gift," Jones said. "Due to an illness in my immediate family and my younger sister starting college, I needed to find a way to help support my education. I already worked the hours I could afford that still allowed me to keep up with the extremely high demands of pre-med course work, so the scholarship was a huge relief and a blessing. I am so grateful for the DeBakey's belief in my education and investment in my future."

"I became a believer in Baylor in 1948," Galloway said. "There hasn't been a single day since that time that Baylor hasn't been in my thoughts and prayers and sometimes in my deeds. I've seen over and over again the great commitment of Baylor people throughout this University and our country. I know that you can judge a university by its graduates, and our graduates have done very well."

In a career that spanned seven decades, Dr. Michael E. DeBakey has been acclaimed as a founder of cardiovascular surgery and a true Renaissance man. Because of his work, once impossible life-saving procedures, such as coronary artery bypass, now are common operations. As a result of his World War II military service, he helped develop Mobile Army Surgical Hospitals to accommodate the wounded more quickly, and he later helped establish the Veteran's Administration Medical Center Research System.

In addition, DeBakey worked with his sisters to pioneer a new discipline, medical communications education. Lois and Selma DeBakey are both professors of scientific communication at the Baylor College of Medicine in Houston, and they developed a curriculum to teach doctors to think, read and write critically, and to express their ideas in clear, concise and cohesive language. Recognizing the importance of effective communication with patients as well as the medical community, the DeBakey family sought to fill the void.

"We believe that the Medical Humanities Program at Baylor is helping to revolutionize healthcare, one student at a time," Barron said. "The legacy of a gift like this to a new generation of physicians that begin their training here at Baylor University is priceless. There's no question in my mind that Dr. DeBakey would be proud of what we're doing at Baylor in answer to the challenges facing modern medicine."

A few months before he died in 2008, DeBakey received the Congressional Gold Medal, rounding out his collection of some of the most significant awards an American citizen can receive, including the Presidential Medal of Freedom with Distinction, the National Medal of Science and the prestigious Lasker Research Award.

Before being recruited by Baylor College of Medicine in 1968, Selma DeBakey was the founding director of the Editorial Department of the Ochsner Clinic and Foundation in New Orleans and the founding editor of the Cardiovascular Research Center Bulletin, Ochsner Clinic Reports and guest editor of a number of peer-reviewed medical journals.

Lois DeBakey was professor of scientific communication at Tulane Medical School when she was recruited by Baylor. Earlier, she was Editor of Tulane Studies in English.

Together, the DeBakey sisters pioneered the teaching of biomedical communication and conducted the first medical school curriculum-approved courses in this subject; they have since conducted courses by invitation of major medical schools and meetings throughout the United States and abroad. They have published numerous medical books, chapters and articles on writing, editing, publishing, visual supplements, ethics and related subjects. Their publications are considered classics and have been translated into a number of foreign languages.

Selma DeBakey received the Distinguished Service Award of the American Medical Writers Association and, with Lois, has served on the boards of various other professional organizations. Lois was named Distinguished Alumna by her alma mater, Newcomb College.

They have also served on various editorial boards, including those of the Journal of the American Medical Association and the Methodist DeBakey Cardiovascular Journal, as well as on the Methodist DeBakey Heart and Vascular Center Advisory Council, National Library of Medicine Board of Regents, American Heritage Dictionary Usage Panel and consultants to the Encyclopedia Britannica Medical and Health Database.