Drayton McLane Jr. Honored as a Founder of Baylor University 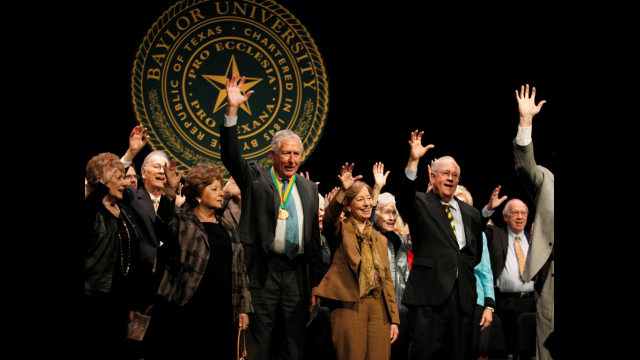 WACO, Texas (Feb. 11, 2013) - Baylor University presented the Baylor Founders Medallion to Regent Emeritus and Baylor alumnus, Drayton McLane Jr. during today's Founders Day ceremony in Waco Hall. As one of the University's most distinguished awards, the Founders Medal was established in 1969 to recognize men and women whose service and contributions have been unusually significant to the life and future of the University.

Reserved for those whose lives have been a testimony to their love of the University and the Baylor family, these "founders" have come to represent what is best about Baylor in their respective communities.

"Baylor's three principal founders were men of courage and of conscience. They were leaders; they were visionaries; and they sacrificed," said Baylor President Ken Starr, as he briefly recounted Baylor's history at the Founders Day ceremony. "What makes a Founder? First, and close to the great success of Drayton McLane, leadership; second, vision; and third, sacrifice to accomplish what needs to be done. If there is anyone deserving of the distinction of Baylor Founder, it's Drayton McLane."

McLane's enduring relationship with Baylor University began during his years as a Baylor student. After graduating in 1958 with a bachelor of business administration degree, McLane went on to earn a master's degree from Michigan State University before beginning his career as an entrepreneur. In the spirit of the verse, "to whom much is given, much is required," McLane has remained a determined advocate for the growing needs of his alma mater and has advanced the University's mission through generous support.

As an expression of their own distinct passions and desire to propel students forward, McLane and his wife, Elizabeth, have supported several areas across campus. Their unwavering generosity is evidenced from the McLane Student Life Center to the gold leaf finish upon the dome of Pat Neff Hall. Their wholehearted support of Baylor's future was most recently demonstrated through the lead gift for Baylor Stadium, which is the largest capital gift in Baylor's history.

"Integrity is the cornerstone of Drayton's life, but also philanthropy is very important. He has given thousands and thousands of gifts to organizations where he could take care of people and show the love of Christ," reflected Richard Willis, chairman of the Baylor Board of Regents. "Drayton, thank you for living your life as a man of God. Thank you for your integrity, your honesty, your philanthropy, your service. Thank you for all you've done for Baylor for more than five decades. This is a terrific day for all of us and we are very proud to be able to honor you."

McLane, who was recognized as a Baylor Regent Emeritus for his visionary guidance and years of service on the Board, has received many honors, including the Herbert H. Reynolds Award for Exemplary Service and the W.R. White Service Award. For consistent philanthropy and unparalleled service to the University, the McLanes have been honored in Baylor's Endowed Scholarship Society, The Medallion Fellowship, 1845 Society, Friends of Truett Seminary and the Athletic Director's Club. As servant-leaders in word and deed, they have demonstrated loyal support through membership in several organizations, including the Baylor Bear Foundation, Fast Break Club and Tip-Off Club and service on boards that champion the success of current and future students, such as The President's Scholarship Initiative Steering Committee.

"This is a day when we truly celebrate the great history of Baylor University - the men and women who have gone before us and those who carry forward our legacy," said Kenneth L. Hall, senior vice president for University Development and Strategic Initiatives. "Drayton McLane has given his all to make a difference in our world. We are honored to say to Drayton and his family, 'Well done.'"

Beyond his steadfast commitment to Baylor University, McLane also has exhibited extraordinary leadership acumen through a variety of business ventures. Following college, McLane joined his family's business, McLane Wholesale Grocery Business Co. and worked diligently until he eventually succeeded his father as president and CEO of the company in 1978. Through honesty, integrity and great humility, McLane grew the business into a $7 billion enterprise before selling the company to family friend Sam Walton. McLane served in executive positions until 1993 when he founded the holding company, the McLane Group. McLane also bought the struggling Major League Baseball franchise, the Houston Astros, during this time and helped lead the team to win several division titles and advance to the World Series for the first time in the team's history.

"We have the foundation we have here today and a glorious future in front of us," McLane said, as he accepted the honor of the Baylor Founders Medal. "For myself, my wife, Elizabeth, and our family, it is an honor to be associated with Baylor - to help move it forward and hand it off to the next generation better than we found it."

Both of McLane's sons, along with his sister and niece, have carried on the Baylor family tradition and are proud alumni.

The face of the Founders Medal bears the likeness of Judge R.E.B. Baylor, with the inscription, "Pro Ecclesia Pro Texana." The obverse bears the likeness of Pat Neff Hall. A copy of the medal is on permanent exhibit in the National Numismatic Collection, Smithsonian Institution, Washington, D.C.

Baylor University is a private Christian University and a nationally ranked research institution, characterized as having "high research activity" by the Carnegie Foundation for the Advancement of Teaching. The University provides a vibrant campus community for approximately 15,000 students by blending interdisciplinary research with an international reputation for educational excellence and a faculty commitment to teaching and scholarship. Chartered in 1845 by the Republic of Texas through the efforts of Baptist pioneers, Baylor is the oldest continually operating university in Texas. Located in Waco, Baylor welcomes students from all 50 states and more than 80 countries to study a broad range of degrees among its 11 nationally recognized academic divisions. Baylor sponsors 19 varsity athletic teams and is a founding member of the Big 12 Conference.