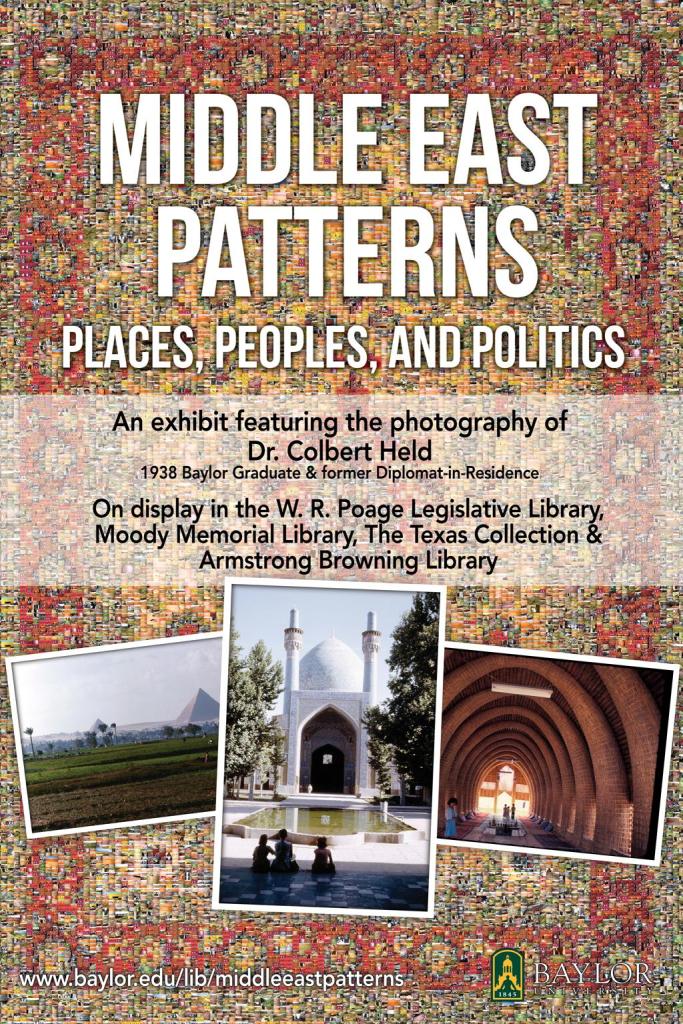 An opening reception for the exhibit will be held from 2 to 3:30 p.m. Thursday, Feb. 7. It is free and open to the public.

Held and his wife, Mildred, were based out of Lebanon during their years with the State Department but spent time in several Middle Eastern countries, including Saudi Arabia and Iran. An avid photographer, especially of geographical subjects, Held shot color slides from the air and on the ground everywhere he traveled, amassing a unique collection of 19,000 Kodachrome slides of the Middle East that portray the people and culture of this area.

"My fascination began during my doctoral studies in political geography in the late 1940s, when the Arab-Israel conflict became momentous and my colleagues debated the situation pro and con," Held said. "But my real passion for the region evolved a decade later as I traveled around the various countries [16 of them], from Turkey to Egypt and Iran to Yemen."

Held has published work previously, but this is the first time his photography will be publicly recognized. The name of the exhibit came from Held's book, Middle East Patterns: Places, Peoples and Patterns, published in 1989 with John Thomas Cummings. The book, now in its fifth edition, takes a look into the geography and culture of the Middle East.

"What makes the exhibit so unique is that it comprises photographs taken by one person - an experienced but not professional photographer - over more than half a century, with many photos showing changes in specific sites," Held said. "Also, exhibit photographs are all from film, from Kodachrome film slides, not from digital images - another reason that the exhibited prints, some 2 feet by 3 feet, are remarkable."

"Corinne brought a fresh eye to the task," Held said. "I had seen most of the images dozens of times and had the viewpoint of an academic geographer."

The Middle East Patterns exhibit will extend beyond the Poage Library to include Moody Memorial Library, The Texas Collection and Armstrong Browning Library.

John Wilson, director of The Texas Collection, encourages visitors to view the exhibit from the perspectives of both art and story.

"The items we selected for The Texas Collection are all landscapes," Wilson said. "It takes you on a geographic journey of the Middle East. I think it's the color, the expanse of the country and the romance of traveling abroad."

The exhibit is sponsored in part by Aramco Services Co., based in Houston. Aramco Services Co. is the U.S.-based subsidiary of Saudi Aramco, the state-owned oil company of the Kingdom of Saudi Arabia and a fully integrated, global petroleum and chemicals enterprise. ASC's geographical area of responsibility extends throughout North America, with operations in the U.S. and Canada, and selected activities in South America.

When Held retired from the Foreign Service in 1976, he was invited by then-Baylor President Abner McCall to return to Waco after nearly 40 years to join the Baylor faculty as diplomat-in-residence and professor in political geography, Middle East history and cultural geography. He retired in 1994 but continued to teach courses for another decade on the Middle East and various aspects of geography in the Baylor Continuing Education program.

The Baylor University Libraries support excellence in teaching and learning, enhance research and discovery, and foster scholarship and success. Through its Central Libraries and special collections - Armstrong Browning Library, W.R. Poage Legislative Library and The Texas Collection - the Libraries serve as academic life centers that provide scholarly resources and technological innovation for the Baylor community and beyond.