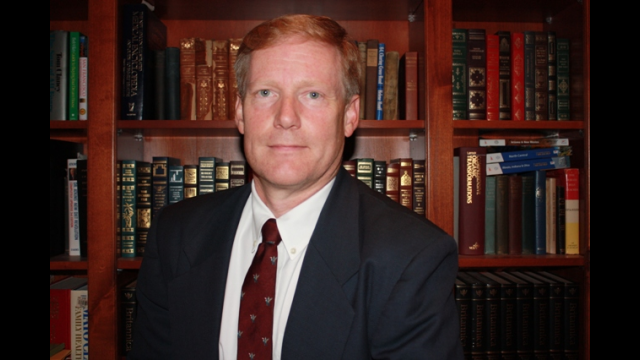 WACO, Texas (Dec. 17, 2012) - World-renowned chemist, John L. Wood, PH.D., has been named by Baylor University as The Robert A. Welch Distinguished Professor of Chemistry. His appointment is made possible in part by a $4.2 million grant from the Cancer Prevention and Research Institute of Texas (CPRIT).

In making the announcement, Dr. Elizabeth Davis, executive vice president and provost at Baylor University, said, "Dr. Wood is an outstanding scientist and educator. He has an impressive academic research career and a great reputation as a teacher and mentor. Dr. Wood has a passion for chemistry, and his work promises to push forward the frontiers of cancer research."

Wood, who also will be Baylor's CPRIT Scholar in Cancer Research, will join the faculty of Baylor's Department of Chemistry and Biochemistry in the College of Arts & Sciences in 2013, where he will relocate his laboratory from Colorado State University.

Lee Nordt, Ph.D., Dean of the College of Arts & Sciences, is excited about the prospect of having a researcher of Wood's caliber on campus. "His presence will not only enhance the reputation of Baylor in general, but of the health sciences more specifically, consistent with expectations articulated in Baylor's new strategic plan Pro Futuris," Nordt said.

Obtaining a CPRIT grant for Wood's recruitment speaks to his high visibility and reputation in natural products synthesis and methods development, both of crucial importance to modern drug design.

"Bringing a scholar of Dr. Wood's stature is a major coup for Baylor," said Pat Farmer, Ph.D., professor and chair of the Department of Chemistry and Biochemistry at Baylor.

"His research is famous among synthetic organic chemists for its elegance and originality. He has had an impressive academic career, earning tenure and full professorship at Yale before moving to Colorado State, where he serves as A. I. Meyers Professor of Chemistry."

The CPRIT funding includes the establishment of a CPRIT Synthesis Facility at Baylor that will offer rapid automated chemical synthesis that should appeal to new start-up companies and the existing Texas research community. It also will provide a service for researchers from around the state to submit drug candidates for purity validation and to be packaged in a format suitable for biological screenings.

Baylor has had a Welch Chair since 1965, indicative of the University's long-term commitment to chemical research. Wood replaces the late Dr. Gordon Stone, another renowned synthetic chemist.

"World-class research in an academic institution requires dedication from the faculty and students engaged in the research and commitment from the institution and funding agencies that provide the infrastructure and support," Wood said. "Our move to Baylor represents a true opportunity for my research team to become a part of what is clearly a steadfast and continuing commitment to academic excellence, and I am truly excited at the prospect of helping Baylor to become one our country's premier research institutions."

Wood was the Parke-Davis Distinguished Michigan Lecturer in 1997 and received a Novartis Chemistry Lectureship and an Alfred P. Sloan Fellowship in 1997. He served as the guest editor for the Tetrahedron Symposium in Print on Synthetic Methods V and as a visiting Professor at the University of Auckland. In 1998,Wood was the recipient of research awards from the Bristol-Myers Squibb Foundation, the Yamanouchi USA foundation, and received the Zeneca Excellence in Chemistry Award. In 2000, he received a Merck Faculty Award and in 2001 he was awarded The Kitasato Institute's Microbial Chemistry Medal. He was invited to the executive board of editors for Tetrahedron publications in 2002 and is associate editor for Tetrahedron Letters. Wood was named as a 2004 Cope Scholar by the American Chemical Society, a Fellow to the Japanese Society for the Promotion of Science in 2008 and received the Katritzky Award from the International Society of Heterocyclic Chemists in 2009. In 2011, he was elected to the Board of Editors for Organic Syntheses.

The College of Arts & Sciences is Baylor University's oldest and largest academic division, consisting of 27 academic departments and 13 academic centers and institutes. The more than 5,000 courses taught in the College span topics from art and theatre to religion, philosophy, sociology and the natural sciences. Faculty conduct research around the world and research on the undergraduate and graduate level is prevalent throughout all disciplines.