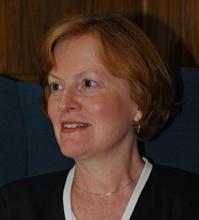 Beverly Roberts Gaventa, Ph.D., will join Baylor from Princeton Theological Seminary in fall 2013 as Distinguished Professor of New Testament Interpretation in the department of religion.

WACO, Texas (Dec. 11, 2012) - Baylor University Executive Vice President and Provost Elizabeth Davis, Ph.D., has announced the appointment of Beverly Roberts Gaventa, Ph.D., as Distinguished Professor of New Testament Interpretation in the department of religion at Baylor University. Dr. Gaventa currently serves as Helen H.P. Manson Professor of New Testament Literature and Exegesis at Princeton Theological Seminary, where she has taught for 21 years. She will join Baylor beginning in fall 2013.

Dr. Gaventa received her Ph.D. from Duke University under the supervision of W.D. Davies and her M.Div. from Union Theological Seminary in New York, where she studied with J. Louis Martyn and Raymond E. Brown. She holds Honorary Doctorates from Christian Theological Seminary and Kalamazoo College. She also is an honorary professor of New Testament at Stellenbosch University in South Africa.

Prior to teaching at Princeton Seminary, Dr. Gaventa taught at Columbia Theological Seminary in Atlanta and at Colgate Rochester Divinity School in Rochester, N.Y. She is the author or editor of 14 books, including From Darkness to Light: Aspects of Conversion in the New Testament; Mary: Glimpses of the Mother of Jesus; Our Mother Saint Paul; and commentaries on the Thessalonian correspondence and the Book of Acts. She also has published more than 70 articles and essays and is currently writing a commentary on Paul's Epistle to the Romans for the widely acclaimed New Testament Library Series. In addition, Dr. Gaventa is the author of the popular "Take and Read" book review column for The Christian Century. She is in much demand as a speaker and has lectured on university and seminary campuses around the world.

"Distinguished Professors have a unique role in helping to clarify and articulate Baylor's mission to be a research university with a distinctively Christian identity," Provost Davis said. "The serious study of the Bible is a central part of that identity, and Dr. Beverly Gaventa has established herself as one of the leading New Testament scholars in the world who engage in theological interpretation of the Christian Scriptures. She brings to Baylor a sterling reputation as a scholar/teacher, and she will, in splendid ways, build on the legacy left by her predecessor, Dr. Charles H. Talbert, Distinguished Professor of Religion Emeritus."

"We are so pleased that Dr. Gaventa is joining the Baylor faculty," said Robyn Driskell, Ph.D., Divisional Dean, College of Arts and Sciences. "With her distinguished record, she will most assuredly enhance the work of both the religion department and the College."

About her election to the Baylor faculty, Dr. Gaventa said, "I am genuinely honored by the invitation extended me by Baylor University, and I look forward to joining the vibrant New Testament program at Baylor, where I have had strong conversation partners for many years."

"Our New Testament area has long been at the heart of what we do," said Bill Bellinger, Ph.D., professor chair of the religion department and The W. Marshall and Lulie Craig Chairholder in Bible. "With the addition of Dr. Gaventa to our existing New Testament graduate faculty of Kelly Iverson, Bruce Longenecker, Lidija Novakovic and Mikeal Parsons, our New Testament doctoral program has secured its place among the elite programs in New Testament throughout the English-speaking world."

"I am delighted that Beverly Gaventa will be joining the New Testament team at Baylor University," said Bruce Longenecker, Ph.D., The W.W. Melton Chair in Religion. "Her obvious strengths will dovetail perfectly with our corporate vision and will greatly enrich our community of scholars. I have been a fan of hers for years now, and I look forward to being her colleague for years to come."

"We are thrilled to welcome Beverly Gaventa and her husband Bill to the Baylor community," said Mikeal Parsons, Ph.D., professor and Macon Chair in Religion. "Dr. Gaventa has earned international recognition for her work, and she will immeasurably strengthen our program in religion here at Baylor."

Dr. Katherine Sakenfeld, a close friend and long-time colleague of Gaventa's, noted that Baylor has gained an exemplary scholar-teacher from Princeton Seminary.

"Beverly Gaventa is not only an internationally recognized scholar, but also a truly accomplished teacher," said Sakenfeld, who serves as William Albright Eisenberger Professor of Old Testament Literature and Exegesis at Princeton Seminary. "All of her work, both writing and teaching, is characterized by fairness, insight, rigor, openness and mutual respect; Baylor's faculty will be greatly enriched by her generous presence."

Distinguished colleagues in the field of New Testament scholarship have also lauded the appointment.

"Beverly Gaventa is a gracious and collegial conversation partner who will be a wonderful addition to the community of scholars at Baylor. I have known and valued Beverly as a colleague in the field for the past 30 years, and I hold her work in high regard. Her scholarly writings are consistently thoughtful, well-researched, balanced and illuminating. Beverly exudes poise, professionalism and dignity. Baylor University is to be congratulated on its good judgment in appointing Dr. Beverly Gaventa to the post of Distinguished Professor."
-Richard Hays, Dean and George Washington Ivey Professor of New Testament at Duke Divinity School

"Beverly Gaventa's scholarly contributions are of the highest order. She has published significant work for the academy and wider church, especially in Acts and in Paul. She has participated regularly in scholarly exchange in the Society of Biblical Literature and Studiorum Novi Testamenti Societas and has long been a much sought-after lecturer. Clearly, Beverly will be a great asset in helping Baylor University achieve its goal to be a leading research university."
-Joel B. Green, Professor of New Testament Interpretation & Associate Dean for the Center for Advanced Theological Studies at Fuller Theological Seminary

"Beverly Gaventa is an exceptional mentor, a widely published scholar, and a leader among American biblical scholars. Her appointment insures that Baylor will continue to move up in the ranks of the leading programs for biblical research in the country."
-Alan Culpepper, Dean of Mercer University's McAfee School of Theology

"The appointment of Beverly Gaventa brings to Baylor an internationally recognized New Testament scholar who is also a great teacher and engaged community member. Beverly has served as a mentor for innumerable students and budding New Testament scholars, and Baylor students will now be the beneficiaries of her many gifts. Her work on Paul sets high standards for clarity and theological acumen, and her scholarly perspectives now will enrich the intellectual conversations at Baylor. Congratulations to Baylor on a great appointment."
-Gail O'Day, Dean and Professor of New Testament and Preaching at Wake Forest University School of Divinity

Dr. Gaventa is married to William (Bill) Gaventa, who currently serves as Director of Community and Congregational Supports at the Elizabeth M. Boggs Center on Developmental Disabilities, and Associate Professor, Pediatrics, Robert Wood Johnson Medical School in New Jersey. They have a son, Matthew, a daughter-in-law, Sarah, and a grandchild, Charlie.

ABOUT THE DEPARTMENT OF RELIGION

The Department of Religion at Baylor University offers courses of study in Biblical, Historical and Theological Studies at the graduate and undergraduate levels as well as courses in Practical Studies and World Religions at the undergraduate level. Many of the department's undergraduate religion majors and minors go on to pursue professional or graduate degrees, vocations in ministry and missions, medicine, law and business, or serve in a variety of university and seminary settings throughout the world. Since 1966, Baylor's doctoral program in religion has graduated more than 320 Ph.D.'s, with more than 50 students currently pursuing doctoral studies in religion. The department is well known for its academic rigor. Based on book publications, citations per publication and citations per faculty member, Academic Analytics recently ranked the Baylor doctoral program in religion in the top 10 nationally. The department's outstanding faculty also teach general education courses in Christian Scriptures and Christian Heritage to more than 3,000 students a semester. For more information, visit www.baylor.edu/religion.