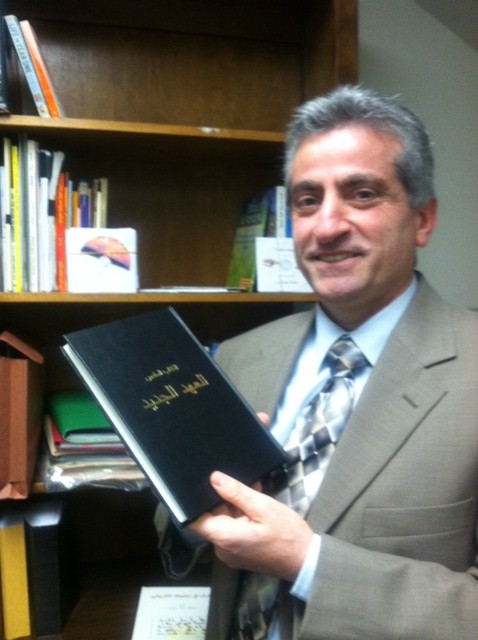 WACO, Texas (Nov. 8, 2012) - A former monk/civil engineer/business manager, who now teaches Arabic at Baylor University, has translated the New Testament for the first time into Arabic -- one of the fastest-growing languages on Twitter -- directly from what most scholars believe was Jesus' primary language.

Arabic is the world's fifth most common language, according to Wikipedia, and enrollment in its study has soared at U.S. colleges and universities, according to the Modern Language Association.

Abdul-Massih Saadi, Ph.D., a lecturer in Arabic in Baylor's College of Arts & Sciences, said his 12-year undertaking has been "a good struggle" to translate the text into two versions -- Modern Standard Arabic as well as a colloquial Arabic dialect -- in the volume.

Saadi's 800-page project meant not only poring over original texts rather than the English of the King James Version or the New International Version, but also holding the colloquial Arabic version up for scrutiny by people ranging from educated to illiterate to be certain it meshed with the language they speak and understand -- including idioms.

"Our translation is the first Arabic Bible based on Eastern Bible tradition, namely the Syriac," said Saadi, who is from Aleppo, Syria. "Most unique in this project is the Colloquial Arabic Version, with the colloquial is known as Mardini."

The term Syriac refers to one Aramaic dialect in which Christian literature was written. Evidence from the second century A.D. indicates Aramaic-speaking Christians undertook translating the Hebrew Bible and the Greek New Testament into Syriac, he said.

"The Syriac translation of the Greek New Testament restores many of Jesus' expressions in the language He spoke," Saadi said. "The Lord's Prayer, for instance, is as close as it possibly can be to the very words of Jesus Himself. It is natural to think that those early Aramaic-speaking Christians had memorized the Lord's Prayer in its original form and that the translators wrote their memorized Aramaic version as they were consulting the written version in Greek."

Translating, done with the help of his mother and brother, was "a learning process and struggle toward understanding both obvious and hidden meaning of the original text in forms of poetical devices or local idioms, then transferring these same meanings in clear expressions, carrying modern poetical devices and modern local idioms when it was feasible," Saadi said. "We invested considerable time to check the whole translation with Mardini speakers. After reading a passage to a group of them, we asked them to repeat or comment on that passage. Their response was valuable for checking the accuracy and naturalness of the translation."

His mission stemmed in part from his first name -- Abdul-Massih --translated as "the Servant of the Messiah," he said.

"For many in the Middle East, the name is not merely identification but rather identity and responsibility. Even in my childhood, when I used to do something wrong, people would reproach me saying, 'Either change your behavior or change your name.'"

Saadi joined a monastic order at age 12 and spent 20 years there. He holds degrees in civil engineering, business management, theology and Eastern Christianity, and New Testament Studies. He said that in 2002, God called him to marry and raise a family, and he has two sons. He taught at the University of Notre Dame before coming to Baylor.

"It would be very difficult to over-emphasize the scholarly and spiritual significance of this," said Heidi Bostic, Ph.D., chair of the department of modern and foreign languages in Baylor's College of Arts & Sciences. "Dr. Saadi's scholarly work, and indeed his own life story, highlight the significance of Arabic-speaking Christians around the world."

Saadi's painstaking and lengthy scholarly journey was a spiritual one as well, he said.

"What is more blessed than dealing with God's Word with family and friends in God's world?" he asked. "God was the first translator of His Word to the world in an easy, natural, accurate and communicative way."

The volume (United Bible Societies and Aramaic Bible Translation) is expected to be available later this month.