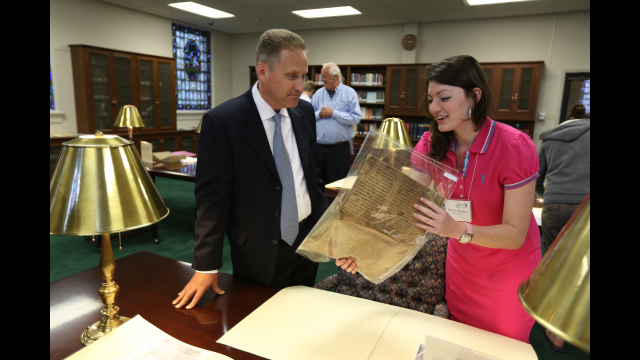 WACO, Texas (July 10, 2012) -- Paul DuPont -- newly armed with a master's of divinity degree and with experience as an associate pastor under his belt -- turned wrestler during a recent week's visit to Waco.

That's wrestling as in grappling with the languages of Hebrew and Greek in ancient documents. DuPont, who has won awards for his prowess in those languages, was one of 31 international students chosen to attend the first-ever λόγος (LOGOS) at Baylor University -- a summer institute for undergraduates and graduate students eager to pore over papyrus fragments and parchment manuscripts, contemplate universal questions such as God's existence, worship, pray and learn how to logically defend their Christian faith in a sometimes hostile secular world.

"I'm used to letters being typed all nicely by the computer," said DuPont, an aspiring doctoral student at the Charlotte, N.C., campus of Gordon-Conwell Theological Seminary. "It's not the language itself that's the issue; it's the way the letters look in ancient manuscripts. I didn't realize how challenging it would be because of fading and missing pieces on the manuscript."

But he plunged headlong into the task, joining other humanities students doing hands-on research with leading scholars-mentors in the fields of textual studies, biblical studies, classics, Christian philosophy and apologetics.

The institute is the vision of Christian businessman Steve Green, president of Hobby Lobby, the world's largest privately owned arts and crafts retailer, who has made available for study items from The Green Collection. In a scant two and a half years, he has amassed a priceless collection of more than 40,000 rare texts and artifacts, including clay tablets, scrolls, Scripture on papyrus and animal parchment, rare printed Bibles and manuscripts of Latin and Greek classics.

He envisions λόγοςas expanding over time into a humanities counterpart of the Alliance Defense Fund's Blackstone Legal Fellowship --a world-class summer program aimed at training Christian students at the nation's top law schools to use their convictions as they rise to positions of influence as legal scholars, litigators, policy makers and judges.

The institute is part of the Green Scholars Initiative, a program of the Institute for Studies of Religion at Baylor. Baylor is the primary research partner in the initiative, expected to eventually include more than 100 universities. Besides making materials available, Green provided scholarships and stipends for students so they could travel to Baylor from universities and seminaries in the United States, the United Kingdom and Canada.

"You'll hear a lot of academics here -- and then you'll hear me," a smiling Green told students and mentors at an evening session. "We're here because of our love of a book, and we want to share the story with the world."

Written over centuries by more than 40 different authors -- among them priests, philosophers, kings, shepherds, farmers, physicians and tent-makers --the Bible is "an extremely cohesive and unified book" that has survived ridicule and persecution of its adherents, he said.

The Green family acquired its first biblical artifact in 2009, intending to buy and donate such treasures. But "it opened a door," Green said. "There were people that wanted to turn their collections into cash; others just saw our vision . . . Our family feels like God has commissioned us to do this. We have the resources, and we're following God's lead."

The nature of many items is a mystery to be solved authoritatively by scholars, he said.

"God doesn't need me to help him out. All we need to do is take the evidence that's there, present it without embellishment to the world, and say, 'Make your choice.'"

At λόγος, dozens of sessions ranged from lectures on the esoteric - such as Germanic higher criticism and philosophical anthropology -- to roll-up-your-sleeves workshops, with academics doing double duty as experts and encouragers.

At one workshop, fragments of ancient texts written in Latin and on loan from The Green Collection were distributed among students, who donned plastic gloves before removing fragile materials from protective covers.

"Read in Latin, make a transcript in Latin, use a computer program for a line or two so see if you can locate it and find a description of what we have," said David Lyle Jeffrey, Ph.D., Distinguished Professor of Literature and the Humanities in Baylor's Honors College and Distinguished Senior Fellow and Director of Manuscript Research in Scripture and Tradition at Baylor's Institute for Studies of Religion.

"Estimate the century, what country it comes from . . . If people are moaning and groaning and get absolutely stuck, I'll help you, but I want you to rely on each other," Jeffrey said. "Some of these are easy; some aren't so easy, but I don't want anyone to get discouraged. I'll give you some things that have been identified, but there are some humdingers that haven't been.

They were. And students' excitement about lectures and workshops spilled over into their down time, as evidenced by two enthusiasts who discussed philosopher-theologian Augustine while downing peanut butter-banana-granola wraps.

"Having a community like this has been incredible," said Cambridge University sophomore Suzie Millar, a theology major. "Everybody is so friendly, and we're all on the same mission, striving together for the same goal."

"It's exciting to see the oldest versions of the Scriptures that we have, and to think of the light that can shed," Millar said. "We're all from different fields. Yes, my field -- Hebrew -- is important, but so are all these other things. The big picture is so much wider."

DuPont, meanwhile, said that "it was nice to have an 'Aha!' moment that led to me being able to read the Greek quickly the next day," he said. "It's great the way they (experts) are joining us at dinner and are very accessible and helpful by sharing their ideas."

Some manuscripts students and mentors tackled are significant because "they help to fill in the picture we have of the ancient world, including the world of the Bible, often confirming what we know of ancient society through the New Testament," said Jeff Fish, Ph.D., an associate professor of classics at Baylor.

"With documentary papyri in particular, we get a look at the daily life and language of ordinary people. In effect, through private letters and other documents, we can eavesdrop on the ancients," he said. "Just to give an example, we learn a lot about slavery that can help us understand something like Paul's letter to Philemon, which relates to a runaway slave. In addition, the documentary papyri give us an up-close look at the language people used in everyday speaking and writing, and that also helps us to better understand the New Testament.

"In your work on documentary papyri you won't always have that flash of, 'Wow, this is important,' but you can nevertheless work on the texts skillfully and faithfully," Fish told students. "Sometimes the importance of what we are doing with materials from The Green Collection is immediately apparent. In other cases we can't see how it fits into the larger picture, but perhaps someday someone will."

In addition to the documentary material, scholars are mentoring students in the process of editing some of the earliest fragments of the New Testament. "Some of them date to the second century, which puts them among the earliest we have. It's remarkable," Fish said.

Jeffrey said that among other discoveries are fragments of copies of some of St. Augustine's commentaries on John's gospel and the Psalms, as well as an assemblage of verses from Psalms 3 written in a 10th-century Carolingian handwriting but annotated by a later theologian "in a robust 14th-century hand."

At another lecture, Lori Baker, Ph.D., an associate professor of anthropology at Baylor, told students and mentors how radiocarbon dating and DNA analysis is being used to date and analyze parchments and papyri.

"Dating of the inks needs to be done to be sure the writing is as old as the parchment, too," Baker said. "In the seventh and ninth centuries, many were scrubbed and scoured so they could be used for new writing."

Greeks and Romans used papyrus for documents until about the fourth century, when parchment of sheepskin, calfskin or goatskin began to be used, she said.

"DNA from the parchment can tell us about the animals and, through them, the people who kept and bred these animals," she said.

But ancient DNA is degraded and fragmented, making it difficult to analyze, she said. And with carbon-14 dating -- while a sample merely the size of a grain of wheat is all that is needed -- "that can still be taking too much from some of these documents, when the writing is too precious to destroy."

Despite the problems, "technology is changing the game," she said.

Among the take-away messages for young Christian scholars was one from Darin Davis, Ph.D., assistant professor of philosophy and director of the Institute for Faith and Learning at Baylor.

"The purpose we're called for is to connect the dots between ourselves and others who are engaged in different fields and academic disciplines," he said. "Christians are not called to collaborate on interdisciplinary research because it is vogue, but because all truth is connected to God."

He urged students not to live in an ivory tower, but to use their knowledge to serve the church.

"The next generation of faithful scholars need to be seekers of wisdom who share it with God's people everywhere," he said. "It's not ours to stock up for ourselves."

DuPont, who will be working toward his doctorate, said he is still determining his focus, but "before this program, it was much more cloudy. I could barely narrow my interests. After speaking to professors and students, I have more clarity and direction of how I might serve the Church. Whatever my future, I recognize God is sovereign.

Baylor University is a private Christian university and a nationally ranked research institution, characterized as having "high research activity" by Carnegie Foundation for the Advancement of Teaching. The university provides a vibrant campus community for approximately 15,000 students by blending interdisciplinary research with an international reputation for educational excellence and a faculty commitment to teaching and scholarship. Chartered in 1845 by the Republic of Texas through efforts of Baptist pioneers, Baylor is the oldest continually operating university in Texas. Located in Waco, it welcomes students from all 50 states and more than 80 countries to study a broad range of degrees among its 11 nationally recognized academic divisions. Baylor sponsors 19 varsity athletic teams and is a founding member of the Big 12 Conference.