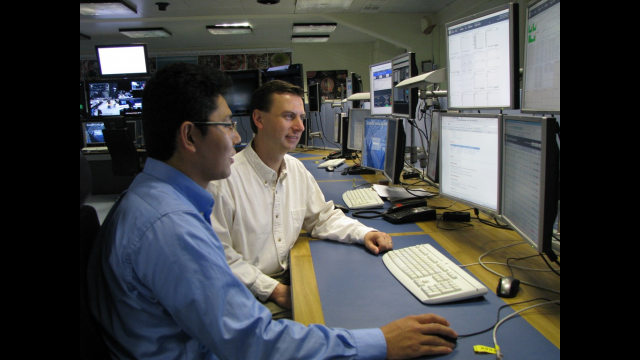 The results to be presented by Kasmi represent years of intense work by physicists to seek the Higgs boson in high-energy particle collisions. Theoretical physicists in the 1960's predicted the existence of the Higgs as a way to explain why elementary particles in the universe have mass, but the Higgs has eluded experimental observation for decades.

The Baylor High Energy Physics group, led by Jay R. Dittmann, Ph.D., and Kenichi Hatakeyama, Ph.D., has played a prominent role in the search for the Higgs, a long quest that has culminated this morning in an announcement of a new particle discovery at the European Center for Nuclear Research (CERN).

"We're thrilled to be a part of this extraordinary scientific endeavor," said Dittmann, associate professor of physics in the College of Arts and Sciences at Baylor. "Members of our Baylor team have been involved in the search for the Higgs boson at all levels, from analyzing data to presenting high-profile scientific seminars to composing publications for our scientific collaboration. Now, we can finally claim the observation of a new particle that could be the long-sought Higgs boson. It's tremendous. Determining whether this new particle really is the Higgs boson predicted by theory is the next step."

Although the CDF and DZero experiments at Fermilab were not able to collect quite enough data to officially claim "evidence" for the Higgs boson, the data have suggested tantalizing hints of its presence over time. Analysis techniques and methods developed at Fermilab have greatly influenced the search for the Higgs boson at CERN.

Baylor team members have impacted the Higgs search at CERN through their expertise with "jets," entities that indicate the presence of quarks and gluons in the experimental apparatus, and "missing energy" which is important for detecting certain heavy particles like W bosons. A thorough understanding of all of these particles was crucial for this discovery, according to Dittmann.

"This discovery is not the end of our research pursuit, but the beginning of a long journey. We will make a lot of measurements to study the properties of this new particle," said Hatakeyama, assistant professor of physics at Baylor. "We are also seeking another type of new particle that would explain all of the dark matter present in the universe."

Others from Baylor who were involved in the research include postdoctoral research associates Nils Krumnack and Hongxuan Liu, and graduate students Karen Bland, Martin Frank, Tara Scarborough, and Zhenbin Wu.

Bland, who recently defended her Ph.D. thesis on the search for the Higgs boson in May, said, "It is a very exciting time to be a graduate student in particle physics. Having contributed to this world-wide effort from thousands of physicists has been a rare privilege and a tremendous learning experience."

The College of Arts & Sciences is Baylor University's oldest and largest academic division, consisting of 27 academic departments and 13 academic centers and institutes. The more than 5,000 courses taught in the College span topics from art and theatre to religion, philosophy, sociology and the natural sciences. Faculty conduct research around the world, and research on the undergraduate and graduate level is prevalent throughout all disciplines. Visit www.baylor.edu/artsandsciences