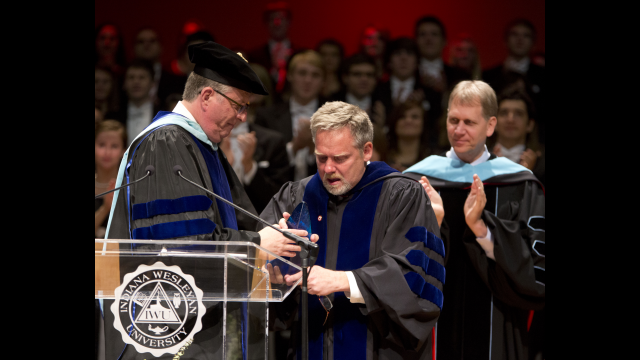 WACO, Texas (May 15, 2012) -- Jerry A. Pattengale, Ph.D., a Distinguished Senior Fellow in Baylor University's Institute for Studies of Religion, has been named the recipient of The IWU (Indiana Wesleyan University) World Changing Faculty Award.

Besides his position at Baylor, Pattengale is the assistant provost for scholarship and public engagement at Indiana Wesleyan, a research scholar with Gordon-Conwell Theological Seminary, a Senior Fellow with Sagamore Institute and executive director of National Conversations.

The award honors a faculty member of IWU whose career is making a significant national and/or global contribution to educational, scholarly or humanitarian issues -- in particular, someone whose accomplishments are recognized beyond Christian circles, said Dr. David Wright, provost and chief academic officer at IWU.

Pattengale, an expert on biblical manuscripts and an author, consultant and speaker on contemporary issues in higher education, is "a world changer . . . an energetic networker who has coordinated dozens of national and international programs, featuring hundreds of world-renowned scholars, commentators, clerics and politicians," Wright said.

"Dr. Pattengale has also devoted keen attention to the unique opportunities and challenges faced by Christ-centered academic communities and in the process earned national recognition for his contributions to Christian higher education and scholarship," Wright said.

AT IWU, his alma mater, Pattengale has been an administrator and faculty member since 1997, helping to develop the university into a leading center of student engagement and Christian scholarship.

Pattengale, who was presented with the award during the spring graduation ceremony at IWU on April 28, said afterward that he was "shocked with a very unexpected type of peer review. One never prepares for such a moment, and I took it like a man and cried before thousands. A real joy in such a moment is sharing it not only with peers that were present, but with special colleagues at Baylor. My hope is that in some small way this reflects well on Baylor Nation. It's also special that (Baylor President Ken Starr) Judge Starr had recently given a wonderful keynote on IWU's campus related to the award's essence."

Starr spoke on the topic of "The Christian Scholar as a Public Servant" during a recent Faith and Learning Luncheon at IWU.

Pattengale is a featured reviewer in Christianity Today's chief scholarly publication, Books & Culture. He serves as the associate publisher for the leading journal of Christian scholarship, the Christian Scholars' Review.

In the fall of 2010, Pattengale became the founding director of the Green Scholars Initiative, an international collaboration of scholarship that networks hundreds of world-class scholars and academic institutions around research projects associated with the Green Collection (the world's largest collection of ancient texts and artifacts related to the Judeo-Christian heritage). As director, Pattengale has coordinated exhibits, public lecture series and research partnerships across the nation and around the world, including high-profile programs in Oxford and Rome. These efforts have given Pattengale the chance to work alongside dozens of the world's leading experts on ancient manuscripts, biblical archaeology, and church history; and his work with the Green collection has been highlighted in global media outlets such as the The New York Times, USA Today, CNN, Fox News, National Catholic Register and the History Channel.

Most recently, Pattengale worked with the Pontifical Biblical Institute and the American Bible Society to coordinate and co-host an ecumenical lecture series on the history of the Bible and the Green Collection at the Vatican in Rome. Already, more than 30 universities -- among them Baylor -- are conducting groundbreaking scholarship on ancient manuscripts and papyri.

Baylor University is a private Christian university and a nationally ranked research institution, characterized as having "high research activity" by the Carnegie Foundation for the Advancement of Teaching. The university provides a vibrant campus community for approximately 15,000 students by blending interdisciplinary research with an international reputation for educational excellence and a faculty commitment to teaching and scholarship. Chartered in 1845 by the Republic of Texas through efforts of Baptist pioneers, Baylor is the oldest continually operating university in Texas. Located in Waco, it welcomes students from all 50 states and more than 80 countries to study a broad range of degrees among its 11 nationally recognized academic divisions.