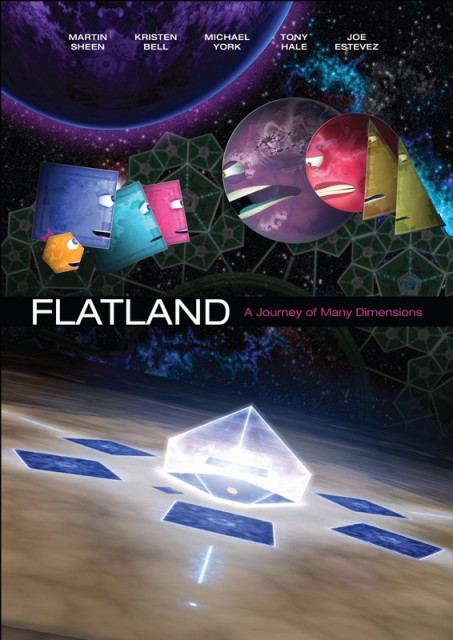 WACO, Texas (April 17, 2012) - Filmmakers Dano Johnson and Seth Caplan will present a screening of their film, "Flatland: The Movie," and discussion of their new film, "Sphereland," at 6 p.m. Wednesday, April 18, in Kayser Auditorium of the Hankamer School of Business on the Baylor University campus.

The event, hosted by the department of mathematics in the College of Arts and Sciences at Baylor, will be held in celebration of National Mathematics Awareness Month. It is free and open to the public.

Dr. Edward B. Burger, Robert Foster Cherry Professor for Great Teaching and visiting professor of mathematics at Baylor, will introduce Johnson and Caplan prior to the film screening of "Flatland."

The animated version of Edwin Abbott's 1984 classic, "Flatland: A Romance of Many Dimensions," stars Martin Sheen, Kristen Bell, Michael York, Tony Hale and Joe Estevez. Produced by Caplan, and co-directed and animated by Johnson, the story revolves around two-dimensional characters, Arthur Square and his curious granddaughter, Hex. They soon discover that there is much more to their planar life - namely three-dimensional Spaceland and beyond - and this discovery leads them into serious trouble with the evil rulers of their two-dimensional world.

After the screening, Johnson and Caplan will discuss and show clips from their upcoming film "Sphereland," the sequel to "Flatland," to be released in summer 2012. "Sphereland" is based on the 1965 book by Dutch author Dionys Burger and is a sequel to Abbott's "Flatland."

A Chicago native, Caplan is an award-winning filmmaker who has worked for production companies in New York, Los Angeles and Amsterdam. He holds degrees from the University of Texas at Austin and the American Film Institute. Johnson is the co-creator of a production company, Collection Agency Films, which develops animated content for a variety of clients. He earned a Telly advertising award for his web cartoon ads for gubernatorial candidate Kinky Friedman.