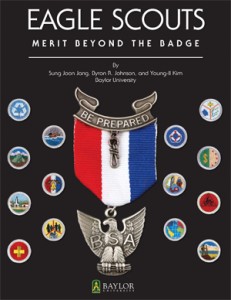 Waco,Texas (April 10, 2012)- One hundred years after Arthur Eldred of New York earned the first Eagle Scout Award from the Boy Scouts of America, researchers with Baylor University's Institute for Studies of Religion (ISR) and Program on Prosocial Behavior have released findings from a nationwide, scientific survey that demonstrates the significant, positive impact Eagle Scouts have on society - from holding leadership positions in their workplace and neighborhood to voting and volunteering to protecting the environment and being prepared for emergencies.

"There is no shortage of examples or anecdotal accounts that suggest Scouting produces better citizens, but now there is scientific evidence to confirm the prosocial benefits of Scouting or earning the rank of Eagle Scout," said the study's principal investigator, Byron R. Johnson, Ph.D., Distinguished Professor of the Social Sciences, director of the Program on Prosocial Behavior and ISR co-director. "The central question of this study was to determine if achieving the rank of Eagle Scout is associated with prosocial behavior and development of character that carries over into young adulthood and beyond."

With funding from a major two-year research grant from the John Templeton Foundation, Baylor researchers with ISR's Program on Prosocial Behavior partnered with the Gallup Organization to conduct a nationwide random survey of 2,512 adult males.

The full study - "Merit Beyond the Badge" - can be downloaded at www.baylorisr.org.

Sung Joon Jang, Ph.D., associate professor of sociology, Baylor ISR Faculty Fellow and co-principal investigator, said analyses were conducted to see whether three groups of survey respondents - Eagle Scouts, Scouts who did not achieve the Eagle Scout rank, and non-Scouts - differed in responses to a series of survey questions related to the following topics:

The Baylor study found that Eagle Scouts - compared to Scouts who never attained the rank of Eagle Scout and men who were never Scouts - were significantly more likely to:

• Exhibit higher levels of participation in a variety of health and recreational activities, such as regular exercise, outdoor recreation, attending plays and live theater, reading books, playing a musical instrument and visiting a local, state or national park (Figures 1-10, pp. 4-9),
• Show a greater connection to siblings, neighbors, religious community, friends, coworkers, formal and informal groups and a spiritual presence in nature (Figures 11-18, pp. 9-13),
• Share a greater belief in duty to God, service to others, service to the community and leadership, such as donating money within the last month to a religious or non-religious organization or charity, reporting volunteer time with a religious or non-religious organizations, working with neighbors to address a problem or improve something, voting in the last presidential election and holding leadership positions at a workplace or local community (Figures 19-26, pp. 13-17),
• Engage in behaviors that are designed to enhance and protect the environment, such as being active in a group that works to protect the environment, avoiding the use of certain products that harm the environment and using less water in their households (Figures 27-29, pp. 17-18),
• Be committed to setting and achieving personal, professional, spiritual and financial goals (Figures 30-35, pp. 18-21),
• Show higher levels of planning and preparedness, such as having a disaster supply kit in their home and emergency supplies in their car, designating a specific meeting place for family during an emergency and being CPR certified (Figures 36-39, pp. 22-23), and
• Indicate that they have built character traits related to work ethics, morality, tolerance and respect for diversity, such as always exceeding people's expectations and doing what is right, working hard to get ahead, treating people of other religions with respect, strongly agreeing that most religions make a positive contribution to society, stating that respecting religious leaders outside of their religions is somewhat important and showing respect to the American flag (Figures 40-46, pp. 24-27).

The Eagle Scout badge has become widely recognized as a mark of distinction both within and outside of Scouting. Once earned, it is worn for life. Since it was first awarded in 1912, more than 2 million young men - about 4 percent of Boy Scouts - have achieved the Boy Scouts of America's highest rank.

To do so, Scouts must demonstrate their understanding of leadership, service, character, personal fitness and outdoor skills at multiple levels. In addition to the 21 life skills merit badges required to earn the Eagle Scout rank, each Scout must complete an extensive self-directed service project. The Scout must plan, organize, lead and manage the entire service effort prior to his 18th birthday. The average number of hours spent on Eagle Scout projects is 130. In 2011, more than 51,000 young men earned the Eagle Scout Award, which means Eagle Scout service projects alone represented almost 6.7 million hours of community service.

Throughout the past century, Eagle Scouts have gone on to become Olympians, surgeons, civil rights leaders, Pulitzer Prize winners, and paragons of business. Some notable Eagle Scouts include:

"Eagle Scouts have made their marks throughout history--from walking on the moon and working behind the desk in the Oval Office to running the bases in the major leagues. And while we're proud to claim some truly great men in American history among our ranks, we're even more proud that everyday Eagle Scouts become wonderful husbands, fathers, and citizens," said Bob Mazzuca, Chief Scout Executive of the Boy Scouts of America. "This research validates for the world something we've known about Eagle Scouts for years. They lead. They vote. They donate. They volunteer. They work hard and achieve their goals. In short, Eagle Scouts are exceptional men."

Launched in August 2004, the Baylor Institute for Studies of Religion (ISR) exists to initiate, support and conduct research on religion, involving scholars and projects spanning the intellectual spectrum: history, psychology, sociology, economics, anthropology, political science, epidemiology, theology and religious studies. The institute's mandate extends to all religions, everywhere, and throughout history, and embraces the study of religious effects on such things as prosocial behavior, family life, population health, economic development and social conflict. While always striving for appropriate scientific objectivity, ISR scholars treat religion with the respect that sacred matters require and deserve. The Program on Prosocial Behavior emphasizes the "neglected half" of human behavior: why so many people generously give money to help those in need to understanding the factors that help people reared in 'bad' neighborhoods turn out not only to be law-abiding, but to be good citizens. For more information, visit www.baylorisr.org.

About Boy Scouts of America

The Boy Scouts of America provides the nation's foremost youth program of character development and values-based leadership training, which helps young people be "prepared for life." The Scouting organization is composed of 2.7 million youth members between the ages of 7 and 21 and more than a million volunteers in local councils throughout the United States and its territories. For more information on the Boy Scouts of America, please visit www.scouting.org.