Where You Vote May Influence How You Vote, Baylor University Researchers Find 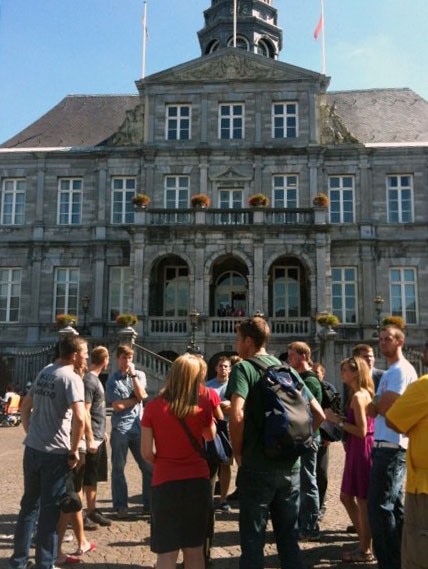 The type of building used for polling sites  such as churches, where many people vote  may have a bearing on election outcomes, according to Baylor University research conducted during a study-abroad tour by Baylor psychologists and psychology students. Students are pictured outside the town hall in Maastricht in the Netherlands, where they conducted surveys.

Passersby who stopped to answer surveys taken next to churches in the Netherlands and England reported themselves as more politically conservative and more negative toward non-Christians than did people questioned within sight of government buildings -- a finding that may be significant when it comes to voting, according to a Baylor University study.

The study, published online in the International Journal for the Psychology of Religion, adds to a growing body of evidence that religious "priming" can influence both religious and nonreligious people, Baylor researchers said. Priming occurs when a stimulus such as a verbal or a visual cue -- for example, the buildings that were in participants' line of vision during questioning -- influences a response.

The findings are significant in that churches and other buildings affiliated with a religious group are among the most common polling places, said psychologist Jordan LaBouff, Ph.D., lead author for the Baylor study.

"The important finding here is that people near a religious building reported slightly but significantly more conservative social and political attitudes than similar people near a government building," said co-author Wade Rowatt, Ph.D., associate professor of psychology and neuroscience at Baylor. "In a close election, the place where people vote -- a school, a church, a government building -- could affect the outcome . For example, a higher percentage of people voting in a church instead of a school might vote for a conservative candidate or proposition."

He noted that a Stanford University study of an Arizona school funding referendum in 2000 showed that voters polled in schools were more likely to support a state tax increase than were those polled in churches or community centers. That study was published in 2008 in the Proceedings of the National Academy of Science.

The Baylor study "raises questions about how our spaces can influence our attitudes," said LaBouff, a psychology lecturer at the University of Maine who collaborated on the research while a doctoral candidate at Baylor. "We should look carefully at places where important decisions are made."

He said that while those conducting the survey made certain that the church or government building was within sight of the participant, they did not question people who were entering or leaving the buildings.

"We didn't want people who were there for the express purpose of going into a church, because that might mean they were inherently more religious," LaBouff said.

Regardless of the setting, negativity toward Christians was not statistically significant.

"Interestingly, these more negative attitudes toward non-Christians were held by a very diverse -- and largely non-Christian -- sample," LaBouff said. "The only people not viewed negatively were Christians. They were a non-factor."

Passersby were asked to rate "outgroups" -- those who were different from themselves in terms of culture and/or religion. Groups listed included rich, poor, Christian, Jewish, Muslim, gay men, lesbian women, Africans, Asians, Europeans and Arabs. Participants were asked to rate their feelings of "coolness" or "warmness" toward certain groups on a scale of 1 to 10, with 10 being the warmest.

Survey participants were diverse and multicultural -- 99 individuals from more than 30 countries. They were questioned by Baylor students during a study-abroad tour, and Baylor psychologists in the College of Arts & Sciences analyzed the data collected by the students in an advanced research methods class.

Other study co-authors were Megan K. Johnson, a doctoral candidate at Baylor; and Callie Finkle, now a graduate student in global health at George Washington University.

Baylor University is a private Christian university and a nationally ranked research institution, classified as such with "high research activity" by the Carnegie Foundation for the Advancement of Teaching. The university provides a vibrant campus community for approximately 15,000 students by blending interdisciplinary research with an international reputation for educational excellence and a faculty commitment to teaching and scholarship. Chartered in 1845 by the Republic of Texas through the efforts of Baptist pioneers, Baylor is the oldest continually operating university in Texas. Located in Waco, Baylor welcomes students from all 50 states and more than 80 countries to study a range of degrees among its 11 nationally recognized academic divisions.