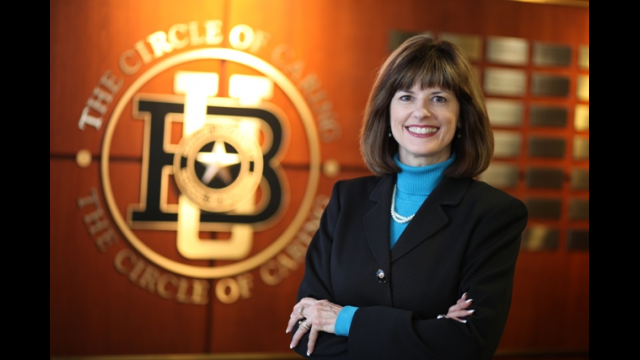 "I am confident that Dr. Conroy's extensive experience as a dean will equip her to skillfully guide our School of Nursing during these important times of progress and transition in the area of health care education," said Elizabeth Davis, Ph.D., executive vice president and provost at Baylor. "She is a proven leader, and she is enthusiastic about advancing Baylor University's unique mission to educate men and women for worldwide leadership and service by integrating academic excellence and Christian commitment within a caring community. We very much look forward to her arrival in January."

Conroy fills the position left vacant when Dr. Judy Wright Lott, who served as dean of the school since 2002, decided to return to full-time teaching and research. Dr. Martha M. Bradshaw, professor of nursing, served as interim dean during the search.

Conroy has more than 25 years of experience in higher education, health care administration, and nursing and health care research. She joins Baylor from Armstrong Atlantic State University in Savannah, Ga., where she was dean, professor, and a member of the graduate faculty of the College of Health Professions. Prior to that, she was dean of the Dr. Ezekiel R. Dumke College of Health Professions at Weber State University in Ogden, Utah, and dean for professional and technical studies at John Tyler Community College in Chester, Va. Before that, she spent 14 years in Florida, where she held positions in hospital administration and was a faculty member at the University of Central Florida and Valencia Community College.

"I am honored and humbled to have been selected to join my colleagues as Dean at the LHSON at Baylor University. More than 100 years of academic excellence have laid a strong cornerstone for the future growth of the school and its continued mission to lead, learn and serve in the field of nursing," Conroy said. "It is my belief that the Lord used the entire story of my life, with all of its experiences, to prepare me for this position. It was a perfectly woven tapestry that prepared me for and led me to the capstone of my career here at Baylor. I pray daily that I will be found worthy of this calling."

She has a significant background in research, grants and sponsored projects. Some of these specialty areas include simulation training; critical incident stress; rural health outreach; nursing and health professions workforce preparation; curriculum development; and nursing externship. Her interests also include the impact of service and cultural immersion of student experiences in nursing education, psychological support for caregivers experiencing traumatic stress and moral distress, nursing practice competence and nursing policy issues. During her career, Conroy has been awarded more $6 million in grants and sponsored projects.

Conroy has made presentations before professional groups on topics such as geriatric care, nursing education in the United States, critical incident stress in the maternal-infant workplace and Chinese medicine and health care.

Throughout her career, Conroy has been active in various professional organizations. She has been a professional reviewer for the Journal of Allied Health since 2010; is a member of the Georgia Nursing Leadership Coalition; designated as a U.S. Health Resources and Services Administration (HRSA) grant reviewer; and a member of the Association of Schools of Allied Health Professions. In 2004, she was appointed to the Utah Governor's Task Force on Child Abuse Prevention. She also served as a member of a grant review and awards committee for the Virginia Department of Aging Services.

Conroy was a gubernatorial appointment to the Virginia Board of Nursing for eight years and served as president as well as chair of the Committee of the Joint Boards of Nursing and Medicine. This led to service with the National Council of State Boards of Nursing, where she was appointed to the Committee on Practice, Regulation and Education. During that time, she chaired the group that prepared the model standards for regulating nursing education.

Conroy holds a Doctor of Education degree in curriculum and instruction from the University of Central Florida with a specialization in nursing education and a cognate in health policy; a Master of Science degree in maternal-infant nursing from Virginia Commonwealth University's Medical College of Virginia; and a B.S.N. degree from Virginia Commonwealth University. She began her higher education studies at the University of Richmond.

Baylor University is a private Christian university and a nationally ranked research institution, classified as such with "high research activity" by the Carnegie Foundation for the Advancement of Teaching. The university provides a vibrant campus community for approximately 15,000 students by blending interdisciplinary research with an international reputation for educational excellence and a faculty commitment to teaching and scholarship. Chartered in 1845 by the Republic of Texas through the efforts of Baptist pioneers, Baylor is the oldest continually operating university in Texas. Located in Waco, Baylor welcomes students from all 50 states and more than 80 countries to study a broad range of degrees among its 11 nationally recognized academic divisions.

About Louise Herrington School of Nursing

The Baylor School of Nursing was established in 1909 as a diploma program within Baylor Hospital in Dallas, which is now Baylor University Medical Center, and in 1950 became one of the six degree-granting schools of Baylor University. The first bachelor of science in nursing degrees were awarded in 1954, establishing the school as one of the oldest baccalaureate nursing programs in the United States.

In 1999, the School was renamed the Louise Herrington School of Nursing after Louise Herrington Ornelas, a 1992 Baylor Alumna Honoris Causa, made a $13 million endowment gift to the school. The School of Nursing offers a bachelor of science in nursing degree and a master of science in nursing degrees in advanced neonatal nursing, nursing administration and management, and family nurse practitioner programs, which are accredited by the Commission on Collegiate Nursing Education. The School also offers a nurse midwifery doctorate in nursing practice.