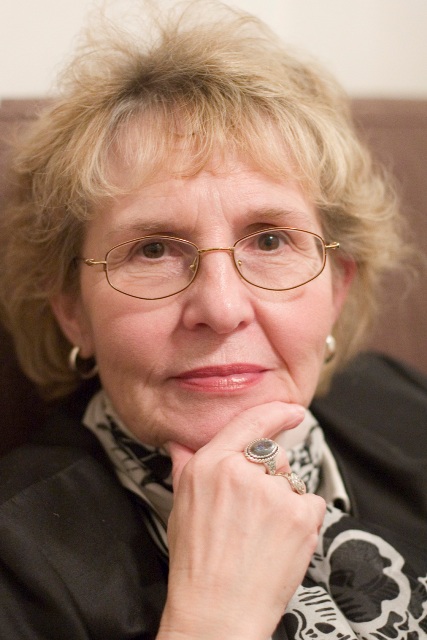 Dr. Jean Bethke Elshtain, one of America's foremost public intellectuals and recent recipient of the prestigious Democracy Service Medal from the National Endowment for Democracy, has joined the Baylor University faculty as Visiting Distinguished Professor of Religion and Public Life at Baylor's Institute for Studies of Religion (ISR).

Elshtain will present Oct. 19 lecture at Baylor on "The Ups and Downs of a Christian Philosopher"

Dr. Jean Bethke Elshtain, one of America's foremost public intellectuals and recent recipient of the prestigious Democracy Service Medal from the National Endowment for Democracy, has joined the Baylor University faculty as Visiting Distinguished Professor of Religion and Public Life at Baylor's Institute for Studies of Religion (ISR).

Elshtain also serves as The Laura Spelman Rockefeller Professor of Social and Political Ethics at the Divinity School at The University of Chicago. At Baylor and with ISR, Elshtain will conduct and produce new scholarship at the intersection of religion and public life, working alongside faculty as well as undergraduate and graduate students from political science, philosophy and the Honors College.

"Professor Elshtain has achieved a sterling reputation as a public intellectual in the national and international academy as a result of probing deeply into issues that are of fundamental concern to Christians in society today. We're delighted that she will be joining us at Baylor as we continue to explore new opportunities for engaging in crucial cultural conversations at the highest level," said Elizabeth Davis, Ph.D., Baylor executive vice president and provost. "Baylor's international reputation as a research university with a distinctively Christian identity makes Baylor a uniquely attractive university for Christian scholars like Jean, and we are thrilled to welcome her as our newest faculty member."

In her first public event as a member of the Baylor faculty, Elshtain will give a lecture on "The Ups and Downs of a Christian Philosopher" at 3 p.m. Wednesday, Oct. 19, in Kayser Auditorium at Baylor's Hankamer School of Business. The lecture is free and open to the public. This will be the first in a series of university-wide lectures Elshtain has agreed to offer at Baylor each year during the fall semester.

"Jean Bethke Elshtain is a world-renowned scholar and has long been a leader in multiple disciplines within the academy. It is a major coup for Baylor University to attract a scholar of her stature," said Byron Johnson, Ph.D., Distinguished Professor of the Social Sciences and ISR director.

On Oct. 13, Elshtain was honored with the prestigious Democracy Service Medal from the National Endowment for Democracy, which recognizes individuals who have made significant contributions to the progress of democracy around the world. Writing and lecturing extensively on religion and democracy, Elshtain served on the NED's Board of Directors for nine years, where she was the Board Specialist for South Asia. The inaugural award was presented in 1999 to former Polish President Lech Walesa, founder of the Solidarity trade union movement, and former AFL-CIO President Lane Kirkland on the 10th anniversary of the roundtable agreement that led to the peaceful transition to democracy in Poland. It has since been presented to a wide range of individuals, now including Elshtain, who have demonstrated through personal commitment their dedication to the advancement of freedom and human rights and to the building of democratic institutions.

Elshtain's books include Public Man, Private Woman: Women in Social and Political Thought; Meditations on Modern Political Thought; Women and War; Democracy on Trial (a New York Times "Notable Book" for 1995); Real Politics: At the Center of Everyday Life; Augustine and the Limits of Politics; Who are We? Critical Reflections, Hopeful Possibilities (recipient of the Theologos Award for Best Academic Book 2000 by the Association of Theological Booksellers); Jane Addams and the Dream of American Democracy (honored by the Society of Midland Authors in 2002); Just War Against Terror: The Burden of American Power in a Violent World (named one of the best non-fiction books of 2003 by Publishers Weekly); and Sovereignty: God, State, and Self (her Gifford Lectures, published 2008). In addition, Elshtain has edited numerous books. She writes frequently for journals of civic opinion and lectures widely in the United States and abroad on themes of democracy, ethical dilemmas, religion and politics and international relations. She is a fellow of the American Academy of Arts and Sciences and has been a Guggenheim Fellow, a Fellow at the Bellagio Center of the Rockefeller Foundation, the holder of the Maguire Chair in Ethics at the Library of Congress, a Fellow at the Institute for Advanced Studies, Princeton and a member of its Board of Trustees; and a Phi Beta Kappa Lecturer.

In 2002 she received the Goodnow Award, the highest award bestowed by the American Political Science Association for distinguished service to the profession. She has served on the Board of the National Humanities Center and on the President's Council of Bioethics. Currently she is a member of the Council of the National Endowment for the Humanities and the Scholars Council of the Library of Congress. In 2006, she delivered the prestigious Gifford Lectures at the University of Edinburgh, joining such previous Gifford Lecturers as William James, Hannah Arendt, Karl Barth and Reinhold Niebuhr.

"We in the political science department couldn't be more pleased that a scholar of the eminence of Jean Elshtain is to be a Baylor faculty colleague," said David Clinton, Ph.D., professor and chair of the department of political science, Baylor's College of Arts and Sciences. "She is a renowned authority on the relation between politics and ethics, and a number of us have long relied on her written work for insight and inspiration.

"Now that she is to be on campus, our students will benefit from her guidance, and she has already agreed to hold a series of intensive sessions with them in the spring. Baylor's success in attracting an academician of her stature demonstrates its progress in becoming a recognized center for scholarship informed by faith and marked by the highest intellectual standards."

The College of Arts & Sciences is Baylor University's oldest and largest academic division, consisting of 27 academic departments and 13 academic centers and institutes. The more than 5,000 courses taught in the College span topics from art and theatre to religion, philosophy, sociology and the natural sciences. Arts & Sciences faculty conduct important research around the world, and research on the undergraduate and graduate level is prevalent throughout all disciplines. Visit www.baylor.edu/artsandsciences