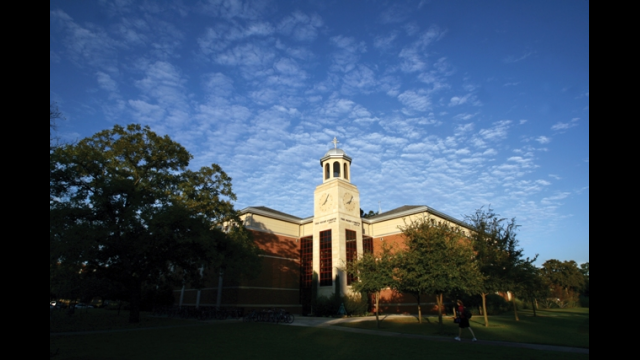 WACO, Texas -- Baylor University has become the first university in Texas to earn a coveted environmental rating by meeting stringent standards set out by an international building council.

Baylor's George W. Truett Theological Seminary has been awarded a Leadership in Energy and Environmental Design certification by the U.S. Green Building Council in its existing buildings rating system.

"Baylor is committed to sustainable construction and being a leader locally and nationally in earning LEED certification for existing buildings and new construction," Dr. Reagan Ramsower, vice president for finance and administration, said. "I am delighted that Baylor has the first fully certified LEED designation in Waco and McLennan County."

The 66,000-square-foot structure was just two points away from snaring a "silver" rating, a step above certification, said Don Bagby, Baylor's director of facilities management. Buildings may earn additional points to achieve silver, gold or platinum status, he said.

"This is great," Bagby said. "To be so close to silver at our first shot was exciting, and also to be the first university to get the certification in the existing building category."

Truett is the sixth Texas building to get the LEED certification for existing buildings. Internationally, 235 buildings have earned the rating, said Ashley Katz, communications manager for the Washington-based council, a nonprofit organization.

In a separate category for new construction, 1,749 buildings internationally have earned certification, she said.

But a LEED certification is more difficult for an existing building to earn than for a new structure to do so, said Bill France, operational excellence manager for ARAMARK Higher Education, who worked with Baylor on the project. ARAMARK, a Fortune 500 company, addresses issues of environmental stewardship and employee advocacy.

The seminary was completed in 2002, Bagby said.

"The great thing about this was validating that good practices are already at Baylor," said Steve Guenther, associate vice president for operational excellence with ARAMARK Higher Education.

"When you're talking about a building that's going to be around 50 or more years, we want to encourage people not just to build green but to keep it green," he said. "There's going to be ongoing positive environmental impact, benefits for building occupants and operating cost savings at the seminary -- a significant return on the investment."

Baylor tackled its task at Truett in early spring of 2008, Bagby said.

"This means using energy and water efficiently, having a recycling program, paying attention to cleaning procedures and chemicals, changing or tightening the schedules of the heating and air conditioning systems," he said.

Transportation figured into the equation, too, he said.

"A building should be accessible as far as using walkways, having bicycle racks and being accessible to mass transit," Bagby said. "We want to use energy wisely not only in the building, but in getting to and from the building."

More than 20 staff and faculty members spent hundreds of hours measuring, documenting and changing procedures, he said. He also led a team of three off-site ARAMARK employees and nine Baylor managers who oversaw grounds, energy, finances and customer service aspects of the project.

"Meters were installed, and inspections were made," Pollard said. "We weighed how much material was being recycled, how much water we used on the plants. We looked at places where we could use outdoor lighting instead of inside.

"There were just a multitude of things," he said. "There was some overtime, because we had to do some studies at night."

Housekeeping staff saw to it that green products were used and trash recycled, Pollard said. Truett personnel also monitored the number of people in classes and hours people were in the building.

Besides the environmental and money-saving benefits of earning certification, the achievement affects employee well-being, Guenther said.

For example, "several studies have shown that people have more positive feelings about work if they have natural light and the ability to see outside," he said.

The Leadership in Energy and Environmental Design was developed in the late 1990s as a way to rate new construction, Guenther said.

"Everyone was claiming their buildings were green, but there were no standards, and there was a lot of skepticism," he said. "This became pretty much the worldwide standard.

"The standards encouraged builders to work on things that were proven," Guenther said. "Architects and contractors have a certain way of doing things, and human nature is to keep doing it that way. People may not change what they're doing without encouragement, even if it makes sense."

"This was a stretch on our people, but it was worth all the hard work," Pollard said.

"Next year, we want to go even further and get a silver for Truett."