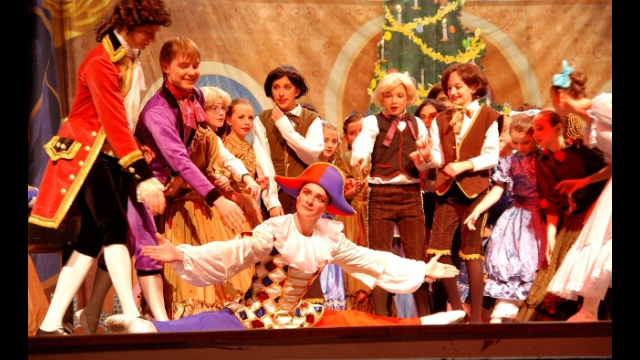 The Baylor University and Waco communities will be sure to get into the holiday spirit as the Waco Symphony Orchestra presents the St. Petersburg Classic Ballet Theater of Marina Medvetskaya in a performance of the classic tale The Nutcracker at 2:30 p.m. Sunday, Dec. 7, in Waco Hall on the Baylor campus.

Though the performance is different than the original story, "The Nutcracker and the King of Mice" by E.T.A. Hoffman, the plot remains the same - a story of a young girl who dreams of adventures and a Nutcracker Prince facing a battle against a Mouse King with seven heads.

The ballet, written by Peter Tchaikovsky, will feature 16 soloists from the St. Petersburg Classic Ballet, eight dancers from the company's U.S. tour producer, the Willis Conservatory of Classical Ballet of Panama City, Fla., the Waco Symphony Orchestra and children from Waco.

Askins said that Aarino asked her to design the production in the spring of 2005. Askins communicated with the costume builders electronically, with Dr. Michael Long, director of Slavic Studies at Baylor, providing assistance if a language barrier occurred. Askins' costumes were created in the shop that also builds costumes for the renowned Kirov Ballet, originally known as the Imperial Russian Ballet.

While the production of The Nutcracker has toured Russia and the United States, Askins explained that she has not been able to see the costumes except through Internet capabilities and digital photos.

"I'm particularly excited to see the Rat King live. He is one of my favorite characters and the Russian costume shop did a lovely job of realizing the costume," Askins said.

Askins has taught at Northern Arizona University, Texas Tech University and Trinity University's graduate school at the Dallas Theater Center. Since coming to Baylor Theatre, her professional designs include The St. Petersburg Ballet of Russia, the Dallas Children's Theater, Salado Legends, The Oklahoma Shakespeare Festival, and most recently State University of New York at Oneonta.

"There is always a wonderful feeling to get to participate in projects that are not only an interesting design challenge, but culturally a tradition," Askins said. "To be able to costume artists who are some of the best ballet dancers in the world is especially exciting."

The St. Petersburg Classic Ballet, under the artistic direction of prima ballerina Marina Medvetskaya, is one of St. Petersburg's most well-respected ballet companies. The company was founded in 1996 and has performed throughout Russia, the states of the former Soviet Union, England, Scandinavia and more than 100 cities in the United States and Canada. The group premiered its full-length production of The Nutcracker in December 2005.

Medvetskaya is a disciple of premier danseur and choreographer Vakhtang Chabukiani. She is the former prima ballerina of the Tbilisi State Academic Opera and Ballet Theatre, where she danced all the leading roles in the classical and contemporary ballet repertoire.

The artists in Medvetskaya's company, many of whom have been trained in the classical technique of the Kirov Ballet's Vaganova Ballet Academy, have previously danced with the finest ballet companies of St. Petersburg, including the Kirov, The Maly and the St. Petersburg Ballet Theatre of the late Askold Makarov.

"I am very pleased that the Waco Symphony is bringing the production here," Askins said. "The Symphony is to be commended not only for the excellence of their own artists, but the fact that they continue to bring not only nationally but internationally known musicians and performers to Waco."

For ticket information on Waco Symphony Orchestra performances, visit www.wacosymphony.com or call (254) 754-0851. Tickets for The Nutcracker performance are sold out.