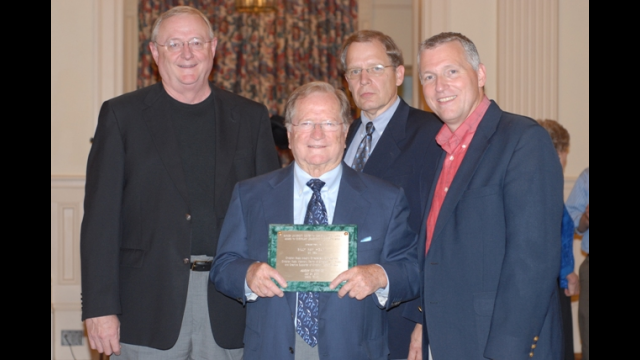 (L to R) - Dr. Will May, dean of the Baylor School of Music; Billy Ray Hearn, recipient of the 2008 Award for Exemplary Leadership in Church Music; Dr. Terry York, associate professor of Christian ministry and church music at Baylor; and Dr. Randall Bradley, The Ben H. Williams Professor of Music, professor of church music and director of Baylor's Center for Christian Music Studies.
Tweet
Aug. 1, 2008

Billy Ray Hearn, a 1954 Baylor University church music graduate renowned as the "father" of contemporary Christian music, was honored with the 2008 Award for Exemplary Leadership in Church Music, given by Baylor's Center for Christian Music Studies during the Alleluia! Church Music Conference July 22-25 at Baylor.

The award recognizes a Baylor graduate who has contributed uniquely and significantly to some aspect of the broad scope of church music ministry. The award can be given for cumulative lifetime achievement or a singular contribution.

"Billy Ray Hearn has influenced the direction of church music in many ways. He contributed to the first youth musicals, signed many of the first and biggest artists in the contemporary Christian music genre and produced groundbreaking recordings," said Dr. Randall Bradley, The Ben H. Williams Professor of Music and professor of church music, who also directs Baylor's church music program and Center for Christian Music Studies. "Billy Ray's influence on the role of music in the church, the music industry and the music heard on Christian music radio is significant. He has been faithful in giving back to Baylor, and he has influenced the next generation of young people."

Hearn received the award during the conference's annual banquet on July 24 in Barfield Drawing Room of Baylor's Bill Daniel Student Center. A permanent plaque will be on display in the School of Music, so future church music students at Baylor will "know who walked these halls before them," said Dr. Terry W. York, associate professor of Christian ministry and church music at Baylor and George W. Truett Theological Seminary.

The founder of EMI Christian Music Group, Hearn has spent the past 50 years leading the way as a Christian music industry entrepreneur, contemporary Christian music visionary and a creative supporter of Christian music education. With a life committed to risking everything for the sake of the Gospel, he has built a far-reaching legacy of its message and music, a legacy that will continue to unfurl for generations to come.

With lifelong decisions made from the need to bring together faith, music and cultural relevance, Hearn's life is full of firsts: he was the first to graduate from Baylor with a degree in church music, and his involvement with the wildly successful and innovative youth musicals, "Good News" and "Tell It Like It Is," sparked the idea that contemporary music had a place in the church. In 1972, Hearn started Myrrh Records -- one of the first labels devoted to contemporary Christian music -- at Word Inc. in Waco, Texas.

Hearn had great faith in the music and vision of the Jesus Movement of the 1970s. In 1976, he formed his own label, Sparrow Records in Canoga Park, Calif., with a small roster of artists. Those artists - 2nd Chapter of Acts, Barry McGuire, Keith Green and John Michael Talbot - and their music inspired a genre, and they were followed in the 1980's by Margaret Becker, Steve Taylor and Steve Green.

In addition to finding and signing great artists, Hearn has a love for producing. Among his best is his Dove Award-winning recording of Handel's Messiah with the London Philharmonic Orchestra and Choir. He also produced the highly-acclaimed hymns albums "Hymns Triumphant" and its sequel "Hymns Triumphant, Volume II" and executive produced the two-million selling and Grammy Award-winning "I Love To Tell The Story" by Andy Griffith.

In 1992, Hearn sold Sparrow to EMI Music, and the label continued to thrive, with the growth and success of such landmark artists as Steven Curtis Chapman and BeBe and CeCe Winans.

Though he semi-retired in 1996, Hearn has continued to play a pivotal role in the industry he helped create. Recognized as one of the foremost visionaries and innovators of Christian music, Hearn is a member of the Gospel Music Hall of Fame and in 1999 received the Lifetime Achievement Award from the Gospel Music Association. He continues to produce recordings of orchestral and choral works of the church and is active in many charitable endeavors, including work with the Nashville Symphony, at Baylor where served on the university's Board of Regents for nine years and was honored by the Baylor Alumni Association as a distinguished alumnus in 1995, the American Cancer Society, Nurses for Newborns, Easter Seals and his own Sparrow Foundation.

York said the Award for Exemplary Leadership in Christian Music was created to help Baylor's church music students understand the story of the ministry for which they are preparing and have a reverence for the heritage that they are about to inherit.

For more information about the award, contact Bradley at Baylor's Center for Christian Music Studies at (254) 710-6522.