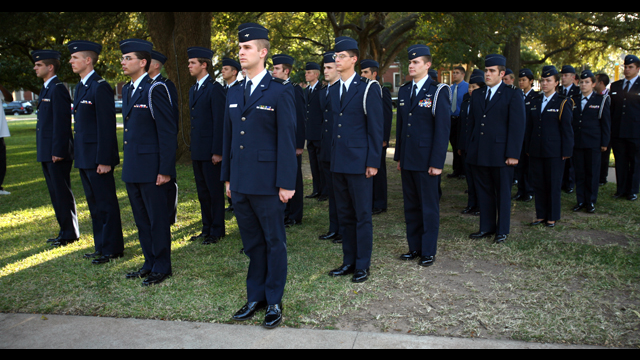 Already recognized as one of the nation's oldest Air Force ROTC units, Baylor University's Air Force Reserve Officer Training Corps (ROTC) Detachment 810 is marking another milestone July 31. The unit is celebrating its 60th anniversary on the Baylor campus, commissioning 1,301 second lieutenants though the program during that time.

"The Waco community and Baylor has supported us and enhanced our success in so many ways," said Col. Danny L. Leonard, commander of Baylor's AFROTC and chair of the department of aerospace studies. "These cadets do not belong to Detachment 810 alone, they are the community's cadets. We are truly blessed and honored to be a part of the Baylor family."

Detachment 810 was formed in 1948, only 10 months after the creation of the Air Force as a separate military branch, making it one of the first ROTC programs in the nation. This year, the detachment is enjoying increased success after being named the No. 1 large detachment in the Southwest Region, among detachments with more than 100 cadets. Detachment 810 beat out 34 other detachments for the top spot in the Southwest Region. It is the second time in the last five years Baylor's AFROTC has received the recognition.

A panel of judges looked at seven different criteria during the competition, including production, education, recruiting and retention, university and public relations, cadet activities, Arnold Air Society activities and other notable achievements.

"Generally speaking, we did well in all categories and we had two very good years with a number of contributing factors," Col. Leonard said. "For example, the new AFROTC Living and Learning Center went from idea conception to creation to 37 cadets enrolled with a waiting list in a two very short months. That's impressive."

Detachment 810 will now go on to compete with the other three regions for the right to be called the top large AFROTC detachment in the nation. There are 144 detachments nationwide.