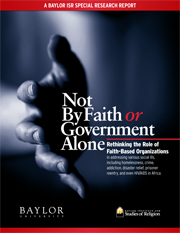 The Institute for Studies of Religion at Baylor University released an ISR Special Report, "Not By Faith or Government Alone: Rethinking the Role of Faith-Based Organizations," at the White House Faith-Based and Community Initiatives National Conference on Research, Evaluation and Outcomes held June 26-27 in Washington, D.C.

The conference, which focused on "Innovations in Effective Compassion," included several presentations by Dr. Byron Johnson, co-director of the Baylor Institute for Studies of Religion. Johnson delivered a talk on the impact of faith-based programs on recidivism reduction and prisoner re-entry and also participated in a plenary session on the state of research evaluating the effectiveness of faith-based initiatives.

Before the conference, Johnson invited top scholars from around the country to submit essays on the effect of the faith-based community initiative nearly eight years after the initial launch of the program in 2001. In the ISR report "Not By Faith or Government Alone," those scholars weigh in on the significant impact of faith-based and community initiatives in addressing social problems, such as drug addiction, mental health care, prisoner reentry, HIV/AIDS, crime and delinquency, and more.

"I really appreciate the efforts of Byron Johnson and Rodney Stark [University Professor of the Social Sciences at Baylor and co-director of ISR] in making the Baylor Institute for Studies of Religion the most interesting sphere for thought on these topics in the country," said Karl Zinsmeister, director of the President's Domestic Policy Council. Zinsmeister moderated the plenary session with Johnson, Rockefeller Institute of Government Co-Director Richard Nathan, and Brookings Institution Senior Fellow Bill Galston.

"Good research is now beginning to confirm what is already obvious to many - America's armies of compassion, largely motivated out of their faith to serve the least among us, are beginning to have a demonstrable impact on some of society's most pressing and difficult to address problems," Johnson said.

The goal of President Bush's faith-based and community initiative (FBCI) is to eliminate government barriers inhibiting partnerships with faith-based and grassroots charities and to strengthen the work of America's armies of compassion in addressing difficult social problems.

The debate over the role of faith-based initiatives has been often a contentious one during the Bush presidency. Yet, for all the criticism and debate it has received, the FBCI has garnered significant bi-partisan support, particularly outside of Washington. A dramatic increase in the extent and prevalence of public-private, sacred-secular partnerships have emerged in communities across the country, Johnson said.

To obtain a PDF copy of "Not By Faith or Government Alone," please visit the Institute's website: www.isreligion.org. To reach Johnson, call (254) 710-2841.

The Institute for Studies of Religion at Baylor exists to initiate, support and conduct research on religion, involving scholars and projects spanning the intellectual spectrum: history, psychology, sociology, economics, anthropology, political science, theology and religious studies. ISR's mandate extends to all religions, everywhere, and throughout history. It also embraces the study of religious effects on such things as prosocial behavior, family life, economic development and social conflict. While always striving for appropriate scientific objectivity, ISR scholars treat religion with the respect that sacred matters require and deserve.