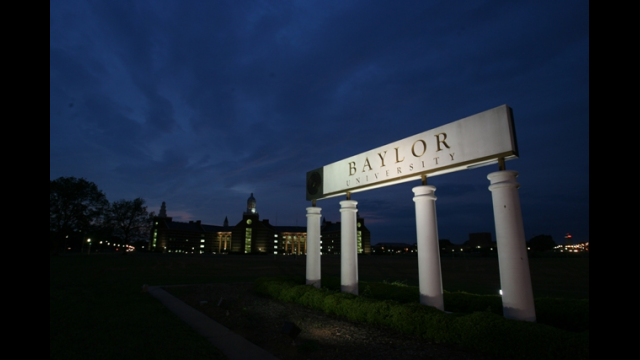 Baylor University closed out a successful fiscal year 2008 with an operating budget surplus for the fourth consecutive year and significant advances in diverse areas of university life, including academic programs, student life and athletics. A financial surplus permitted Baylor to appoint more faculty and staff, to fund the implementation of major strategic initiatives across the university and to advance the goals of the Baylor 2012 vision.

"The end of the fiscal year is an appropriate time for us to take an objective look at our progress as we continue to pursue Baylor's many goals," said President John M. Lilley. "What the data confirm is that across the university we are making tremendous progress on multiple fronts. While the enormity of our potential prevents us from ever being completely satisfied with our efforts, faculty, staff, students, alumni and friends of Baylor University should be greatly encouraged with our remarkably strong trajectory."

Some of the most significant developments occurring during FY 2007-08 include:

• increasing the university's endowment to $1.1 billion, even as endowments nationally have struggled in a difficult market,
• adding 15 new faculty positions and 31 new staff positions,
• establishing the first doctoral degree in Baylor's Hankamer School of Business,
• welcoming the most academically qualified freshman class in university history, with a record average SAT score of 1219,
• enrolling a record-setting 402 students in Baylor's George W. Truett Theological Seminary and an increasing number of students who indicate an interest in vocational Christian ministry,
• increasing the diversity of our incoming class, with Baylor on track to achieve its 2012 goal of 33 percent of our undergraduate student body being persons of color,
• jumping six places in the U.S.News & World Report rankings to No. 75, Baylor's highest overall ranking ever among national doctoral-granting universities,
• making the NCAA Men's Basketball Tournament for the first time since 1987, and seeing Baylor basketball become a positive national story featuring head coach Scott Drew and his team, and
• hiring new head football coach Art Briles, a former Conference USA and National Coach of the Year and new inductee into the Texas High School Football Hall of Fame.

Also during FY07-08, Baylor received more than $80 million in gifts and pledges, including more than $21.9 million given specifically to Baylor's endowment. This is the seventh straight year of a marked increase in the support of endowed scholarships, endowed faculty positions and endowed programs.

Other highlights from the year include:

• a fall enrollment of 14,174 students - the second highest overall enrollment ever at Baylor,
• a record-setting spring 2008 commencement, with more than 1,900 graduates receiving their Baylor degrees,
• an increase to 40 percent of the number of Baylor students living on campus, as the university opened another new residential community, Brooks Village, in fall 2007,
• the selection of Dr. Burt L. Burleson, a 1980 Baylor graduate and pastor of DaySpring Baptist Church in Waco, to serve as university chaplain, providing Baylor students, faculty and staff with spiritual leadership for a Baptist university community that values its Christian identity, and
• the hiring of 1987 Baylor graduate Wes Yeary, a national leader in the training and development of Fellowship of Christian Athletes college team chaplains, as Sports Chaplain, where he will oversee Baylor's team chaplain program and have daily interaction with Baylor's student-athletes with an emphasis on spiritual growth and support.

In other academic news, Baylor began funding the implementation of major strategic initiatives to continue to build upon the university's progress, including:

• a doctoral program in ecological, earth and environmental sciences,
• a special interdisciplinary program in Baylor Environmental Health Sciences that integrates environmental, ecological and earth sciences with the biomedical studies community and health and molecular biosciences programs at Baylor,
• the Academy for Teaching and Learning to help faculty and graduate students achieve a consistently high level of teaching, and
• the creation of a Research Initiative in Terrestrial Paleoclimatology, a program to position the Baylor geology department in becoming nationally recognized among the Ph.D.-granting geo-science departments in the United States.

Baylor experienced a record-setting year for its student-athletes in the classroom. A school-record 449 student-athletes were named to the Big 12 Commissioner's Honor Roll for the fall and spring semesters. For the second consecutive year, Baylor produced the Big 12's highest Graduation Success Rate (GSR) score, with five of Baylor's 18 intercollegiate athletic programs - football, baseball, men's tennis, women's tennis and women's golf - all ranked No. 1 in GSR among their Big 12 peers.

• women's basketball competing in its fifth straight and seventh all-time NCAA Tournament, all under head coach Kim Mulkey, who also became the sixth-fastest coach ever to reach the 200-win milestone,
• Baylor men's and women's tennis winning four Big 12 regular-season and tournament championships, with the men's team advancing to the NCAA quarterfinals and the women playing in the Final Four for the first time in team history,
• Baylor's 4x400 meter relay team sweeping the national championships with its third consecutive NCAA indoor title and its fourth straight outdoor championship, and
• construction under way on the $34 million Alwin O. and Dorothy Highers Athletics Complex and the Simpson Athletics and Academic Center, which includes an on-campus football practice facility, athletics administration offices, and training and academic facilities in one central location.