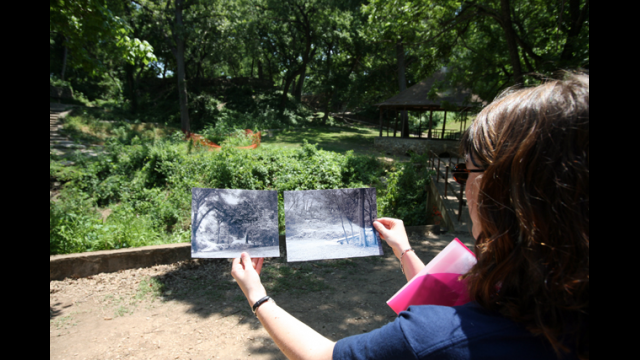 As one of the largest municipal parks in the country, Cameron Park in Waco encompasses dozens of different vegetative species that thousands of area residents enjoy every year. But little has been known about the environmental history of the 416-acre park, until now. Baylor University researchers have completed the first-ever comprehensive study of Cameron Park, analyzing the settlement patterns of the area and studying in-depth how the vegetative species have changed.

"In any type of planning, if you can understand where you're coming from, then you can better plan on where you are going," said Kenna Lang, a Baylor graduate student who conducted the research. "If we can predict the direction a certain species is going in the park, we can target specific management strategies for that area."

Among many of the findings in the 157-page report, researchers found that after the pastures were released and the land abandoned in the late-1800s and early-1900s, cedar trees were the first to move into the area. Broadleaf species moved into the area along the fence-lines and then spread within the park's interior. The results show that eastern red cedar and honey mesquite dominate the cliffs; pecan, eastern cottonwood, black walnut, American elm and oaks are common on the floodplain; eastern red cedar, live oak, cedar elm and Durand's oak dominate the ridge-tops; and elm, sugar hackberry, Texas ash and oaks are common in the stream valleys.

Although live oaks are scattered on the ridge top, the study indicated that their reproduction is limited, and the oaks are only slowly recovering from agricultural clearing.

The report also indicates that exotic trees, shrubs and vines are more common today then they were in the early days of the park. The spread of these exotic species like privet, bamboo, nandina and Japanese honeysuckle could eliminate populations of native wildflowers and suppress reproduction of native trees.

"Based on all of the results, I would say there was likely almost complete clearing of Cameron Park's ridge-top between the 1850s and the 1920s," Lang said. "The amount of fence-lines in the park during that time show animals were intensely grazing there."

The study also documents the overall rich history of the park. In the mid-1800s, despite the proximity of Waco Village to the park, initial settlers only drew on the land for timber and food, but otherwise avoided settling in the area. As the town's population grew exponentially during the late-1800s, people began settling in what would become the park, yet by the early-1900s, people began to value the area's natural beauty and set aside the land for park use.

The 20th century brought the biggest changes to the park, especially the period between 1929 and 1938. The Lake Waco Dam was completed in 1929 and it strongly impacted the park's vegetation because the dam altered the hydrological regime of the Bosque and Brazos Rivers. Changing the hydrology of the area adversely affected floodplain trees like the eastern cottonwood, which depend on periodic floods for reproduction. In 1936, the park experienced "the greatest flood to ever hit the area," causing the Brazos to top 40 feet, and the gage on the Bosque River topped 44 feet, inundating the park's floodplain species and forever changing the vegetation of the park.

The study was financially supported by the C. Gus Glasscock, Jr. Endowed Fund for Excellence in Environmental Sciences.