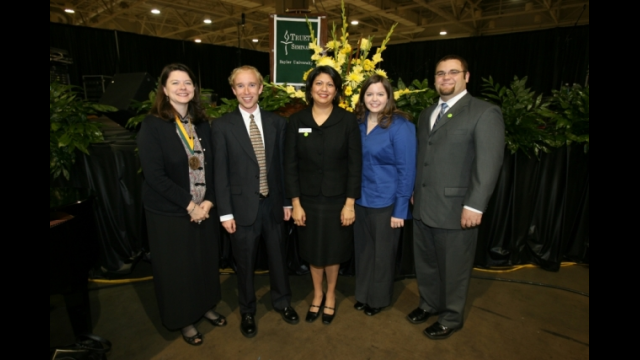 The Truett Distinguished Alumni Award honors a graduate for his or her vision, accomplishments and service to the gospel in both the church and the broader community. The award is presented annually to a graduate whose life work embodies the highest tradition of Baylor's motto, Pro Ecclesia, Pro Texana, For Church, For State.

Burton, an Amarillo native, earned a bachelor's degree in religion from Baylor in 1994 and her master of divinity degree with a concentration in global missions from Truett Seminary in 2000.

Burton currently serves as field personnel with the Cooperative Baptist Fellowship Global Missions (CBF). She has served in Los Angeles as a Baptist chaplain at the University of Southern California, worked with migrants and refugees in North Africa, taught English as a Second Language and ministered among international students and visiting scholars.

Prior to working with CBF, Burton served at Rice University and Texas Medical Center in Houston through Texas Baptist Student Ministries as intern associate director.

"Given CBF's support of Truett since its beginning, it is appropriate to honor an alumnus like Anne Burton, who has given so much to the CBF movement, as well as to Truett Seminary," said Kyle Reese, president of the George W. Truett Alumni Association and pastor of Hendricks Avenue Baptist Church, Jacksonville, Fla.

Truett Seminary, located on the campus of Baylor University, began classes in August 1994 with 51 students. Burton is the third recipient of the Truett Distinguished Alumni Award. The inaugural award was presented in 2004 to Joseph C. Parker Jr., pastor of David Chapel Missionary Baptist Church in Austin. Reese was honored with the award in 2005.

Also at the Friends of Truett dinner, current seminary students Curt Kruschwitz, Amy Hatchett and Will Bollen each were presented with $500 scholarships from the George W. Truett Theological Seminary Fund for Excellence at Baylor. Kruschwitz, who is from Richmond, Va., was honored with the Missions Award. Hatchett of Sugarland was recognized with the Children's Ministry Award. Bollen of Mena, Ark., received the Pastoral Ministry Award. The Truett Alumni Association in partnership with Truett faculty determine scholarship recipients.

Scholarships also are available for students who need emergency financial aid. To give to the George W. Truett Theological Seminary Fund for Excellence, contact Cynthia J. Dougherty, assistant vice president for academic, foundation and corporate development and Baylor Fund, at (254) 710-8642 or Cindy_Dougherty@baylor.edu.