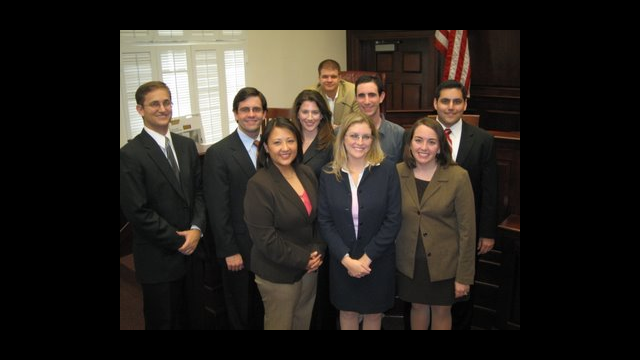 Professor Mark Osler, who coached the students with Gordon Davenport, a 2006 Baylor law grad and a clerk to Judge Walter Smith, said the contest was designed for students who had not previously participated in mock trial competitions. Law students from Baylor, the University of Houston, SMU, and South Texas College of Law competed. "Baylor won the tournament by beating an excellent squad from the South Texas College of Law," Osler said.

Expressing his pride in the Baylor students' performance, he said, "They only had a few weeks to prepare for the tournament, and those few weeks were shortly before and during finals. Still, through hard work they were able to beat teams who had worked on the problem longer and were also very skilled. Watching them practice and compete, my faith in our students was once again renewed."

Osler said he had been informed that the Rookie Mock Trial Tournament will be sponsored annually by SMU. "The tournament was extremely well run, and our thanks go out to the organizers," he said.