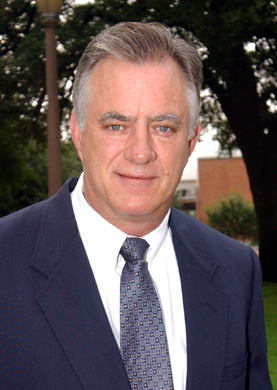 Robert B. Jones, senior lecturer in management and entrepreneur-in-residence at Baylor University and the 2002 Collins Outstanding Professor.

Robert B. Jones, senior lecturer in management and entrepreneur-in-residence at Baylor University, has been named by the senior class as the recipient of the Collins Outstanding Professor award. As the Collins Professor, Jones was recognized at commencement ceremonies on May 18 and received a cash award of $10,000. As Collins Professor, Jones also delivered a lecture prior to graduation, "Teaching: The Challenge of Developing Tomorrow's Leaders."

"I'm shocked that I have been elected the Collins Professor," Jones said. "There are so many good professors on campus. Since it's a student-elected award, I consider it the greatest honor."

Jones, who has taught at Baylor since 1992, received his bachelor of arts and bachelor of science degrees from the College of Idaho and his master of business administration from Baylor.

As teacher of entrepreneurship classes at Baylor's Hankamer School of Business, Jones received the business school's Teaching Excellence Award for Non-Tenured Faculty in 1994 and the Alpha Kappa Psi Outstanding Professor award in 1997, also a student-elected award.

In his entrepreneurship class, Jones' students make a business plan, and he covers the many areas they have to manage to operate a business. "An entrepreneur has to be a jack of all trades. I give a cash award to the best plan," Jones said. Before becoming a teacher, Jones owned the area distributorship for Evanrude Motors and Chris-Craft Boats.

The Carr P. Collins Foundation provides funds for the Collins Outstanding Professor program, which was initiated to honor outstanding teachers at Baylor. The senior class elects a professor annually.