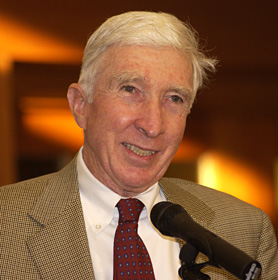 Pulitzer Prize-winning novelist John Updike moved his audience Thursday, Nov. 8, piece by piece through a literary world of terrorism that has now become our everyday lives.

He shared a personal reaction to the attacks in an article written on Sept. 13 for The New Yorker, which chronicled his account of witnessing the surreal scene from a relative's upstairs library window. Updike relived his feelings that he was watching a movie play out before his own eyes as he saw the destruction of the World Trade Center and how his granddaughter fears thunder as a result.

Updike also read a poem titled "Icarus" from his novel Americana, that he recalls "made people uneasy" and which an editor refused to publish. The poem recounts a traveler's fear that his fellow passenger has carried a bomb on board their flight simply to blow up the plane. During the lecture, he also read selections from his novel In the Beauty of the Lilies and a short story titled "The Dark."

Best known for his series of novels that chronicle the life of character Harry "Rabbit" Angstrom beginning with Rabbit, Run, Updike was chosen by the Zeta chapter of Phi Beta Kappa as this year's Roy B. Albaugh lecturer for his remarkable talent to relate to his audience.

At a meeting with reporters Thursday afternoon, Updike gave evidence of this inspiring countenance when asked about his writing. A man who smiles with both his eyes and his mouth, it was obvious that he wanted others to take on the task that he describes as an act of faith.

When asked how he would advise students aspiring to write Pulitzer Prize-winning novels, Updike suggested, "Don't think too hard about the prize. You don't get (prizes) far more than you do."

He also shared that students must have a goal to see their work in print, attempt steady application to make space in their life to practice the craft and offered, "somebody has to hit the target and it might as well be you."

Insight into his time-honored skill leads us to his belief that writing allows him to find what is real enough, interesting enough, and surprising enough about people to keep doing it. He simply states, "We are not by large on top of things, and that is what makes the human condition worth writing about."