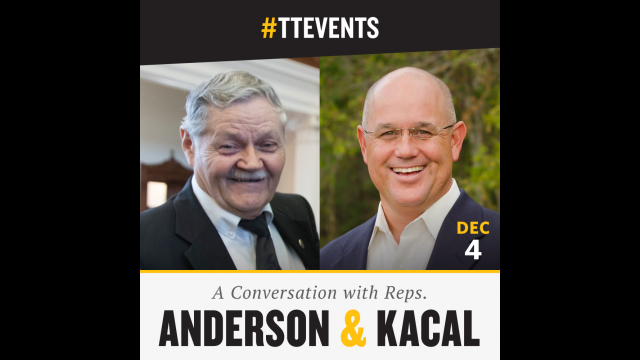 Republican State Reps. Charles “Doc” Anderson of Waco and Kyle Kacal of College Station will join Texas Tribune co-founder and CEO Evan Smith for a lunchtime conversation on various issues ranging from immigration and healthcare debates affecting their constituents to the results of the midterms and the upcoming 2019 legislative session.

Anderson has represented House District 56 since 2005. He serves as vice chair of the House Energy Resources Committee and sits on the Agriculture and Livestock Committee. He serves on the statewide Agricultural Policy Council and is a board member of the Texas Conservative Coalition Research Institute and the State Agricultural and Rural Leaders. Previously, Anderson served on the Texas Small Business Advisory Council and worked as a small-animal veterinarian in Waco.

Kacal has represented House District 12 since 2013. He serves as vice chair of the House Rules and Regulations Committee and sits on the Environmental Regulation, Natural Resources and Calendars committees. He serves on various business and community boards, including the Texas Beef Extension, Brazos Valley Farm Bureau and the Allen Academy School Board. Kacal also operates a ranching business in Brazos County.

Doors open at 11:30 a.m. and a light lunch will be provided. The conversation, which will be livestreamed, will begin promptly at noon. The panel discussion will be followed by an audience Q&A session. The livestream will be available at texastribune.org/events, and the video will be available for viewing afterward.

This event is presented by Blue Cross and Blue Shield of Texas and supported by Pearson and Independent Colleges and Universities of Texas, Inc. (ICUT) and is hosted by Baylor University. This series of conversations is sponsored by AT&T, PepsiCo, Walmart and Southwest Airlines, the official airline of Texas Tribune Events. Foundation support is provided by the Hatton W. Sumners Foundation.

The Texas Tribune is a nonpartisan, nonprofit media organization that informs Texans — and engages with them — about public policy, politics, government and statewide issues. Learn more at texastribune.org.

The Baylor Club is located inside McLane Stadium at 1001 South Martin Luther King Jr. Blvd. on Baylor University’s campus in Waco. Complimentary visitor parking is available in the lot surrounding the stadium.

The Texas Tribune Presents: “A Conversation with Reps. Doc Anderson and Kyle Kacal”

A light lunch will be provided. Event begins promptly at noon.