Institute for Studies of Religion to Honor Rev. Billy Graham’s Centennial with Symposium 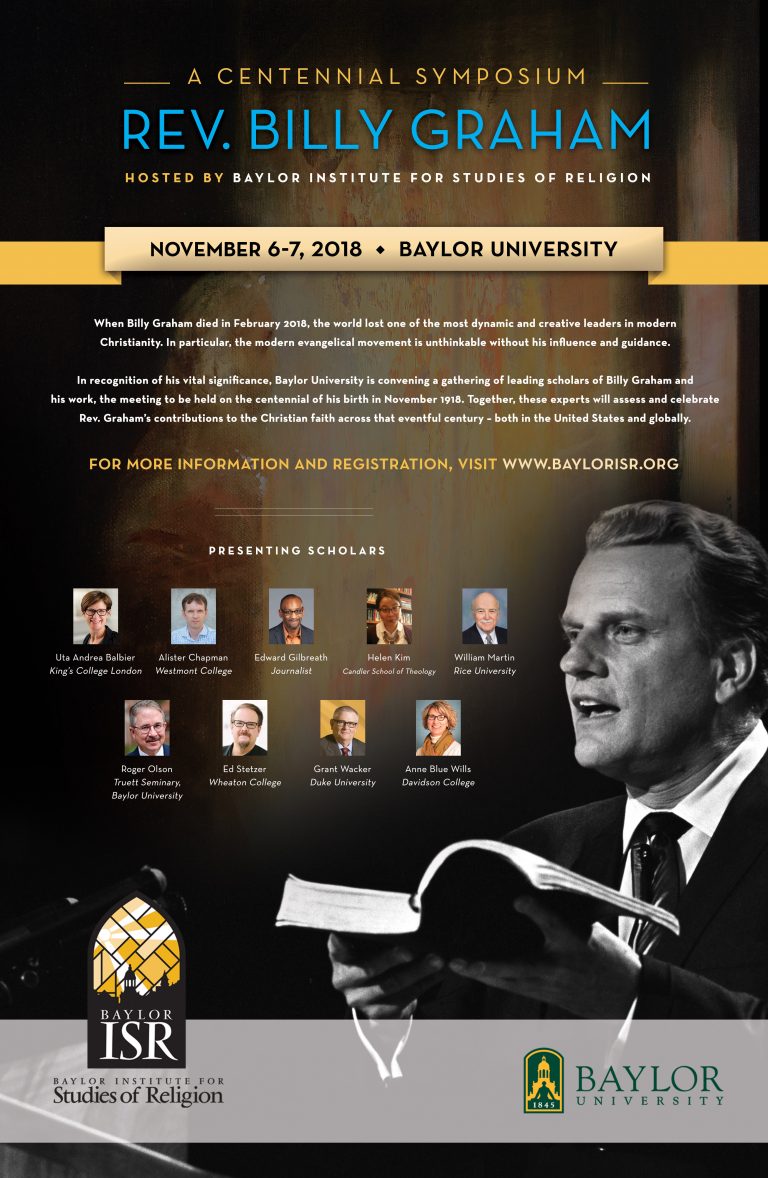 WACO, Texas (Nov. 2, 2018) – To recognize Rev. Billy Graham’s vital significance, Baylor University’s Institute for Studies of Religion (ISR) will host the Billy Graham Centennial Symposium, a gathering of leading scholars of Graham and his work to honor the centennial of his birth, from Tuesday, Nov. 6, to Wednesday, Nov. 7, in the Paul Powell Chapel of the George W. Truett Theological Seminary, 1100 S. Third St.

Elesha Coffman, Ph.D., assistant professor of history in Baylor’s College of Arts & Sciences, said Graham’s birthday would be an opportune time for discussion of Graham’s legacy, focusing on two specific areas: Billy Graham in global perspective and Billy Graham in American Evangelicalism. Baylor is known as a hub for research on both topics, she said.

“The invited scholars come from diverse backgrounds and bring a variety of research questions to the study of Graham, world Christianity and evangelicalism,” Coffman said. “The symposium aims for a balance of appreciation of this towering figure and critical engagement with his complicated legacy.”

During the symposium, experts will assess and celebrate Rev. Graham’s contributions to the Christian faith across the century, in the United States and globally.

Symposium events and speakers include:

11 a.m. – Ed Stetzer, Ph.D., Billy Graham Professor of Church, Mission and Evangelism; executive director of the Billy Graham Center; and dean of the School of Mission, Ministry and Leadership, Wheaton College, will present “The Legacy of Billy Graham.”

Coffman said the keynote addresses and roundtable discussions promise to be lively and timely.

“The goal of any symposium is to facilitate an exchange of ideas that can only happen in a roomful of engaged participants, including audience members, with different perspectives,” Coffman said. “The more of these perspectives we can gather, the richer the event will be for everyone.”

The symposium is free of charge.