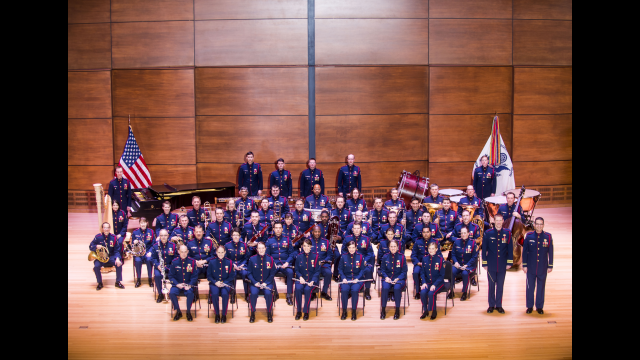 WACO, Texas (June 20, 2017) – As the second stop on its annual tour, the United States Coast Guard Band will perform at Baylor University at 7:30 p.m. Saturday, July 22, in Jones Concert Hall.

Many of the 55 members of the U.S. Coast Guard Band are graduates of the nation’s finest music schools. The audition process is extremely competitive and includes a background check, solo performance and interview.

Musician-Chief Petty Officer Gino Villarreal, a trumpeter from Rio Grande City, graduated from Baylor’s School of Music with a B.M. in Applied Music in 2002.

The concert is free and open to the public, but tickets must be acquired in advance. To reserve a maximum of four tickets, call the School of Music box office at 254-710-3571, or obtain them in person Monday through Friday, from 8:30 to 11:30 a.m. and from 1:30 to 4:30 p.m. “Will call” tickets may be picked up in the lobby before the performance.

Jones Concert Hall is located in the Glennis McCrary Music Building, 110 Baylor Avenue, and is accessible to those with disabilities.

For more on the United States Coast Guard Band, visit www.uscg.mil/band, “like” them on Facebook, or call their Concert Information Line at 860-701-6826.