Expanding the Baylor Family through Adoption 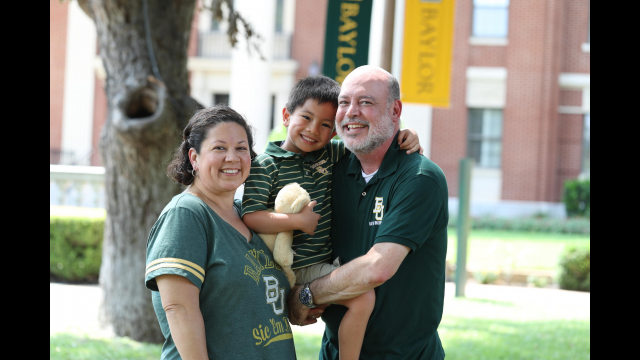 Steve Cates, a senior lecturer in Baylor's department of mathematics, and his wife, Cindy, adopted David from the New Day Foster home in China when he was 18 months old. (Robert Rogers, Baylor Marketing & Communications)
Tweet
June 23, 2017

Psalm 68:5-6 – "Father of the fatherless and protector of widows is God in his holy habitation. God settles the solitary in a home…"

Employees at the New Day Foster Home in Beijing, China believed this heart condition may have been the reason he was abandoned by his birth parents. They added his name to a list of children with special needs who were eligible for adoption.

A few short months later, Yuan received a package in the mail. Inside was a Baylor University T-shirt, a stuffed bear and pictures of the family that awaited him in Texas, where he would have a new start and a new name, David Cates.

Steve Cates, a senior lecturer in Baylor's mathematics department, and his wife, Cindy, had tried to adopt a child for more than five years before they heard about David. When they traveled to China to meet him and bring him home, they learned from a doctor's examination that the hole in David's heart had suddenly healed.

Stories like the Cates' are becoming increasingly common around Baylor's campus, due in part to the adoption assistance program implemented on April 1. According to Cheryl Gochis, vice president and chief human resources officer at Baylor, only a handful of universities provide adoption assistance benefits to employees.

Gochis worked with her team for over a year to craft the new policy. She said the adoption assistance benefit was a natural outflow of compassion for the Baylor family.

"We wanted to make sure we were doing the right thing," Gochis said. "Our thought is that this is the beginning, and that in a few years we could expand it even more."

In the near future, she hopes to listen to feedback from Baylor's adoption community to further expand the resources the university provides to families.

Changing the lives of children and families

Gochis's own life has been greatly impacted by adoption. Her daughter, Hannah, was adopted from China, and her nephew is none other than David Cates.

Gochis said she hopes that the show of support for adoptive parents will encourage Baylor faculty members who are considering adoption to make it a reality.

According to the 2012 National Foster Care Adoption Attitudes Survey, 81.5 million Americans have considered adoption at some point. If just one in 500 of these adults adopted, every waiting child in the foster care system in the United States would have a permanent family.

"When we were putting the policy together, we said 'This is for all those people that maybe just need the right encouragement to adopt,'" Gochis said. "The intent of the adoption benefit was to give a little bit of help getting there, however you choose to do that."

Assistant professor of economics Mark Kelly, Ph.D., and his wife had talked about adoption for years, but hesitated to start the process because of the cost.

They began researching legal-risk adoption through the foster care system, a less expensive option than going through an international agency. When foster children are unlikely to be reunited with their biological parents, families like the Kellys can foster and potentially adopt them.

Under the new adoption assistance program, Kelly estimates that Baylor will reimburse 100 percent of their adoption costs.

"We had just started seriously talking about adoption when I got the email that HR sent out to all the faculty and staff. I immediately forwarded it to my wife and said, 'You've got to look at this,'" Kelly said. "We were really excited because it's not anything I even knew was on the radar."

The Kellys have just submitted their paperwork to begin the legal-risk adoption process, but other Baylor employees have already welcomed a new member into their families since the implementation of the adoption assistance policy.

'The baby's ready to come home'

Erin Shoemake, assistant to the executive vice president and provost, began the adoption process in 2014. She and her husband didn't specify any preference for gender in their application, but she secretly hoped for a baby girl.

Shoemake created a small book with photos and details about her family to help birth mothers with their decision, but she waited for months before hearing any news.

The phone call came on April 6, only five days after Baylor's adoption assistance policy was announced. An employee from the adoption agency told Shoemake about a healthy newborn girl whose mother wouldn't be able to care for her. Shoemake gave the agency permission to show the birth mother her photo book.

Then, Shoemake heard the words that would change her life forever:

"We've already shown her all the books, and she's chosen you. The baby's ready to come home."

Less than a week later, Shoemake held Naomi, her only child, for the first time. Shoemake said she couldn't imagine adjusting to life as a new parent without having several weeks to bond with the child. During her six weeks of parental leave, Shoemake brought Naomi to campus several times to meet her coworkers in Pat Neff Hall.

"Life as a new mom is amazing. She's amazing. It's a whole new world," Shoemake said. "I'm so excited to see who she'll grow up to be and to do the best for her that we can. Looking back, it's been incredible to see how God has orchestrated the whole process."

Gochis said she's amazed by the large number of Baylor employees like Shoemake who have already expressed interest in adoption and the adoption policy.

Her nephew, David Cates, received the Sunshine Award at his kindergarten graduation this year for his joyful attitude and optimism. No trace of a broken heart remains.