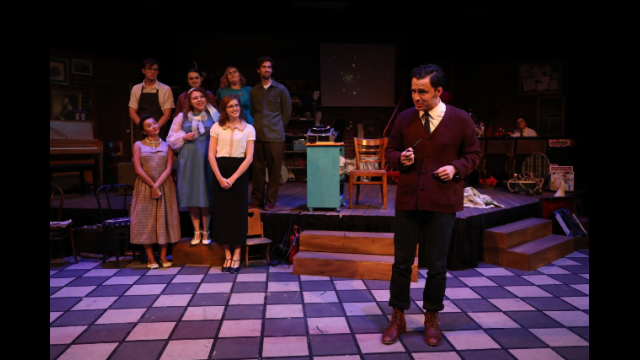 Narrator Tom Newton, played by Noah Patten, introduces the cast of Baylor Theatre's "Who Am I This Time?" to the audience.
Tweet
June 22, 2017

WACO, Texas (June 22, 2017) – In the words of the show’s narrator, Baylor Theatre’s latest production tells a story of “love, pure and complicated.”

Aaron Posner’s “Who Am I This Time? (& Other Conundrums of Love)” is based on three short stories by author Kurt Vonnegut. The plot revolves around a new girl in town and a talented yet painfully shy actor who audition for the lead roles in a community theatre production of “A Streetcar Named Desire.”

Director DeAnna Toten Beard, Ph.D., is a professor of theatre history and associate chair in Baylor’s department of theatre arts. She decided the lighthearted show would be a good change of pace after the heavy subject matter and stark realism of “Grand Concourse,” which closed last weekend.

With the exception of Toten Beard, the show was put together almost exclusively by students.

“The costume designer, lighting designer, scenic designer and music director are all Baylor undergraduates who did all of this work themselves. It’s a real showcase of our undergraduate talent,” Toten Beard said.

Each cast member of “Who Am I This Time?” plays an instrument in the show. The script already included a song, but Toten Beard wrote another musical number into the play that would suit the actors’ instruments.

Noah Patten, a senior in Baylor’s theatre arts department, said he thinks the music underscoring the show gives “Who Am I This Time?” a cheerful tone. Patten plays Tom Newton, the show’s narrator, who interacts with the audience often.

“He kind of leads the audience through the stories happening with the rest of the characters onstage. He tells the audience what they need to know, while also giving up a little bit of information about himself,” Patten said.

San Antonio junior Juliana Zepeda plays Tom’s wife, Kate, a take-charge woman with a passion for theatre. She said she hopes audiences will view Kate and Tom’s relationship as proof that love is always a positive force, even though it takes many forms.

“In the midst of everything going on in the world, love is the one thing that’s a constant and can always be found. I think it’s the most helpful solution there is to anything,” Zepeda said.