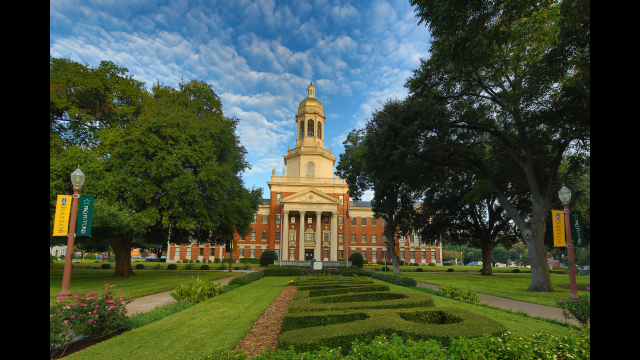 WACO, Texas (June 22, 2017) – Baylor University today announced that the philanthropic support of alumni, parents and friends during the recently completed fiscal year that spanned June 1, 2016, to May 31, 2017, exceeded $100 million in gifts, pledges and planned giving commitments, marking the sixth consecutive year the University has surpassed that benchmark in fundraising.

“The Baylor Family’s powerful love for Baylor University is made evident by this truly remarkable level of financial support,” said Baylor President Linda A. Livingstone. “That our alumni, parents and friends have once again stepped up to commit more than $100 million in financial support during the past year clearly indicates a resolute desire to support Baylor students and Baylor’s distinctive Christian mission, as well as their strong belief that we are acting as responsible stewards of these gifts.”

Eighteen separate gifts and commitments of $1 million or greater are included in the total amount reported during the recent fiscal year. These gifts will directly benefit a wide range of academic programs and institutional initiatives, including the department of geosciences within the College of Arts & Sciences, Louise Herrington School of Nursing, Hankamer School of Business, Truett Seminary and Baylor Law School, as well as the Texas Hunger Initiative, the Beauchamp Addiction Recovery Center and the Black Gospel Music Restoration Project.

“The generous philanthropic support provided by our alumni, parents and friends this past year, as well as during the previous five years, speaks to the amazing affinity and passion of our Baylor Family,” said Dave Rosselli, vice president for university development. “The University’s success in fundraising this year also is a testament to the dedication and excellent work of many people at the University, from senior administrators and our staff in University Development to academic deans and members of Baylor’s faculty and staff across campus.”

The impact such philanthropy has had on the University cannot be overstated. During the previous six fiscal years – from June 1, 2011, to May 31, 2017 – Baylor University’s skyline has been transformed by the addition of major new facilities, ranging from the Paul L. Foster Campus for Business and Innovation on Bagby Avenue to McLane Stadium and Clyde Hart Track and Field Stadium along the banks of the Brazos River.

Gifts from alumni, parents and friends during the past six years also have enabled Baylor to improve student life programming and undergird academic excellence in several departments across campus. In December 2016, the University announced the creation of the Beauchamp Addiction Recovery Center (BARC), a multifaceted program that is dramatically enhancing Baylor’s efforts to foster the holistic well-being of its students by providing an array of on-campus recovery support services, as well as programming to strengthen prevention education and intervention support.

A combination of major gifts and widespread support throughout the year has given Baylor the means to begin renovations to the four-story, former Baptist General Convention of Texas Building in Dallas for use by Baylor’s nationally ranked Louise Herrington School of Nursing (LHSON), an $18-million project that will be completed in the summer of 2018. Located adjacent to the current LHSON building and Baylor University Medical Center and near more than 150 professional nursing practice sites in Dallas-area communities, the Louise Herrington School of Nursing Academic Building will add almost 100,000 square feet of expanded space for active learning classrooms, student services, a new auditorium and offices for faculty and administration.

A gift of $2 million in May 2015 enabled the film and digital media program to become a freestanding department within the College of Arts & Sciences, and a $1 million gift in April 2017 will give the department of geosciences the capacity to provide undergraduate and graduate students with dramatically enhanced opportunities to conduct research under the mentoring guidance of faculty members. In spring 2017, School of Education students participated in Baylor’s first embedded global classroom experience, which was made possible by a donor. The program helps students participate firsthand in comparative education experiences in locations around the globe.

The department of communication sciences and disorders within Robbins College of Health and Human Sciences opened the fall 2016 semester in a renovated Cashion Academic Building, one of many enhancements to the program attributable to a prior-year transformational gift of $10 million. The gift is funding a wide variety of growth-oriented initiatives within the department, including an endowed fund for faculty support generating increased scholarly and teaching efforts. The gift has allowed the program to expand its service to those with speech-language needs in Texas and positioned the department for national impact as a leader in the field of speech language pathology.

Of profound benefit to Baylor’s more than 16,000 students has been an increasing momentum in the creation of endowed scholarship funds in recent years, which has helped open doors to higher education that might otherwise have remained closed. More than 75 scholarship funds were created during the 2016-2017 fiscal year, bringing the total number of new scholarship funds established during the past six years to more than 350. These funds, in combination with those established prior to 2011, provided $23.8 million in scholarships to 3,737 recipients last year.

“It’s truly wonderful to see so many alumni, parents and friends answering the call to come alongside the University to help students realize their dreams of a Baylor education and to support our ongoing growth as a Christian research institution,” said Livingstone, who became Baylor’s 15th president on June 1. “All of us at Baylor are extremely grateful for and inspired by this outpouring of generosity, and with God’s grace the days ahead will be Baylor’s best.”