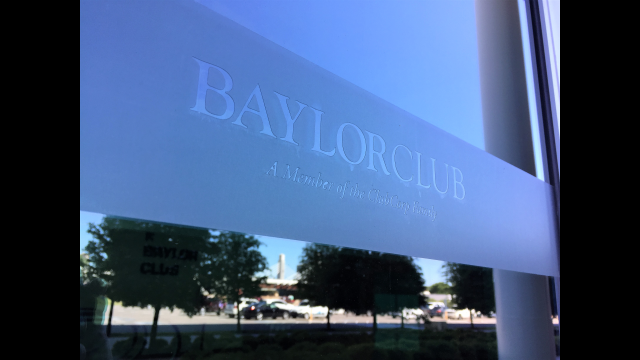 WACO, Texas (June 15, 2017) – Baylor Club at McLane Stadium has been named ClubCorp's "Club of the Year" for 2016 -- the first time this designation has been presented in ClubCorp history -- and also received the 2016 Gold Circle of Excellence award, the most prestigious performance recognition award given by ClubCorp.

"We are very excited to be named Club of the Year as well as receive the award for excellence, but I am even prouder of our staff," said Mike Mosel, Baylor Club general manager. "The team worked hard all year to achieve the club's goals and provide members and guests with excellent service and memorable experiences. Each and every one of them deserves accolades."

ClubCorp awards the Gold Circle of Excellence annually to clubs based upon achievement of specific objectives and performance goals. The Gold Circle of Excellence criteria focuses on key business initiatives, including membership, member retention, operating profits, efficiency and delivering on ClubCorp's central purpose of "building relationships and enriching lives."

Baylor Club currently has more than 2,200 memberships and anticipates more than 2,400 by the end of the year.

The Gold Circle of Excellence was presented this year to only 18 of the company's more than 200 golf and country clubs, business clubs, sports clubs and alumni clubs.

Baylor Club, located inside McLane Stadium, serves as the hub of the Waco community where present and emerging city leaders build camaraderie and strengthen the city in the great tradition of Baylor University. The club offers upscale and casual dining, business amenities that include private workspaces and conference rooms, and a variety of premier private event spaces. More information is available at www.thebaylorclub.com or 254-710-8080.

Since its founding in 1957, Dallas-based ClubCorp has operated with the central purpose of Building Relationships and Enriching Lives. ClubCorp is a leading owner-operator of private golf and country clubs and private business clubs in North America. ClubCorp owns or operates a portfolio of over 200 golf and country clubs, business clubs, sports clubs, and alumni clubs in 26 states, the District of Columbia and two foreign countries that serve over 430,000 members, with approximately 20,000 peak-season employees. ClubCorp Holdings, Inc. is a publicly traded company on the New York Stock Exchange (NYSE: MYCC). You can find ClubCorp on Facebook at facebook.com/clubcorp and on Twitter at @ClubCorp .