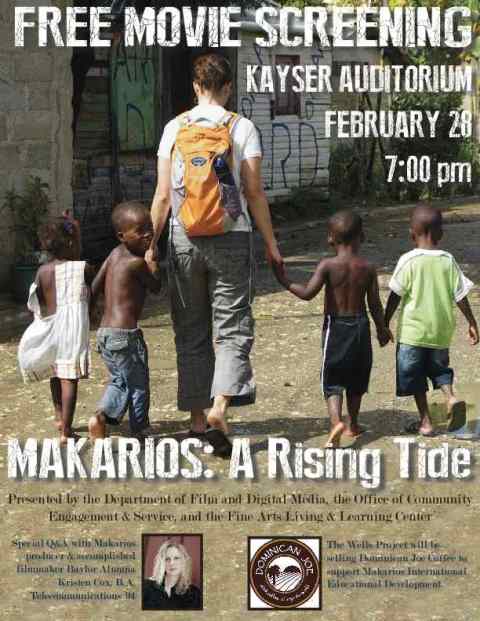 Winner of the White Lotus Award for Social Consciousness in Filmmaking at the Macau China International Digital Cinema Festival, "Makarios: A Rising Tide" explores the story of remote Dominican Republic preschool, Makarios. Along with education, the school also provides food, vitamins, clothing and medical care as a part of a sponsorship program.

The documentary invites viewers to recognize the harsh reality of these villagers, the animosity between Dominicans and Haitians and the cycle of extreme poverty. Few would guess that cycles of extreme poverty can be eradicated through the education of pre-school students but, Makarios is banking on it.

Cox, who graduated from Baylor in 1996 is a member of the Consumer Electronics Association's Academy of Digital Pioneers and the Academy of Television Arts and Sciences. She started her career at KWTX, the CBS affiliate in Waco, Texas, where she honed her television and video skills and assisted in the production of live evening newscasts. She later went to work for HD VISION, where she became one of a select few HDTV producers in the United States. She produced the first live HDTV transmission of a sporting event: the Baltimore Orioles vs. Cleveland Indians baseball game for Harris Corp., viewed by members of Congress and the FCC at the National Press Club in Washington, D.C., who were interested in seeing for themselves whether HD was indeed a viable new product for consumers.

As President and CEO of 16x9 Productions, started in 1999, Cox has produced programs for Discovery HD, PBS, In HD, Wealth TV and HD Net. She also produces industrial content, live concerts and independent films and documentaries and has won numerous awards from Telly, Aurora, Aegis, CES, Videographer, Summit, Cinema Chicago and the Communicator, as well as nominations for outstanding work by the International Electronic Cinema Festival (IECF). Cox also was recognized by AV Video Multimedia Producer Magazine as one of the Top 100 Producers of 2000.

"I hope that this documentary and our Q&A conversations afterwards will inspire students to think of innovative ways they can use their future career and their relationships with people in other disciplines to bring about positive change in the world," Cox said.

"Being a Baylor grad is more than a step to a lucrative career. We should be using our education, connections, gifts and talents toward a much higher purpose."

For additional information about the film and nonprofit organization, visit makariosinternational.org.