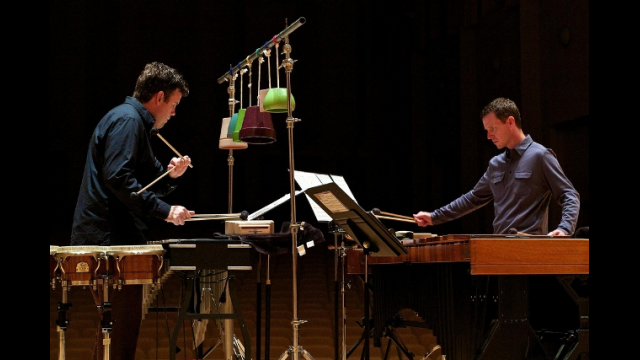 WACO, Texas (Feb. 27, 2013) - From Sydney to London, contemporary classical music is growing increasingly popular in the world's most famous concert halls. The progressive genre will come to Waco when the Baylor University School of Music presents concerts with Sō Percussion, the Meehan/ Perkins Duo and other guests March 1 through March 2.

Sō Percussion is a modern percussion ensemble that has pioneered changes in contemporary classical music for more than a decade. The ensemble has been critically acclaimed by numerous publications. The New York Times said, "Time and again ...you found yourself smiling in a quiet amazement that could verge on disbelief." The group has recorded more than a dozen albums, toured around the world and has participated in several collaborative and educational projects.

A second percussion group featured in concert will be the Meehan/Perkins Duo, which began in 2006 and has established a reputation as the "new face of the modern American percussion duo." A review in The New Yorker praised its "superb young players," and The Wall Street Journal called the duo "gifted percussionists." It has worked with several composers including David Land and Paul Lansky and has performed in internationally-renowned venues such as Weill Recital Hall at Carnegie Hall and the Percussive Arts Society International Convention.

In addition to their concerts, these artists will participate in two days of masterclasses, discussions and performances as part of the School of Music's 2013 Symposium, an effort to increase the interaction between composers and performers and cultivate dialogue between professional and student musicians. In previous years, the event has brought guests such as Pulitzer Prize winners Steve Reich and David Lang.

The symposium's events are free and open to the public. They will take place in Jones Concert Hall of the Glennis McCrary Music Building, 110 Bagby Ave. More information is as follows:

As part of this concert, Iannis Xenakis' famous percussive work Pléïades will be performed with instruments created specifically for the piece and shipped from Brooklyn. The concert will begin at 7:30 p.m.

This concert will feature the percussion music of Paul Lansky and include the world-premiere performance of Jason Treuting's Machine Music.

For further information, contact Todd Meehan at todd_meehan@baylor.edu, or visit the symposium's page by clicking here.