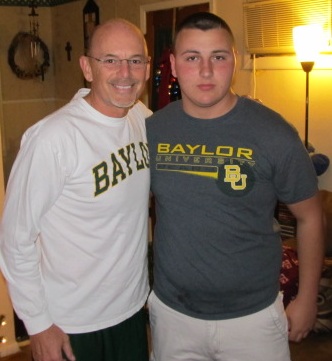 Johnson's commitment to his Little Brother is "the epitome of what we hope to achieve for all of our matches," said Tammy Richards, chief executive officer of Big Brothers Big Sisters. The agency, affiliated with the national Big Brothers Big Sisters program, serves North Texas, North Central Texas, West Central Texas and the greater Houston area.

Johnson has been meeting with Blake West, 16, of Waco, his Little Brother in the program, for more than four years and watched him grow from a youngster to a 6-foot-2 young man who weighs 235 pounds and "looks like a Baylor linebacker," Johnson said.

The two often attend Baylor sporting events, and Johnson's encouragement has helped Blake to excel in his classes, volunteer and join the junior police academy. Johnson's biggest impact has been on Blake's commitment to his future, said Sherry White, Blake's mother. Blake, a high school junior, plans a career in law enforcement after college.

"I signed Blake up for the program because his father wasn't in our lives, and I felt Blake needed a male role model," White said. "He got approved and matched up with Byron, and Byron has been a tremendous inspiration. Blake wasn't too excited about going to college, but now he is, and he wants to get the good grades. Byron is always there for him when he needs a little advice . . . Blake has cheered up and grown up."

Johnson, who has done a great deal of research on religion's role in prosocial youth behavior, said that he and his wife were approaching the "empty nester" phase of the lives when he decided to get involved with Big Brothers Big Sisters.

"I knew in my head, based on all the best research, that this works, and I thought, 'Why shouldn't I be trying to help? This is important,'" Johnson said.

Besides attending games and concerts with Johnson, Blake spends time with his mentor's family.

"He gets along great with them all," Johnson said. "He's doing great in school, and we talk about college and career. We laugh and cut up. And even though we're as different as night and day, he can read me like a book, and I can read him."

Blake, meanwhile, said that when he began the Big Brothers Big Sisters program, "I really didn't know what it was, what I was getting into. But when I first saw him (Johnson), he seemed like a really nice guy, a really cool guy. We're both laid back and into sports.

"I've always wanted to go into law enforcement, and he supported me," Blake said. "He wants to take me to Sam Houston State (which has a criminal justice program) for a tour. I'm glad he's been in my life this whole time."

White said Johnson also has been there for Blake during difficult times.

"Byron had just come in from one of his trips, and my dad was in the hospital," she said. "Byron's wife picked him up at the airport, and he came up to the hospital for a few minutes to be there for Blake, because he knew Blake was upset."

"They don't want to create friction or tension in the family; they want to be able to fill a void," he said.

Many people seek to become a Big Brother or Big Sister with the idea of "I'm going to help someone," Johnson said. "You need to go into it if you are called, but I think the people that do the mentoring are really the big winners. It's not a one-way relationship in which the 'Big' helps the 'Little.'"

The program aids children facing adversity, who often are from single or low-income households or families in which a parent is serving in the military or incarcerated. The goals are to help the children achieve educational success, avoid risky behaviors and develop higher aspirations, confidence and better relationships. Partnering with parents/guardians, schools, corporations and others in the community, Big Brothers Big Sisters pairs children ("Littles") with screened volunteer mentors ("Bigs") and monitors and supports these one-to-one relationships throughout their course. For more information on the program, visit www.bbbstx.org

In addition to directing ISR, Johnson is Distinguished Professor of the Social Sciences and leads Baylor's Program on Prosocial Behavior. He is a senior fellow at the Sagamore Institute for Policy Research and has directed research centers at Vanderbilt University and the University of Pennsylvania and completed a series of studies for the Department of Justice on religion's role in prosocial youth behavior.

He is recognized as a leading authority on the scientific study of religion, the efficacy of faith-based organizations, domestic violence and criminal justice. His research also has been used in consultation with the Department of Defense, Department of Labor and the National Institutes of Health.