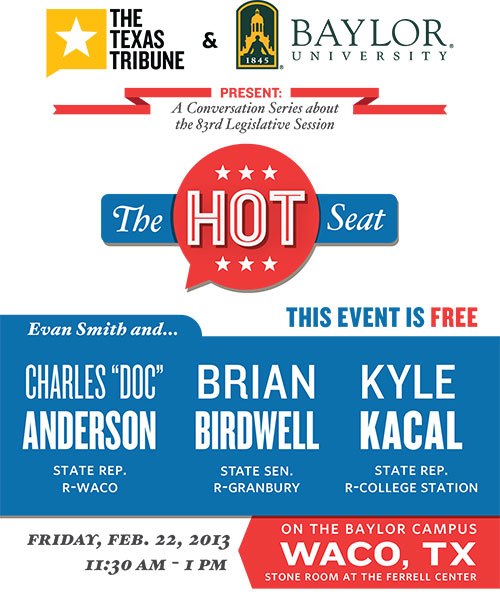 WACO, Texas (Feb. 5, 2013) - State Rep. Charles "Doc" Anderson, R-Waco, state Sen. Brian Birdwell, R-Granbury, and state Rep. Kyle Kacal, R-College Station, will be featured in The Texas Tribune's "The Hot Seat in Waco" from 11:30 a.m. to noon Friday, Feb. 22, in the Stone Room at Baylor University's Ferrell Center. The event is free and open to the public, but reservations are required. A light lunch will be served with the event beginning promptly at noon.

The Texas Tribune hosts the popular conversation series at universities throughout the state and invites elected officials to discuss local issues now before the 83rd Texas Legislature. The Feb. 22 program in Waco will be introduced by Baylor President Ken Starr and moderated by Evan Smith, editor in chief and CEO of the Texas Tribune, a non-profit, non-partisan digital news organization based in Austin.

Rep. Charles "Doc" Anderson has represented House District 56 since 2005 and has served as the vice chairman of the House Agriculture and Livestock Committee. A Waco veterinarian since 1981, Anderson also has sat on the Rules and Resolutions and Pensions and Investments committees.

Sen. Brian Birdwell represents Senate District 22 and serves as vice-chair of the Veteran Affairs committee and as a member of the Higher Education, Government Organization and Economic Development committees. First elected in 2010, Birdwell is a retired U.S. Army lieutenant colonel, survivor of the 9/11 terrorist attack on the Pentagon and the founder of a nonprofit called "Face the Fire Ministries," which assists critical burn survivors and wounded servicemen and women.

Rep. Kyle Kacal is serving his first term in the Texas House after winning a primary runoff and general election race in 2012. Kacal lives and works on his 2,400-acre ranch in Brazos County, where he serves on various business and community boards, including Texas AgriLife Beef Extension, the Brazos Valley Farm Bureau and the Allen Academy School Board.

The Hot Seat is underwritten by the KDK-Harman Foundation, with additional support from AT&T, BP, Raise Your Hand Texas, Christus Health, the Texas Coalition of Dental Service Organizations and 83rd legislative session sponsor My Plates. Tribune events are also supported through contributions from founding investors and members.

WHAT: The Texas Tribune Presents: The Hot Seat in Waco

A light lunch will be provided. Event begins promptly at noon.

ABOUT THE TEXAS TRIBUNE

The Texas Tribune is a nonpartisan, nonprofit media organization that promotes civic engagement and discourse on public policy, politics, government, and other matters of statewide concern. In its first three years of operation, the Tribune has won a slew of national recognitions, including four Edward R. Murrow awards, a Knight-Batten award for innovations in journalism and a General Excellence award from the Online News Association.