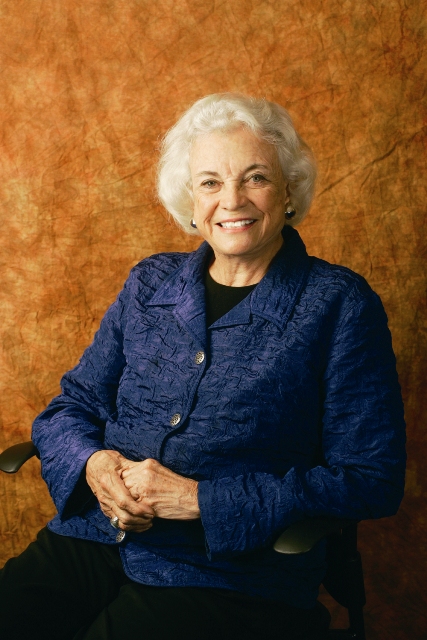 Baylor University President Ken Starr will welcome Justice Sandra Day O'Connor - the first female member of the U.S. Supreme Court who served from 1981 until her retirement from the Court in 2006 - to the Baylor campus for "On Topic With President Ken Starr," a series of compelling conversations on contemporary issues, at 1 p.m. Monday, April 30, in Waco Hall on the Baylor campus. (ASU photo by Tom Story. Copyright Arizona Board of Regents. All Rights Reserved.)

First female member of the U.S. Supreme Court joins Baylor President in compelling conversation April 30 about iCivics, her service to the country and important issues facing the nation

WACO, Texas (April 23, 2012) - Baylor University President Ken Starr will welcome Justice Sandra Day O'Connor - the first female member of the U.S. Supreme Court who served from 1981 until her retirement from the Court in 2006 - to the Baylor campus for "On Topic with Ken Starr," a series of compelling conversations on contemporary issues, at 1 p.m. Monday, April 30, in Waco Hall on the Baylor campus.

President Starr and Justice O'Connor will discuss her passion for civic education, her founding of iCivics - an innovative web-based learning program designed to prepare young Americans to become knowledgeable, engaged 21st century citizens - as well as reflect on her years of distinguished service to the United States.

Admission is free and requires a ticket. However, the event has experienced high demand for tickets and remaining seats are limited. Tickets may be picked up at the Bill Daniel Student Center Ticket Office Monday-Friday from 10 a.m. to 3 p.m. through April 27. Overflow seating will be available on the day of the event and also requires a ticket. The Waco Hall Box Office will open at 10 a.m. April 30 and begin distribution of any remaining Waco Hall tickets and overflow tickets on a first-come, first-served basis. Seating for the event will begin at noon.

Prior to the "On Topic" event, Justice O'Connor will participate in a research symposium on "Civics Education in K-12 Schools: An iCivics Approach" on the morning of April 30 at the Waco Convention Center with Baylor School of Education faculty and Baylor Law School representatives, as well as teachers from 19 Waco and Midway ISD schools. Social studies teachers from these campuses have been involved since September 2011 in a Baylor research project focused on the effectiveness of iCivics as a learning tool by both students and teachers and the impact it has on students' civic understandings and dispositions.

Led by Baylor School of Education faculty members Karon N. LeCompte, Ph.D., and Brooke Blevins, Ph.D., the research project is the first to study the effectiveness of iCivics, founded in 2009 by Justice O'Connor to enrich the educational experience for children studying American history, law and government and to prepare youth to participate in democracy as informed citizens. Justice O'Connor will deliver the symposium's keynote address, "A Vision for U.S. Civics Education," followed by general sessions on Baylor Law School's implementation of iCivics into local classrooms and an overview of the Baylor School of Education research project conducted by LeCompte and Blevins.

Justice O'Connor also will take part in a private reception April 30 with local iCivics teachers on the Baylor campus. On May 1 at Baylor Law School, Justice O'Connor along with President Starr and Texas Supreme Court Chief Justice Wallace B. Jefferson will visit with local schoolchildren about their experiences with iCivics learning activities.

"We are truly blessed to welcome to Baylor University Justice Sandra Day O'Connor, a remarkable defender of our beloved Constitution, who will share her passion for civic education, as well as reflect on her years of distinguished service to our country," President Starr said. "A year ago, I had the high privilege of meeting with Justice O'Connor, where we discussed her growing concerns about the shortcomings of civic education in the American public education system - concerns that troubled her even when the process of upholding the rule of law occupied the full scope of her time and attention. Thus, when Justice O'Connor extended an invitation for Baylor and the surrounding greater Waco community to come alongside iCivics, we were honored and delighted to accept.

"Over the course of the current academic year, Baylor Law School and Baylor's School of Education have been partnering with Waco ISD and Midway ISD administration and teachers to integrate the iCivics content into their curriculum, study the progress of civics education in these classrooms and ultimately publish the results. We look forward to April 30, when Justice O'Connor will join us to celebrate the wonderful strides iCivics has made here in our own backyard," Starr said.

U.S. Supreme Court Justice Sandra Day O'Connor (Ret.) was nominated to be the first woman on the country's highest court by President Ronald Reagan in 1981, receiving unanimous approval from the U.S. Senate. She served as an associate justice from Sept. 25, 1981, until her retirement on Jan. 31, 2006. Described as a moderate conservative who takes a pragmatic view of jurisprudence, Justice O'Connor was often a crucial deciding vote in 5-4 decisions on some of the nation's most pressing issues.

Justice O'Connor was born in El Paso, Texas, on March 26, 1930, and spent much of her childhood on a cattle ranch along the Arizona and New Mexico border. After graduating from Stanford University in 1950 with a bachelor's degree in economics, she attended the university's law school. She received her law degree in 1952, but could not find a law firm willing to hire a woman when she graduated. She began her career volunteering in the County Attorney's Office in San Mateo County, Calif., where she eventually became Deputy County Attorney.

She married John Jay O'Connor III in 1952 and has three sons - Scott, Brian and Jay. She returned to Arizona in 1957, and opened a practice in Maryvale, served as Assistant Attorney General of Arizona, in the Arizona State Senate, as a Judge in the Maricopa County Superior Court and on the Arizona Court of Appeals.

In 2006, the College of Law at Arizona State University was named in her honor, and she frequently speaks and teaches there. In 2009 her accomplishments were acknowledged by President Obama, who honored her with the Presidential Medal of Freedom.