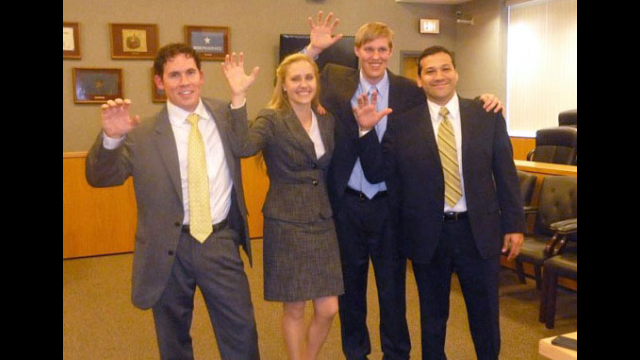 "These young trial lawyers are magnificent," said Gerald Powell, The Abner V. McCall Professor of Evidence and director of Baylor Law's renowned Practice Court Program. "They are smart, talented and hard-working. And they are really good people, too. They are the kind of professionals that any client would be proud to have. I am so proud of them. And their coach, Robert Little, is hands-down the best mock trial coach in America."

A Baylor Law alumnus, Little was a member of the 2005 American Trial Lawyers Association National Championship team. Additionally, he coached the Baylor Law team that won NTC in 2009.

"Taking first and second place is rare and incredibly impressive. I have never heard of it happening," Little said.

Actually it has happened before...but long ago. A Baylor v. Baylor face-off in the finals of the NTC mock trial competition unfolded once before - the Baylor Law team of Ken Patterson, Gil Gilliam, Joe Johnson, Tim Herron and Jim Wren also closed out nationals in the early 1980s.

In addition to the four team members, Holly Raines served as Evidence Coach, while Whitney Keltch and Paul Green were members of the practice squad.

"Holly Raines did an excellent job as the evidence coach for the team," Little said. "She proved herself to be an excellent researcher and really acted as an assistant coach more than an evidence coach in preparing the team for evidence arguments. We were, without question, the most well prepared team on evidence issues at the tournament, and the credit for that, in large part, goes to Holly.

"The work that Paul Green and Whitney Keltch did in practice was immensely helpful," Little added. "The witnesses at nationals are tough, but by the time we got there we had already practiced with the toughest witnesses you could possibly find. This was a real team effort, and they were a major part of that team."

The NTC is the largest and oldest of the mock trial competitions. Approximately 300 teams from across the United States competed at the regional and national level. At the national finals, the 28 regional winners were judged primarily by Fellows of the American College of Trial Lawyers. Both Baylor Law teams qualified for the tournament by winning the regional competition in February.

Competitors at the NTC tried a fictional premises liability case in which a roofer falls through a skylight at a grocery store and is killed. His widow has sued the grocery store.

"What is challenging about the National Trial Competition is that in the post-break rounds (quarterfinals, semifinals and finals), the organizers add a twist to the problem. You have about an hour to eat lunch and incorporate the new facts/witnesses into your game plan. It was very stressful but an advantage for Baylor lawyers who are taught from day one to think on their feet and to be in the moment," Lopez said.

Little said other coaches were quick to praise the current Baylor Law teams, especially their ability to appear so relaxed in the courtroom.

"One coach asked me how we managed to find four law students who are so comfortable in the courtroom," he said. "But that is what we teach them to do from the moment they enter Baylor Law School. They weren't putting on a play or acting from a script; they were treating the competition like their job, and they were there to win a law suit."

Lopez gave credit to Little for preparing the team so well for the competition.

"Robert is the best at looking at a mock trial problem and breaking it down to the core issues. With his guidance we were able to go into every round knowing that we had a winning theory of the case. He teaches his students to be lawyers, not actors," he said.

So did the teams care on who actually took first? Not according to Mark Walraven and Little.

"We were really happy, and we didn't really want to know which team won. The round was so close that the judges told me that it could have gone the other way on any given day," Walraven said.

"This is such a remarkable accomplishment that brings great honor to Baylor Law School," said Baylor Law Dean Brad Toben. "I am so thankful to each of our coaches and advocates. Throughout the entire trek to this national championship, they have invested their skills and gifts, over untold hours, to not only win, but dominate."

The win at the NTC highlights what has been a banner year so far for Baylor Law advocacy teams. In 2012, Baylor Law teams won:

Baylor Law advocacy teams are underwritten through the generosity of the M.D. Anderson Foundation.

Baylor University is a private Christian university and a nationally ranked research institution, classified as such with "high research activity" by the Carnegie Foundation for the Advancement of Teaching. The university provides a vibrant campus community for approximately 15,000 students by blending interdisciplinary research with an international reputation for educational excellence and a faculty commitment to teaching and scholarship. Chartered in 1845 by the Republic of Texas through the efforts of Baptist pioneers, Baylor is the oldest, continually operating university in Texas. Located in Waco, Texas, Baylor welcomes students from all 50 states and more than 80 countries to study a broad range of degrees among its 11 nationally recognized academic divisions.

Established in 1849, Baylor Law School was the first law school in Texas and one of the first west of the Mississippi River. Today, the school has more than 7,000 living alumni. It is accredited by the American Bar Association and is a member of the Association of American Law Schools. Baylor Law School has a record of producing outstanding lawyers, many of whom decide on a career in public service. The Law School boasts two Texas governors, members or former members of the U.S. Congress and U.S. Senate, two former directors of the FBI, ambassadors, federal judges, justices of the Texas Supreme Court and members of the Texas Legislature among its notable alumni. In its law specialties rankings, U.S.News & World Report ranked Baylor Law's trial advocacy program as the fifth best in the nation. Baylor Law School is ranked No. 51 in the magazine's 2013 edition of "America's Best Graduate Schools."